Jessica Strawser's Not That I Could Tell

On a seasonal October Saturday night in the bucolic small Ohio town of Yellow Springs, six women—all mothers of young children except the newcomer, Izzy—gather around a patio firepit clutching their baby monitors and enjoy each other’s adult company. Clara, Izzy, Natalie, Randi and Rhoda learn the next morning that Kristen, another member of their party group, and her four-year-old twins are missing. Gone without a trace, which is the mystery component of the novel. 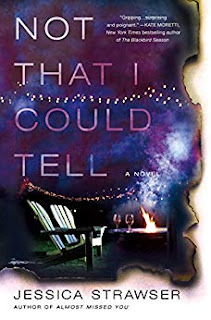 The five women, who are already close friends, pull single, childless newcomer Izzy into their circle. They are bewildered. Kristen is the woman every mother of small children envies and admires--tall, blond, devoted to her twins and obstetrician husband, effortlessly able to handle an administrative job at the local college in addition to her role as a model mother. Throughout the book, Kristen’s internal monologues on the true state of her marriage preface many of the chapters, which is the domestic suspense component of the novel. Kristen’s husband is abusive and she fears for her own life and that of her four-year-old twins.

Strawser ably weaves backstories for the main characters, particularly Clara and Izzy, into the narrative. They have secrets. How and why these secrets are revealed propels the plot.


As the police pursue their investigation into Kristen’s disappearance, Clara realizes she doesn’t know Kristen very well at all. The police learn Clara’s sad past—her office friend was brutally stabbed to death by a former boyfriend during a company Christmas party. Still traumatized from the violence she witnessed, Clara tries to unravel Kristen’s disappearance. Her twelve-year-old sidekick, would-be neighborhood reporter Hallie, eavesdrops on Kristen’s estranged husband Paul and shares the information with Clara. Clara tries to determine if he’s a victim or abuser.


Newcomer Izzy has emotional baggage, including her boyfriend’s betrayal. He dumped Izzy, married her sister, and they are expecting a baby. Lonely Izzy, fed up with her radio station job, gravitates toward Paul while ignoring her neighbors, especially Clara, who warn her to stay away from him.


Strawser has created a world affected by past and present domestic abuse. The neighbors save Izzy from an attempted assault. Life on the cul-de-sac resumes, though Clara’s and Izzy’s lives are permanently altered by Kristen’s disappearance. Strawser includes authentic elements making neighborhood life in a small Ohio town credible—how the police investigate the case, the progressive nursery school the children attend, and the relentless presence of the media. Her pacing is excellent and her characters’ different points of view clearly defined. Kristen’s haunting interior monologues dominate the book:


“Here’s what I know about waiting: It starts as agony, as anxiety. When will the proverbial second shoe drop? It keeps you up nights. But then it gets easier. Because outside of the worry churning in your brain, life is happening. You can’t only wait. So the waiting fades to the back burner, and you can leave it there, moving it to the front occasionally for a stir and then putting it back where you hope it belongs.


Until one day, when something wakes you up from your perch at the stove, and you realize that the wait won’t be much longer. The drop is no longer a distant possibility, it’s a likely outcome. And that’s when you face the facts you’ve been avoiding: That even at the lowest setting, the burners are too hot to stay on forever. You’ll either slowly scorch, or burst into flames—and either way, it won’t be pretty.


Strawser is a Cincinnati resident and editor-at-large at Writers Digest. Not That I Could Tell is her second novel.


Readers and writers, do you find Strawser’s combination of mystery and domestic suspense appealing? Have you read a similar book?

Hi Margaret, You really pulled me in with this review - now I want to know what happens. Another book for my tottering TBR.

Fascinating! I realized as I was reading the review that the book was reminiscent of several I had read, not directly drawn from by any means, but close enough that it set off twinkles of memory. Definitely would be a book to hold my interest.

I sounds like Liane Moriarty. If you haven't--you must read some of her books. She has a way of starting at the ending and working forward. It is suspenseful usually focuses on domestic issues and relationships within neighborhoods and communities. This writer seems of the same genre. They are crime novels, but they aren't presented as such. They're great reads tough.

Sounds like the best of psychological suspense, which I love.

Thanks for pointing me toward an author I didn't know about.