We Have a Jewish Lawn

People who have been reading my posts on my own blog, here at Writers Who Kill, and on my other group blog, The Stiletto Gang, know that I have had to battle disapproving neighbors and the city about my front yard, which is planted in native, drought-hardy plants for the most part. (See recent photos of my yard here.)

The neighbors and the city both would prefer that my husband and I have only bluegrass in my yard, and they’d like to force us to do that. They periodically threaten to come clear-cut our front yard and charge us for it. Fortunately, we’ve been able to fight it for the past eight or nine years. 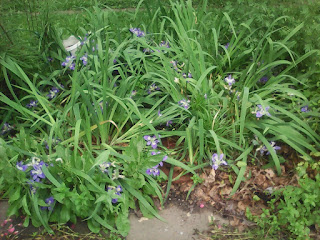 Now, along comes Pat Robertson, that ancient, uber-wealthy televangelist, to give us just the excuse we needed to stand up to the neighbors and the city. Not too long ago, Robertson said on his television show on the Christian Broadcasting Network that you never saw Jews tinkering under their cars or mowing their lawns because they were too busy polishing their diamonds. My husband, who’s Jewish, sent me the link to the video.

He included a subject line in his email that read, “We Have a Jewish Lawn,” referring, of course, to the problems with the city. 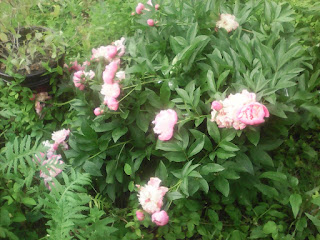 I watched the video with the demented old rich televangelist and emailed my husband back. “You’re right. We do. But where are the diamonds?”

And I’m still waiting, darn it!

For her books of poetry, Skin Hunger and Heart’s Migration, Rodriguez received numerous awards and fellowships. Rodriguez was 2015 chair of the AWP Indigenous/Aboriginal American Writer’s Caucus, immediate past president of the Border Crimes chapter of Sisters in Crime, a founding board member of Latino Writers Collective and The Writers Place, and a member of International Thriller Writers, Wordcraft Circle of Native American Writers and Storytellers, and Kansas City Cherokee Community. Find her at http://lindarodriguezwrites.blogspot.com.
Posted by Linda Rodriguez at 12:59 AM

I welcome your lawn to the tribe. Diamonds to be delivered next week.

Native plants are ideal, especially if they serve the bird, butterfly, and bee communities. No fertilizer, no pesticides, no contaminated run-off water. What's not to like?

How about a beehive and chicken coop?

Ah ha! Now I know the inspiration for your story in Kansas City Noir.

Lawns are overrated. Not diamonds, though. Hope you find yours soon!

After watching my neighbor spray every single weed in his yard with TWO different kinds of chemicals, I can only say I wish he had a Jewish lawn.
And Barb, put me on the diamond delivery list!

What in heaven's name is wrong with your lawn? Has your town ever heard of the English garden? Your's looks delightful! Not too crazy about diamonds, but emeralds...well, sign me up!

Glad I live back in the woods, where nobody cares (or even knows) how much mowing I do.

Hey, I'm with you, Linda. Fortunately I live in a rural area where no one cares except my son who complains sometimes about how overgrown my place is. I consider dandelions little bursts of sunshine in the spring. Yes, I'd love to have weed free gardens, but that will never happen until I come up with enough money to hire three full time gardeners which will never happen. The cool thing is that most people think I have lovely wild gardens. They can't tell the difference between weeds and planted perennials. Last month some spring beauties and some purple flowers came up in my front lawn. Instead of mowing them down, I mowed around the patch and left the grass and flowers grow until the flowers were done blooming. No smooth close cut lawn like the neighbors across the street. I think your lawn is beautiful. No golf course lawn for me, either.

I know first-hand how beautiful your yard is, Linda. Your neighbors would be horrified by my overgrown yard, but the birds and bees and butterflies love it. One of the joys of country living is if the neighbors are complaining, I can't hear them. :)

Sorry I'm late in responding, but I've been out of town for the holiday.

Margaret, yes. All organic. And tons of bees, butterflies, and birds. But the city won't allow either beehives or chickens.

Carla, actually I'm not a big fan of diamonds. I've always told Ben he's lucky because I don't like diamonds or furs.

Shari, my neighbor has big tanker trucks come spray his lawn every few days. His yard is basically a mono-crop desert.

They bandy about the term "property values, Kait . Apparently having a neighbor who doesn't have a perfect lawn brings down property values.

Gloria, you have a really big lot, don't you?

Julie, I wouldn't care if my neighbors just complained, but they call the city on us. I've been dragged into housing court under threat of arrest before.