Like most mystery writers, I find nothing strange about enjoying a spring afternoon stroll in a cemetery. Cemeteries are a Who’s Who of a community, each burial a story of a soul who walked the streets of a town that will be populated by my characters. There’s much to learn and contemplate about a place and its history in its cemeteries. 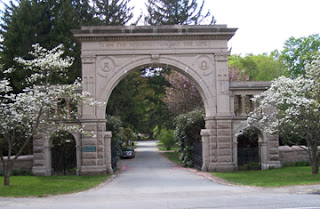 That’s why a couple of weekends ago I found myself driving through the tourist area of historic Mystic, Connecticut, past bustling shopping centers, outlet shops, and families enjoying ice cream cones at Twisters into the hushed beauty of historic Elm Grove Cemetery. Passing under its magnificent arch inscribed with the words “I am the resurrection and the life,” I entered a place that maintains its serenity despite being bordered by busy tourist attractions to the north and south.

After solving one of the eternal questions - where does one park in a cemetery? – my good sport husband and I found a place near the lovely memorial chapel and began our walk.


The Mystic area has many cemeteries, graveyards, and burial grounds. What’s the difference? The term “cemetery” came into use in the Victorian era, when a change in attitude toward death saw this term, from the Greek for “put to rest,” replace the term graveyard. 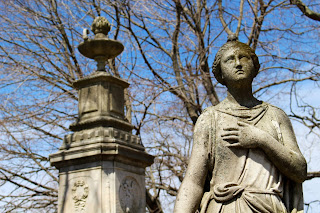 The mid nineteenth century saw a philosophical and physical evolution from the smaller colonial graveyards and burial grounds, with their flinty gray headstones ornamented with winged skulls, hour glasses, and crossed bones. The Victorians preferred to think of death as an eternal rest, and ornamented their graves with contemplative angels, urns, and weeping willows, turning from the pragmatic view of death as a bitter end. Indeed, one stone I passed in Elm Grove was engraved with the words “resting time.”

In 1822, a yellow fever epidemic in New York City killed over 15,000 people. Doctors traced the epicenter of the epidemic to an overcrowded cemetery at Trinity Church. This discovery encouraged moving burials away from populated areas and the rural cemetery movement was born. This coincided with the more Victorian view of death as an eternal slumber, and by the middle of the 19th century, rural cemeteries were considered a sign of a city’s progressivism and prosperity. 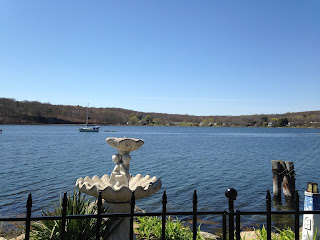 Following the successful example of Mount Auburn Cemetery in Cambridge, MA, Elm Grove has a park-like setting with narrow lanes curving through the gentle green landscape. Unlike Mount Auburn, Elm Grove occupies a site overlooking the  Mystic River. It is an exceptionally pleasant place to walk with its million dollar views of the river and the charming historic houses lining the far shore. Colorful sailboats flit between the weeping willows and the tall, marble obelisks favored by Victorian mourners. I can’t help but think that those interred in this place enjoy the view and the spanking wind on this sunny day as much as I do.

Long branches of a weeping willow stroke the ground near the duck pond. The cemetery is delightful on this sunny day, but at night I can only imagine the shadowy gothic pleasures of the place.

For a writer grounding herself in a particular place, cemeteries offer much helpful information. Elm Grove is a Who’s Who of the well-heeled of Mystic, CT past, one of the settings in my upcoming Lazy Mermaid Lobster Shack mystery series. The names engraved on the headstones - Cottrell, Hoxie, Minor, Tingley, Spicer - evoke the New England setting. So many women were named Phebe, Sara, and Hattie that I have a strong feeling that these names will hang on my characters’ family trees.

Some of the inscriptions bring into focus long ago events and how locals viewed them. Young Hubert Ellery Maxson gave his life for his country in 1861 “after serving two terms in the armies of the union for the suppression of the Southern rebellion.” 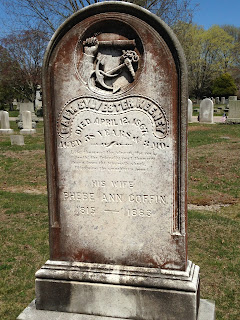 Because Mystic was and is an important maritime town, Elm Grove is full not just of typical Victorian mourning symbols. Its monuments feature artwork that honors those who made their living on and from the sea. Anchors, ships, and scientific equipment are some of the unusual motifs carved into several headstones. One stone, with a sailboat rendered, reads “Imagine the excitement on the other shore.”

Cemeteries also offer mysteries. One headstone is inscribed “Matilda, consort of….” Consort? Almost all other headstones proclaim “wife.” Sounds like there’s a story there.

Cemeteries are great places to visit. They honor the dead and provoke imaginative stories and memories. They can also hint at what life must have been like for previous generations.

The one at Mystic must reflect the sea-going nature of the area. In a time when many were lost at sea, I wouldn't be surprised if it held many more women than men. I can remember my grandmother, who worked in a chandler's shop in Boston, talking about the ship's captain she'd hoped to marry, but whose ship never returned.

I hadn't thought of those who didn't return from those seagoing voyages, Kathleen. How sad for your grandmother! The Mystic area is full of houses with widow's walks on the tops of the houses (enclosed areas where wives would watch the harbor for the return of their husband's ships). Many loved ones didn't ever make it home.

my favorite is Lafayette Cemetery in New Orleans, where I found a poignant and deeply moving story which, in deference to the family, I won't write about.

I love exploring a new cemetery, seeing generations of a family together, wondering about past epidemics or military casualties.

Yes, I like to wander around cemeteries. Tours are frequently offered in cemeteries in St. Louis. Bellefontaine and Calvary Cemeteries are adjacent to one another in North St. Louis. These two lovely cemeteries are the resting places for several historical figures, including Tennessee Williams, Sara Teasdale, General William T. Sherman, and William Clark (of Lewis and Clark).

The Great Manhattan Mystery Conclave used to sponsor a tour as part of the conclave.

Cemeteries are wonderful places to roam. OK, maybe it's not everyone's cup of tea, but I find them peaceful, and from a writer's standpoint, inspirational. The older the better for me. The bronze plaque set in the ground doesn't have the same appeal somehow. I don't know if they still allow it, but I had a friend who traced a series of old stones of her ancestors in Great Britain. They were beautiful artwork.

Hi Margaret, now you've got us all thinking! Is the Lafayette Cemetery the one in the Garden District? It is spectacular. And I like your point about learning history from cemeteries - so true.

Hi Kait, It's nice to be among friends who understand this enjoyment of cemeteries! Some of the artwork in cemeteries is so lovely, and I hope to do some cemetery wandering next time I'm in the UK. I just remember the grand memorials in Westminster Cathedral - so stirring to the imagination.

I love reading headstones and puzzling out or inventing relationships. Sometimes the stories are tragic: three or four members killed the same day (a fire?), or within a couple of weeks (cholera? Scarlet fever?), boys’ lives cut short in war, a woman’s death the day her last child was born.

I have a 19th century print of a scene from Mt. Auburn Cemetery – it’s of a ridge that is known to birdwatchers as a great place to view warblers as the tree tops are at eye level and you aren’t subjected to “warbler neck” from craning your head back to try to spot birds flitting high among the branches.

I've been interested in cemeteries since my grandfather discovered an old forgotten pioneer cemetery in the woods dating back to the early 1800s, when he was haunting. Most of Ohio wasn't settled before that time. There was an officer of the Revolutionary War buried there. Almost every year my family visited that isolated cemetery with most of the stones no longer
standing, but lying down.

I did an depth paper on cemeteries, their history and how they'd started close to churches and then moved further away, and while I was working on this paper, I toured old cemeteries near by. They were fascinating, especially those with epitaphs. In fact, once I started teaching, I did a unit on the early settlers of Hiram, Ohio, and had the students pick one of the settlers, who I knew was buried in the oldest part of the cemetery to keep a journal as that settler as we studied the early pioneers. Late May we took a field trip to that cemetery, and you can't imagine the shouts and squeals when those kids found the graves of who they had pretended to be. I had not told them in advance. One little girl said, I'm buried here and I have four children.

On vacations I've visited many famous people's graves like Emily Dickinson's, Louisa Mae Alcott, Abraham Lincoln and so many others. I especially like visiting cemeteries with gravestones that have an epitaph or their picture. When my oldest son died at eighteen from
cancer, I not only had his picture put on the stone, but an epitaph -"He lived with enthusiasm, laughter, magic and dreams. Heaven is his biggest adventure." He was a very talented magician so I put three linking rings on the stone along with a dove. Symbolic both of his magic and God.

Jim, I am going to keep the warbler ridge at Mt. Auburn in mind for my next visit to Boston.

Gloria, once again I am in awe of your teaching creativity. I wish I could have been there when the children discovered their settlers! And I love your son's epitaph - Heaven is the biggest adventure.

Thank you, Shari. He's in a cemetery where I have many ancestors from the 1800s as well as my great-grandparents, my grandparents, my parents, and some aunts and uncles as well as a six year old granddaughter. There's still a spot for me, too. That's one of the reasons I like living so close to my roots.

While walking in Mt. Auburn Cemetery, where some of my relatives are buried and where a few of my characters would have been buried as well, I happened upon my own grave stone. The woman's name was spelled the same as mine, her date of birth was 100 years prior to my own, almost to the day. It is amazing what you find in old burial grounds.

You had me a cemeteries. I was a genealogist long before I was a writer, and I've spent a lot of time in cemeteries, hunting for Massachusetts ancestors. My husband and I used to go on cemetery dates before we were married, and somehow I infected my daughter (when on a school-sponsored trip to France in high school, when most of her friends were hanging out in cafes, she went to the Pere Lachaise cemetery in Paris).

When I was 17, my mother and grandmother and I visited Sleepy Hollow Cemetery in Concord, MA (the one where the Concord authors are buried). A family member bought a plot there in 1893, and my grandmother attended the last burial there in 1935. It was a good number of years later that I realized that my sister and I are the only living descendants of the family now, so we own the plot. I contacted the town to confirm our claim to it, and I plan to be buried there--and it's right down the hill from Authors Ridge. And, yes, I've used that cemetery in a book, as well as others.

Blame my mother. She taught me to walk in a cemetery, when the tombstones must have been taller than I was.