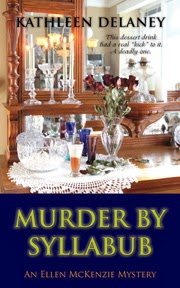 Do you have a plotting method?

Not exactly. I usually start with an idea. When I decided to write Dying for a Change I was living in a small town in California that was about to get a Wal-Mart. The town was in an uproar, some for, some against, and the conflict gave me the idea for the book. The rest sort of grew, and that’s how it happens with each of them.

Unlike the rest of your series, your latest release, Murder By Syllabub, takes place in Williamsburg, Virginia. Was there any particular reason why you decided to take your cast there?

I took a chance on that one. I love Williamsburg, having been there several times. That period in our history, the formation years and all that lead up to it fascinates me. I have long wanted to lay a story there, but I didn’t want to set it in the eighteenth century. Moving Ellen and Aunt Mary there for one mystery seemed a good idea, and it worked out. 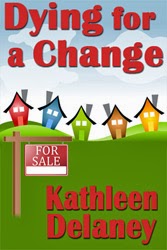 To research the book, you learned about colonial hearth cooking, which I loved reading. What is syllabub, and was there anything you learned surprising?

Syllabub is a colonial dessert drink. It is made with lemon, sugar, white wine and cream. Today we whip the cream, back then, I’m told they milked the cow right into the drink, which doesn’t appeal to me at all. What was surprising was how similar some of our food is to what was prepared then. My spinach salad looked a lot like the one prepared in the Peyton Randolph house and we frequently cook meat on a spit over a fire, only we use a barbeque.

In the first book, Dying for a Change, Ellen is a woman in transition. Why did she stay with her awful ex, Brian, so long?

Ellen, like a a lot of women, stayed for several reasons. Her daughter, economics, and plain not knowing what else to do. He was verbally abusive, but she wasn’t worried he’d kill her, so it took longer to work up the courage to call it quits.

Are lawyers the root of evil?

No, I don’t think so, at least not all of them. Some of them are avenging angels to some women. Especially the female ones.

Susannah, Ellen’s daughter, doesn’t seem to be cautious about relationships. Did Ellen keep the truth about her first marriage from Susannah or is she just young and in love?

She kept the truth from her for a long time, but as Susannah grew, she also started to understand what 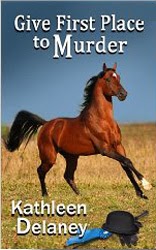 kind of man her father was. She and her mother were close, her father indifferent, so it wasn’t much of a choice who she would live with, and she really likes and respects Dan.

Santa Louisa seems to be a small town that could be located anywhere. But, it is on the central California coast. Why no beach or boating scenes?

The town Santa Louisa is very loosely patterned after is Paso Robles, where I lived at the time. It is somewhat inland from the coast, and grows tons of grapes, some cows and horses, and has lots of rolling hills and huge old oaks. They’ve gone over the hill for dinner, but don’t live near the water.

Ellen and Dan don’t seem to fight. Will they ever go head-to-head?

Like the old Spencer Tracy/Katharine Hepburn movies? No, I don’t think so. Spats, misunderstandings that they will be able so solve, but on the whole, they understand and respect each other and bitter fighting just isn’t in their relationship. 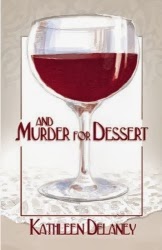 Everyone should have an Aunt Mary, did you?

My mother was as close as I got to one, but she was wonderful. I could talk to her about anything and she had a pretty clear-eyed view of the world.

You’ve had many dogs. Will Ellen and Dan get a dog?

Jake won’t allow it but I’m planning on giving Aunt Mary one.

Of all the places you’ve lived, which have you liked best?

That one’s tough. I lived in Paso Robles where I wrote the first three books. I loved it, but when it came to retire from real estate I wanted to try somewhere I’d never lived before. The south had always fascinated me, the mountains, the small towns, the history, so I moved to S. Carolina. Am now in Georgia, which is beautiful but the traffic around Atlanta is as bad as LA.

In Murder Half-Baked, you return to the theme on women in transition. But this time, it’s not Ellen. Playing a central part in this mystery, Grace House, a charity, serves women who are going through transition from whatever those transitions may stem, divorce, spouse abuse, alcoholism, etc. What is 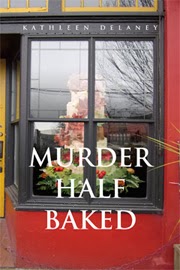 it about transition that interests you?

I think everyone goes through many transitions in their life but some women end up going through all of the things you mentioned. I have met a number of them, some were friends. I did a lot of research on this before I wrote the book, and continue to be particularly interested in women who can get themselves out of pretty awful spots.

You switched from Poison Pen Press to Camel Press as your publisher. Why?

I had contract with PPP for another book, but during the writing process I ended up in the hospital
with an amputated leg. It took a while to get through re-hab and adjust to my new life. The manuscript I turned into them wasn’t the one I wanted to write, and it wasn’t much like the final version, but it look a lot longer to get to that point, and it seemed best for us to go our separate ways. They are a great press, and I am proud to have had them release one of my books, but Camel is also a great press with great people. I feel fortunate to be with them.

You’ve traveled, having mentioned traveling from coast to coast in this country and all around Europe. But which do you like better, beach or mountain?

Mountains. The beach is lovely, and I grew up in S Cal., so have spent a lot of time on it, but I love the beauty of the trees, the mountain springs, everything about the mountains. I’m near the Blue Ridge National Park and have visited it many times since I’ve arrived in the south.

For further reading about Kathleen's delightful mystery series go to her website.
Posted by E. B. Davis at 12:00 AM

I now have some more books to add to my TBR list! I love visiting Williamsburg, too, and it will be fun to read a book set there.

Thanks for sharing some details of your writing career with us.

If there is a theme for writers who share with us, it is persistence. Thanks for sharing.

Welcome to WWK, Kathleen. Like KM, I now have even more books to add to my TBR list. I visited Wiliaimsburg once and want to go again especially since one of my former students works there in some role or other.

Like you, I prefer the mountains and all they have to offer; beauty, serenity, peace and trees.

Kathleen, welcome to WWK! It was so good to meet you in Alabama at Murder in the Magic City and Murder on the Menu. I'm looking forward to reading your books.

Thanks for stopping by, Kathleen! The books look great!

If you do, be sure to drop by the Payton Randolph house and visit the kitchen. Quite an experience. Thank you all for your comments and your welcome. I've enjoyed this.

Thank you, Kathleen, for sharing your insights. I, too, think the transitions we make in life make for fascinating reading. Thanks for stopping by!

I happened on Kathleen's series on Amazon. One of those happy serendipity things. I loved reading them and hit the buy button again, and again, etc. Thanks for the fun reads, Kathleen, and keep them coming.

What a great interview! I travel through Paso Robles often as we head to the coast. Lived over 20 years in Oxnard, a mile from the beach, now live in the foothills of the Sierra.

Wonderful interview, Kathleen. I enjoyed learning about you. I have a step-niece who owns a B&B in the uarea and she loves it there. It looks like I'll be adding Delaney books to my TBR stack.
Marja McGraw

Enjoyed Murder by Syllabub. We miss you in South Carolina, and I'm sure we'll have more lunches on the border.