JMJ:  Welcome to Writers Who Kill, William. You are known as the author of a new e-book mystery genre, the diplomatic mystery. What is it, and how did you come up with the idea?

WSS: I was a career diplomat in the American Foreign Service for 25 years and served in five Embassies abroad, as well as extensively at home in Washington, in the Department of State and on Capitol Hill. One day while on duty in State, I was reading the varied in-box material, intelligence and diplomatic reports, and it occurred to me that a sleuth who was a diplomat would have access to several cultures – and be perfectly placed to solve international crimes. Since retirement, I have followed through with this idea. My sleuth is a midgrade diplomat named Robbie Cutler. He has a talent for detection and uses those skills to solve overseas crimes, some even taking place in our Embassies.
JMJ: Doesn’t he run up against local jurisdiction?
WSS: Actually, they work together. For example, Vintage Murder, the first book in the series, takes place in Bordeaux. The murderer, a Basque terrorist, is thought to be an American by his accent. It turns out that he went to school in the United States, so a search of the visa files is useful in tracking him down. In the sequel, Murder On The Danube, Cutler is transferred to the American Embassy in Budapest. A prominent American citizen is murdered in the hills of the city, and Robbie must track down his killer. That involves searching through the past and finding out who might have betrayed a resistance group during the street fighting of the Hungarian Revolution. It doesn’t help that all the official records of those days are now sealed!
JMJ: One of the things I enjoy about series is how the continuing characters evolve. How does that play out for Robbie?
WSS: There is a continuing romance. Robbie meets Sylvie Marceau, a journalist, in Vintage Murder, and she helps him solve the crimes there. They become engaged in Murder on the Danube. The third book in the series, Murder in Dordogne, takes place during their honeymoon in that beautiful region of southwestern France.
JMJ: Murder on one’s honeymoon, how rude. Corpus delecti interruptus
WSS: Yes, there ought to be a law! Another continuing character, Robbie’s Great Uncle Seth Cutler, has turned out to be a reader favorite. He is nationally prominent and started as an OSS agent in London during WWII, then had a CIA connection, and is still highly placed to find out what is really going on in Washington. He became a preparatory school headmaster, broadened his school by admitting minorities and women, and was chosen as Time Magazine’s Man Of The Year. The cover was a New England school scene, with a background of agents being parachuted into Occupied France.
JMJ: Uncle Seth sounds like quite the guy, but how does an 85+ year old fit into the plots?
WSS: Well, Robbie is a midlevel diplomat, and for the plots to evolve, he needs access, which a real midlevel diplomat in one Embassy would not have. But even in his late retirement Uncle Seth has that access, and furnishes background information to Robbie that helps him track solutions to the crimes he uncovers. Also, he is internationally known, and can open doors for Robbie. In Murder in Dordogne, by the way, the first murder victim discovered (in a cave not far from the famous prehistoric caves of Lascaux) is Uncle Seth’s long lost fiancée. She was an operative for SOE, the British group of couriers and radio operators who helped the French Resistance. But she never came back from the war. So Robbie has a crime to solve that is of direct interest to his family. Of course someone starts shooting at him and his bride and off we go!
JMJ: I hear that you have a new book in the series. Tell us about it. 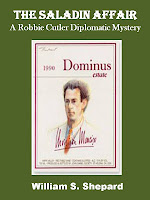 WSS: Yes. In The Saladin Affair Robbie has been assigned as Special Assistant to the Secretary of State. His job is to help plan trips. He accompanies the new Secretary on Air Force Two to six European capitals: Dublin, London, Paris, Vienna, Riga and Moscow. Along the way, Al Qaeda, hoping to profit from the September 11, 2012 killings in Benghazi, Libya, tries to assassinate the Secretary and his party. At the same time, the American Ambassador to Dublin is murdered in her official residence in Phoenix Park, so Robbie’s detecting skills have to do double duty!
JMJ: It sounds very timely. Have you written other types of e-books as well?
WSS: Yes. I enjoy American history, and my Ebook Maryland in the Civil War tracks the crucially important border state throughout the war – starting with the close decision not to secede! And America’s Unknown Wars concerns five wars, from colonial New England to the Spanish-American War, which vitally affected our national development. Let me also mention my wine book, Shepard’s Guide to Mastering French Wines. I served as Consul General in Bordeaux, and that experience led to this practical and comprehensive guide.
JMJ: Many thanks for joining “Writers Who Kill” today. Here are the links for learn more about William or (gasp) buy his latest book.
www.diplomaticmysteries.com
www.facebook.com/RobbieCutler
The Saladin Affair (Robbie Cutler Diplomatic Mysteries)

Congratulations on your choice of employment for your character. It's more believable than many mysteries. And thanks for stopping by,

I love how he used his career to enrich his work. Fascinating!

I appreciate your comments. This morning I had a real treat - while shopping in the local Giant, a lady stopped me and said that she was enjoying "The Saladin Affair," and would I talk to her reading club next month? You bet!!

William--Your series interests me. I think like most readers, I'd like Uncle Seth. I've read a lot of books set during WWII in England and learned about the brave people who served in the OSS.

One of my WIP's MC sells champagnes and sparkling wines. How did you come by your French wine knowledge? Your book on the subject was surprising.

To answer E.B.'s question, I was fortunate enough to be Consul General in Bordeaux, so I got to know the great vineyards well. And a friend in the british diplomatic service served in Lyon, so in visiting with him, I got to know Burgundy. Before that, I was usually to be found with a glass of Mateus Rose !
Glad several have raised an interest in the diplomatic mysteries. I hope you enjoy "The Saladin Affair," but most people like to start with the first book in the series, "Vintage Murder," which actually takes place in Bordeaux.
William Shepard

I am looking forward to reading all of these. The parts of your memoir I have read thus far are fascinating.

I think I would really enjoy this series, but I don't have an e-reader and find reading anything on the computer for any length of time tiring for my eyes. Is there a chance of your books coming out in print eventually?

Several of my books are in print. Just look them up at Amazon.com.
William Shepard