MINCEMEAT IS FOR MURDER 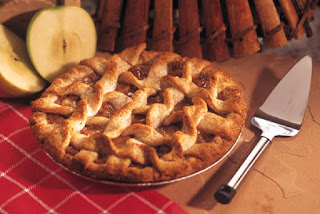 It’s a nice funeral if I do say so myself. Lots of pretty flowers. I ‘specially like the spray of roses on the casket. Red roses for love. Lots more people showed up than I would’ve expected. Tom’s pretty broken up. I feel bad about that. I certainly didn’t want him hurt. Reverend Martin had nice words to say at the end of the callin' hours last night. I’ve always liked him. He’s a good man for a preacher. He’ll probably have some more good words to say during the service later, too.
When the results of the autopsy come back, they’ll find out it was arsenic. I made sure only one tiny area, enough for one slice, had the arsenic. Knowin’ Ma Edna, I knew she’d eat the whole special pie I’d made just for her. When the rest of the pie is checked, if there’s any left, they won’t find arsenic in it. I didn’t have to worry about Pa since he don’t like mincemeat pie anymore than Tom does.  I made sure I ate a small piece of the pie so as no one would suspect me, and no one would know how she got the arsenic.
I can’t believe somehow her special pie got switched with the one I made for the Thanksgivin’ dinner. I sure never thought about that happenin’. I just heard Ma Edna say somethin’ almost nice about me. She said, “Alice made a mean mincemeat pie, and now she’s takin’ her secret ingredient to the grave with her so we won’t have nothin’ like it again.”

So what's your favorite pie? I'll bet it's not mincemeat.

Great story! You're right: mincemeat isn't one of my favorites. It's nowhere on the list. Someone should change that name. "Mincemeat." Ugh. Thanks for the story, though. Great voice!

Yes, I loved the voice, Gloria. Very distinctive. It made this story.

Thank you, Marilyn, Rhonda and E.B.

I like mincemeat okay, but not enough to eat more than a tiny sliver and that hasn't been in years. You're right, Rhonda, it is misnamed. There is no meat in it.

Well dang, you'll have to try somethin' else next year. Does she like eggnog?

Gloria, this was fun. What did Tolstoy say about unhappy families each being unhappy in its own way?

Thanks, Kaye. I'll keep that in mind.

I didn't know that E.B. It makes sense that was the case because of the name.

LOVE your story. Mincemeat used to be my favorite, but now I'm just a trace hesitant. Since I'm the only one in my family who likes it, and all. :)

Thank you, Kara. Since I don't bother making pies anymore and others in my family don't make it, it will probably be a long time before I eat another piece.

Kath, since you're the only one in your family who likes it, maybe you should be a little hesitant. Have any issues with any of them?

Gloria, what a great story. I haven't had mincemeat pie in a long time. Now I'll have to have a taste of one in your honor this holiday!

I'm not a mincemeat pie fan myself. When I used to do a lot of baking for the holidays, I'd make one because some of the older generation liked it. I'd eat a little sliver myself. Now, that generations' mostly gone, no one else likes it, and I don't do all the baking I did for the holidays. So, no mincemeat pie. Probably just as well, given your story. :-)

Thank you, Linda. It's probably best not to make it. My mother used to like mincemeat pie so we always had it for holidays. I used to make a delicious fruitcake with mincemeat in it, but then again, I was one of only a few who liked fruitcake, too.