We are past the season of fairs and fall festivals, of Halloween and All Saints’ Day. We look forward to Thanksgiving, Christmas, Hanukkah, Kwanza, and celebrating the beginning of a new year.

Because I began with this blog in October and share a post, this must be my holiday message as well as my last post for the year. Consequently, I’ll harken back to some of the special times now passed in order to look forward with joy for those yet to come. As Charles Dickens wrote in A Christmas Carol, “There is no doubt that Marley was dead. This must be distinctly understood, or nothing wonderful can come of the story I am going to relate.” Similarly, let me paraphrase, although the time for fairs is gone this year, something truly wonderful may come from the memories they have generated.

In fact, two well-known icons associated with fairs are celebrating their sixtieth anniversaries this year. The first is Big Tex, the huge waving mascot of the Texas State Fair in Dallas, which unfortunately caught fire and must now be rebuilt.
The second is the original publication of the beloved children’s classic Charlotte’s Web by E.B. White, the story of Wilbur the pig whose life was saved by a creative spider that spun glowing reviews about him in the strands of her web. White used his own childhood memories from growing up on a farm in upstate New York to develop the characters heralded as successors to Alice’s rabbit hole and Dorothy’s Oz. Like Lewis Carroll and Frank Baum, E.B. White found his story in his own backyard. Rare insight into the reclusive White’s life may be gained from a new biography written by Michael Sims. In the forward to The Story of Charlotte’s Web, Sims describes visiting the farm where White lived as a boy and seeing the barn where spider webs still cling to the rafters. 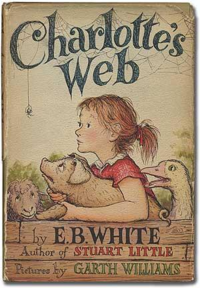 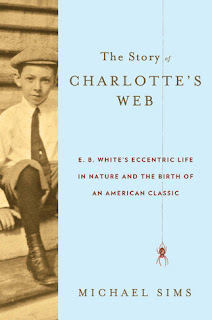 In an interview on CBS Sunday Morning, Sims told about White’s great difficulty to make an audio recording of Charlotte’s final scene. Even though White protested that Charlotte was “only a spider,” his stumbling over the passage about her death showed that she had become more to her author, just as she had to readers.

Sims characterized the book as being about death. Certainly, I agree that death plays a large part of the story, but I consider Charlotte's Web a book about how to live your life well. After all, who wouldn't want to be remembered as "a good writer and a good friend"?

Maybe my perception of the book comes in part from the person who gave it to me. This wonderful lady was a widow with a disabled adult son. She had befriended my parents before they married, encouraged them, helped them to find jobs, and remained close to them through correspondence when they moved away from the city where she lived. After I was born, she sent me a hard-covered, well-loved book each year for Christmas. How I looked forward to receiving those presents in the mail! I did not have a chance to meet this woman personally until I was a teenager, but I cherished her kindness extended toward a child she did not know except through letters.

In remembrance of her, for Christmas each year, I give the children in my life hard-cover books that are their own to keep and love. Her gifts meant that much to me.

A splendid memory remains with you throughout life, even after you move beyond it to other adventures. Papa Hemingway is credited with saying, "If you are lucky enough to have lived in Paris as a young man, then wherever you go for the rest of your life, it stays with you, for Paris is a moveable feast."

Throughout the year, not just at holidays, may you and yours find books to be a source of strength, support, knowledge, encouragement, and recognition. May they be your moveable feast. And, like Scrooge, may you live in the past, present, and future through books, the memories they bring you, and the memories they help you pass on to others.
Posted by Paula Gail Benson at 12:00 AM

Important theme here. I love it that you give children hardbound books--what a great tradition.

Isn't it interesting what memories stick with us and how they affect us decades after the event.

Each year for the holidays I give my three grammar school aged grandchildren a stack of books. All three are readers, which I think is great.

I was once introduced by one of the grandkids to her friend as, "This is Jim. He's the one who gives me books."

Books are a part of some of my best memories. I remember reading Wind in the Willows at my grandparents house.

My "Charlotte's Web" is A Child's Garden of Verses by Robert Louis Stevenson. My original version from the 1950s has scenes from Edwardian England illustrated beside all the poems. As a child, I could relate, but it also gave me insight to how those children in my grandparents' generation grew up. I felt linked to them. It will always be my all-time childhood favorite. I wish my children were more literary bent. However, what I think they will remember are all the stories I created for them, and we acted them out together--The Adventures of Kitty and Turtle. I was sort of the narrator. Yeah, being a story teller requires you to be a child. Let's pretend!

I have wonderful memories of being read to as a child. When I was older I read some of the same books to the children in my life. I think that sharing memories based on the same book is pretty special!

There's no finer gift than a book. That's a wonderful tradition to carry on!

I was 15 before we got a TV. Books were always important in our house. Even though my parents struggled raising five kids (a 6th was born after I got married) they belonged to a book club and bought books. It was considered a necessity almost as much as food.
My favorite books I got at Christmas were Thunderhead, My Friend Flicka and Lad a Dog.

When I was teaching 3rd grade I saved the bonus points I got from the book clubs like Scholastic News and before Christmas, I got a large amount of books and let my students pick out a book as their Christmas gift from me.

What wonderful comments! I remember a few years ago a video of a child throwing a tantrum because he was given a book instead of a toy. I was so glad the children I gave books to sat beneath the Christmas tree and read them! Thank you for sharing your memories here. E.B., I want to hear about Kitty and Turtle.

Only with Kitty and Turtle's permission, Paula, and Turtle is now on his honeymoon! It will have to wait. We had many adventures. If only I had an illustrator!