An Interview with Amanda Flower 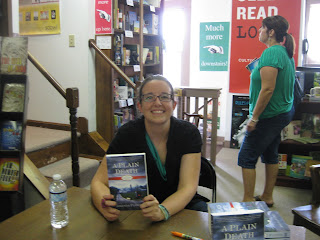 Today Amanda Flower is visiting us. I first met Amanda three years ago when I was invited to join a group of Cleveland mystery writers and fans. Eventually, we formed a chapter of Sisters in Crime. When her first book was nominated for an Agatha, I went to Malice Domestic with her, and I got to know her better. Amanda is a delightful person and her books are just as delightful. Welcome Amanda.
GA         With three series going, you are now a well-published writer. When did you start writing and why mysteries?
AF     I’ve always wanted to be an author, and mysteries have always been my favorite books. I started writing my first mystery novel in college. That book would eventually become Maid of Murder.
GA      Your first series is the India Hayes Mysteries. The first was Maid of Murder which was an Agatha Award nominee for best first novel. This series is considered as humorous cozies. Tell us a little about them.
AF       My India Hayes Mysteries stars a sarcastic college librarian. She has an eccentric cast of characters around her including family, friends and pets. In Maid of Murder, she reluctantly investigates a bride’s murder, and in Murder in a Basket, she reluctantly investigates a basket weaver’s murder. Despite India’s grumblings, she becomes involved in these murder investigations because she has a big heart and wants to help people.
GA       Your second series, The Appleseed Creek Mysteries starts with A Plain Death. It's an Amish
mystery. Tell us about your first book.


AF         In A Plain Death, an unlikely friendship between a high-tech woman and a runaway Amish girl leads to murder. Her first day in Appleseed Creek, Ohio, Chloe Humphrey, befriends Becky, an ex-Amish teenager looking for a new home. While driving Chloe’s car, Becky collides with a buggy, killing an Amish bishop in the process. The case moves from accident to murder when police reveal a cut brake line. Now Chloe and Becky's handsome brother, Timothy, must discover who the real intended victim is before the murderer makes a second attempt.
Book two, A Plain Scandal, releases February 15, 2013


GA       I think most writers show something of themselves in their protagonist. In what way are India Hayes and Chloe Humphrey like you?
AF         That’s true for me, too. Like India, I’m a college librarian, and like Chloe, I moved to Ohio’s Amish country when I was twenty-four to take my first “real job” at a small rural college. As far as my personality, I’m somewhere between India’s sarcasm and Chloe’s sweetness . . . at least I hope to be.
GA         You have a new series coming out next year with Penguin: The Amish Quilt Shop Mysteries. You'll be writing as Isabella Alan in this series. Tell us a little about the first book; Murder Plain and Simple and why you’re writing under a pen name.
AF         Here’s the blurb for Murder Plain and Simple: When thirty-four year old Angie Braddock moves back to Ohio to recover from a broken heart and inherit her Amish aunt’s quilt shop, she discovers there is more to the Ohio’s Amish than beautiful quilts and hearty food. With the help of her quilting circle, Angie stumbles into the unlikely role of amateur sleuth.
I will be writing with a pen name for this series at the publisher’s request because the concept for the series was my editor’s idea. I’m very happy to say that I’ve made it my own. A few weeks before book one releases in September 2013, an e-special novella, Plainly Murder, will release on all e-book formats. It’s a prequel to the series.
GA       Setting is important in your books. Why did you choose the setting you did for the India Hayes series?
AF       The India Hayes series is set in my region of Ohio, which is part of the Western Reserve. I love Ohio, especially Northeast Ohio. It never occurred to me to set my first novel anywhere else.
GA       Your next two series both take place in Amish communities. I live near the Amish and am quite familiar with their customs. I find your first book A Plain Death true to their customs and to the Englischers who live in the community, too. That’s important to readers like me who are familiar with both the area and the Amish. How were you able to make it so believable?
AF       I lived in Amish Country for three years and saw Amish people on a daily basis. However, when I lived there, it never occurred to me to write an Amish novel. Even not knowing that I would write about the Amish, I absorbed what it was like to live in a rural Ohio county and what it was like to live near Amish. When I decided to write a novel with Amish characters, I did a lot of research. I studied their history, beliefs and rules. I interviewed former Amish young men and friends who had close ties to the Amish. Also, I visit Amish Country every few months. I have the luxury to go as often as I like because Holmes County, which has the largest concentration of Amish in the world, is only an hour away from my house.
GA       You work full time as a college librarian. I wonder how you manage your time to write three series and where do you write?
AF       I get this question all the time, and honestly, I don’t know how to answer it. I guess it’s the little things I do that really make the writing happen. I have a word count goal for every week and stick to it. Sometimes that means I’m cramming words in on the weekend to make the goal. My publishers give me deadlines for my books, but I give myself tighter deadlines because I write for multiple publishers and sometimes have books due within days of each other. I don’t really need any help motivating myself. I’m a tough task master, at least where my writing is concerned.
GA       Tell us something about yourself not necessarily connected with your writing that we would like to know about you. Hobbies (as if you have time), dreams for the future, family, pets, interests, etc.
AF       I celebrate every writing milestone with a cupcake. I finish a book; I get a cupcake. I sign a new contract; I get a cupcake. I get a major review (good or bad); I get a cupcake. Cupcakes keep me going. Well, that and I just love to write. I must give a big thank you to all my readers because there would be no milestones and cupcakes without you.
Thank you, Gloria, for the interview!

I wish you many cupcakes in the future.

I love the cupcake idea! Might have to adopt that practice myself :)

I like the cupcake idea, too, but I probably wouldn't be eating many unless I lowered my goals. Then I'd be eating way too many.

One of the things I like about your books, Amanda, is your sense of place. Tomorrow, I'll be mentioning this in my regular Thursday blog.

I admire your discipline, Amanda. I'll have to try the cupcake idea, too.

Penguin, Five-Star and ?Berkley? You have to be busy. I'd be in heaven, but I think hell as well. Five-Star was your first publisher (I think) but how did you get the other contracts?
Congratulations!

Thanks everyone. Cupcakes are the best motivation.

Gloria, thank you so much! I love the setting for all my stories.

E.B.,
After I sold to Five Star, I signed with an agent. She's fantastic. All the deals since I must credit to her.

A sarcastic college librarian is a GREAT idea for a protag. Wish you much success!

I was fortunate enough to win a copy of A Plain Death, which I am enjoying very much. Amanda, your writing has a way of drawing the reader into the situation and keeping him/her involved. Thanks for working so hard to produce so much fine work!