Rain drops hit the windows and splatter into the puddles in the front yard. Piles of crusted and muddy snow and ice start to flatten and liquefy. I’m grateful I don’t have to and couldn’t shovel emerging rivulets flowing towards the street. 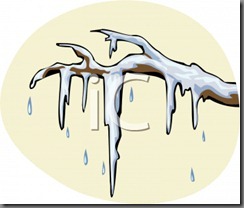 Rain means the air and earth, or at least in the valley where I live, are at last beginning to warm up. Growing strawberries no longer seems wishful thinking so I ordered my strawberry plants. I can almost taste the fresh fruit.

All that water trapped in snow and ice is moving again. I remember a TV ad in which a woman takes a plastic bag out of her freezer, and, unable to see what’s inside the bag, proceeds to pound the bag with a

sledge hammer. Stop trying to identify unnamed frozen objects and buy our freezer labels is the message of the ad.

I guess many of the unidentified frozen objects in the subconscious weren’t named before they were dropped into the dark unknown to be developed at a later date. Attacking them with the equivalent of a sledge hammer doesn’t seem a good idea.

I don’t write memoirs so working on internal conflicts through writing has not been one of my goals. I’m not a particularly introspective person. However, I think the commitment writers make to their work eventually leads to conflicts being tackled through fictional situations and characters. Some writers see conflicts common to most of us and other writers see more personal conflicts.

When I wrote poetry on a regular basis, the compressed use of language and unusual juxtaposition of images led to resolutions, rarely what I planned. After my mother died, a constant stream of images of my mom, of her interacting with family members and with me flowed through my brain. My memory of her was almost entirely pictorial. Once I reached an acceptance of her non-presence, I found the words to describe her and how I felt about her.

So, I wonder if, when we write, we focus on the story within and with the characters we create face conflicts, seek resolution, and come to conclusions that may or may not be what we wanted.

When the urge strikes me, I take out of the fridge everything I’m not using on a regular basis and discard it. That can work with writing and imprints of past events. Who needs a frozen fuzzy mammoth covered in green mold?

Do you feel a certain lightness, a sense of freedom, even if only for a moment, when you finish a piece of writing to your satisfaction?

Personally, I find that inner conflicts are a great source for writing. Writing is a great source of relief. Luckily, I am chucked full of issues. (I have been a psychologist for a very long time.) On a more serious note, I am certain that writing helped and is still helping me survive cancer treatment. Even now I have more bruises and scar tissue than your average junkie.

I know writers whose writing helped them survive the loss of a loved one. I also know writers who avoid psychology like the plague because they don't want their inner conflicts resolved leaving them with nothing to write about. I imagine that's different if you're a trained psychologist.

No matter what I write, no one, including myself, is ever satisfied by it. One word edited here, another there. I'm never satisfied because in the past when I have been thinking well of my writing, I've received a harsh kick of reality. I've heard, though, that even the best writers are never satisfied. As far as personal issues--I never write about them because I'd be writing for myself, not the reader.

If I were ever totally satisfied with something I'd written . . . but I never get all the way there. And I have tons of those woolly green mammoths stacked around my office. Someday I'll get brave and start throwing them out, but I'll have to hire a Dumpster. My trash can runneth over.