Another interview with L.D. Harkrader 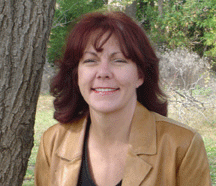 Another Interview with L.D. Harkrader

We had such a good response from your first interview and I learned so much about writing for younger readers that I’m happy to interview you again.

Please remind us about your background.

I have loved books from the minute I first held one in my hands. I loved bedtime stories and convinced my amazingly accommodating parents to read the same books to me over and over until I had memorized the stories and could recite them out loud—even before I knew how to read. My favorite was The Night Before Christmas, and to this day I can recite the entire poem, word for word.

In the third grade, I realized that somebody had to write all those books I loved to read, and decided that some day, one of those somebodies would be me. Now, nearly forty years later, I’m making that third-grade dream come true.

And what’s your background as a writer?

I’ve published nineteen books, including Airball: My Life in Briefs, which won the William Allen White Award for 5th to 8th grades, Nocturne, a young adult fantasy, and Daisy Diaz Shakes Up Camp, a picture book. My next book, The Adventures of Beanboy, about a boy who loves comic books and would love to be a superhero, will be released next fall, and in it, I finally get to combine my two loves, writing and art. I’m drawing the sketches and comic book panels that will be interspersed throughout the story.

And like Kirby Nickel, the main character in Airball, I’m a rabid Kansas Jayhawks basketball fan.

Definitely cool. I am a big fan of Airball, My life in Briefs. I found it a sweet, satisfying and quite entertaining read. Is the book you’re best known for?

Yes, it definitely is right now.

Spoken like a true author. Can you give us a brief summary?

Airball: My Life in Briefs is about Kirby Nickel, a 7th grader who’s convinced that Brett McGrew, the NBA superstar who grew up in his small, basketball-crazed town, is actually his father, and he will do anything, including play basketball in his underwear, to prove it.

That’s the quick version of the plot, but in my heart, Airball is better summed up by something Kirby’s cousin Bragger tells him early in the book: “Can’t be a hero if you’re afraid of looking like a fool.”

I know it was not marketed as a mystery, but isn't Kirby’s trying to solve the

puzzle of who his father is the engine that powers the whole book?

Yes! I’m so glad you said that. I wrote Airball very much as if I were writing a mystery. I knew that it would not be marketed as a mystery, and I was pretty sure I would be the only one in the world who saw it as a mystery, but the book is about Kirby gathering evidence to prove that NBA star Brett McGrew is his father. I was very conscious of planting clues and red herrings and playing fair with my reader. I also wanted to set up the ending so that it would be a surprise, but would also—because of the clues and foreshadowing—seem perfectly right, which is exactly what a mystery writer has to do.

I think you can make the argument that many books that haven’t been marketed as such are, at heart, mysteries.

I agree entirely, but I’m biased. I wrote a short story once about Hamlet as a P.I.

It makes sense to me.

Do you get asked if you have fantasies about young boys in their underwear?

No, only you asked me that. However, I’ve gotten letters from readers saying that reading about Kirby in his underwear has given them the courage to do things they were afraid to do, which is pretty satisfying to me as a writer.

I hope you’re writing a sequel.

When I visit schools, kids tell me the same thing. I would love to write a sequel, but at this point, no sequel is in the works. I don’t want to throw a book out there just for the sake of having a sequel. I first want to come up with a compelling story for Kirby and his life after Airball.

I hope you do there are lots of characters including Kirby’s friends, his coach and his grandmother I would like to know more about.

Thank you. I promise I’ll let you know.

Your book (the one for which you're known :)) reminds me of several things. One, that my son truly believed that Johnny Bench (at the time a catcher for the Cincy Reds) was his brother! A total fabrication, but he convinced his nursery school teacher it was true.

Two, that the world needs a sequel!