An Interview with F. M. Meredith

FMM: Dark Oak is just what the publisher calls all the mysteries Oak Tree publishes. It has nothing to do with my title.

EBD: How did you develop this series? Who is your main character? What’s the series hook?

FMM: I’ll start with the hook. The RBPD series focuses on the town’s police department, the officers and their families. My intent is to show how what goes on with the job affects the families and what’s happening with the family affects the job. There are a lot of on-going characters who make an appearance in most of the books, but each book tends to focus a bit more on one or two characters. The focus character in Angel Lost is Officer Stacey Wilbur who also acts as the department’s vice officer but can’t concentrate on much except her upcoming marriage to Detective Doug Milligan.

When I wrote the first book in the series, Final Respects, I had the same intent, but didn’t plan on writing a series. The more books I wrote the more I fell in love with the characters and wanted to know what was going to happen to them.

EBD: Why did you title your book Angel Lost?

FMM: I can’t really tell you the reason for the title without giving away two huge plot points—but I will say the title has a double meaning.

EBD: Your setting is almost another character, portrayed vividly. Have you lived in a small coastal California town?

FMM: Yes, we lived for over twenty years in Oxnard back when it was a small town (which it is no longer) and that’s the main reason I created the fictional location of Rocky Bluff that is between Santa Barbara and Ventura—but it isn’t Carpinteria.

FMM: Tempe Crabtree is a Native American female resident deputy in a mountain community in the Southern Sierra called Bear Creek. (Bear Creek is similar to the place where I live though I moved it 1000 feet higher in the mountains for better trees and occasional snow.) The Sierra (which means mountain, by the way) is the range which runs down the eastern spine of California. Bear Creek is north and east of Bakersfield and south and east of Fresno in the Central Valley.

EBD: Both series are police procedurals of sorts, but that’s not the only subgenre in which you write. Tell me about the Christian Horror. Is it paranormal?

FMM: I wrote three Christian Horror, which I’d term supernatural rather than paranormal. They are extremely scary but also Christian. Between my series, I wrote a romance with a touch of the supernatural, Lingering Spirit.

EBD: Although Angel Lost is about the Rocky Bluff P.D., there is an element of the paranormal in it. Do all of your books have this element?

FMM: I think this is the first time I’ve had anything you might call paranormal in a RBPD book—but it’s based on something that actually happened in the city of Porterville, which is 17 miles away from my home. There is almost always some kind of Indian mysticism in the Deputy Tempe Crabtree series.

EBD: You have nearly twenty books published. Were they all published by Oak Tree Press? Are your books available in electronic format?

FMM: I think the number is closer to thirty these days. I guess I ought to count them all. I’ve had lots of publishers over the years—a couple of crooks, two that died, one that quit the business, and a couple I chose to leave. Oak Tree Press published the last three in the RBPD series and I’m very happy. Mundania Press publishes the Deputy Tempe Crabtree series. Mundania requires their books to have some sort of supernatural element in them. I’m very happy with them too.

Many of my books are available in electronic format. Final Respects, Fringe Benefits, No Sanctuary, and An Axe to Grind are all RBPD books that are available electronically. Several of the Deputy Tempe Crabtree ones are too, as is Lingering Spirit.

EBD: Your book had few editing errors. How does Oak Tree Press deal with its authors? What is the publishing process like with this publisher?

FMM: You must’ve read the ARC since the regular books are just now leaving the printer—I hope we caught all the errors before it went to press with the cover on it, but I wouldn’t bet on it, since I think there are gremlins who hover over the books and insert errors.

This is my process with Oak Tree. I’m not sure what other authors do. I read every book I write to my writing critique group, which I call my first editor. Next, I rewrite. When I think it’s in the shape I want it, I send it off to a reader who is best at catching consistency errors and typos. Then off it goes to the publisher who goes over it and makes suggestions. It comes back to me as a PDF, which I again go over and send back corrections. It came back to me again for another look-over. Yes, I found more mistakes. Those were fixed and the ARC was printed. We both found more errors in the ARC and hopefully they’ve all been fixed.

I usually buy books at a discount from the publisher since I do a lot of hand selling—book and craft fairs, speaking to writers groups and at libraries and writing conferences. This time I ordered 100, which I should have by the time the blog tour is underway.

EBD: What do you like most about being a writer?


FMM: I’ve written all my life. I wrote for years without being published. Received lots of rejections. What I like most right now is that both my publishers like my work and though I have been asked to make minor changes I’m pretty sure that when I finish a book it will be published. What I like most about being a writer is following along with the lives of these people I’ve created though I don’t always know what direction they might take next. I know them far more intimately than I know my closest relatives and friends—because I actually know how these fictional people think. 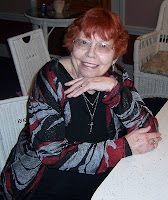 When I read Angel Lost, my favorite parts of the book were F. M. Meredith’s ability to portray her characters, and her use of setting as another character. If you’d like to buy Angel Lost go to Amazon or obtain an autographed copy through her website.
Posted by E. B. Davis at 12:47 AM

Hi Marilyn, I notice that's your name on your website so I won't ask what the F stands for. You've taken a non-traditional route to publishing and you're happy with it. I guess you have more control over the finished product and on promotion. Thank you, Elaine for drawing my attention to a new author. I'll be downloading one of your books on my new e-reader to meet some of your characters.

First, I want to thank you for hosting me today on Writers Who Kill. I loved the interview because the questions were different than the ones I usually get asked.

Hi, Pauline, F stands for my real first name. One day I might have a contest to see if anyone can guess what it is.

I learn something new about Marilyn all the time.

I honestly never knew Marilyn wasn't your first name. Where have I been?

Thanks for hosting Marilyn today. I've read all the Rocky Bluff P.D. books, and have loved them all. I'm so glad I have a hand in helping her promote them. Readers can find a video trailer for this book on YouTube at http://www.youtube.com/watch?v=KE6scV6_rl0

I'm envious, Pauline. I haven't bought an e-reader yet. How I wish I were that progressive--paper is still my medium, until I can't get books in paper anymore.

How you portrayed the setting as character I will study. Thanks for the interview. I'll just call you "teach!"

Really wonderful interview! I have not read the book or series yet, but I do want to!

Very nice interview! Marilyn's books are not only good reads, she brings her characters to life like no other author I've read.

An author, beta-reader, editor, and a host of others can read and re-read a manuscript until their eyes bleed. Yet errors do sometimes slip through. That said, I'm SO glad this was an ARC, Marilyn!

Great interview. Can't wait to download the new book and get into the story!

Thank you, everyone, for stopping by. I really appreciate it.

I really enjoy these interviews and learning more about the authors. I have a review of her book at my site today. I think you can follow my link to read the review.

I read Marilyn's posts, follow her on Facebook. I'm in awe of her energy and spirit. I particularly enjoyed her comment about epublishing on a recent loop. It's tough to be a trailblazer. Good for you, Marilyn.