A Review of Julie Mulhern's Big Shot By E. B. Davis

Ellison and Anarchy Jones are looking forward to a relaxing weekend in the country. Time spent skeet shooting, fishing, and horse-back riding with friends. Hours spent swaying in a shady hammock without friends.

But when Ellison walks into a murder scene, her friends become suspects. And each of them has an excellent motive for murder.

Can Ellison sift through the lies and unmask a killer, or will a weekend away cost her everything she holds dear? 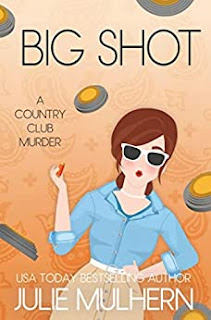 Big Shot is the fifteenth book in Julie Mulhern’s County Club Murder mystery series. She took over its publishing from Henery Press a few years back, and I’m very glad she did since it has continued to be one of my favorites. It is set during the 1970s in Kansas City, MO. The following few paragraphs give readers an overview of the series. Although I reveal victims of the first book, I do not reveal the killer. After fifteen books, the series background is important for the current book’s review.

Main character, Ellison Russell Jones, is in her late 30s with a daughter in high school. Over the course of the series, Ellison runs into corpses, the first one being her husband’s mistress followed by her husband, the philandering and outraged lawyer. Outraged? Ellison’s paintings aren’t supposed to command high prices, intimidatingly high prices rivaling a lawyer’s income. Sexism is a recurrent theme that naturally pops up due to Ellison’s talents that force her outside the given societal parameters, ones that don’t include wives making more money than their husbands.

A romance develops between Ellison and the homicide detective, Anarchy Jones, who investigates the murders of the corpses Ellison discovers and who isn’t easily intimidated. His mother rivals Ellison’s mother in the opposite extreme so their upbringings aren’t really that different. He, too, isn’t doing what his mother wants of him.

Despite her mother’s best efforts, Ellison doesn’t let the confines of her social position define her. The clashes between the women are intensified because, much to Ellison’s dismay, she often finds her mother’s traits within herself. She has a love affair with her Mr. Coffee Machine and owns a dog named Max who causes trouble with the neighbors on top of their vexation with the police vehicles that frequent her house. Although Ellison lives her life as she sees fit, she doesn’t intentionally try to be socially unacceptable, but her best efforts to conform are often thwarted, and she marries Anarchy—not the husband her mother ordered.

Big Shot is like a locked room mystery because it is set at a camp affiliated with her Country Club. Eight couples, including Anarchy and Ellison, spend the weekend at the camp, which was planned by two of the wives. Ellison finds one of the men shot to death. When Anarchy is asked to lead the investigation, Ellison finds the situation socially awkward since they are her friends, putting Anarchy and Ellison into conflict. But when her mother suggests that Anarchy change his career, Ellison realizes that supporting her husband regardless of the social outcome is a position she must take.

The opening scene epitomizes the double entendre of the book title, which is also the title of a song by Billy Joel. I think Ellison’s ability to Skeet shoot may have been in a previous book, but I didn’t know Libba and Ellison were well versed in the equestrian arts, which isn’t surprising given the era and their social standing. Ellison pulls rank surprisingly by pulling out her secret weapon, her mother, to override institutional restraints. Her mother fulfills her assignment and takes no prisoners, as Ellison anticipated.

Ellison’s successful investigation and a snake reinforce Anarchy’s faith in his wife and marriage. With the murderer found, readers wonder if the remaining couples on the suspects’ list will fall one-by-one in upcoming books. Few were true friends anyway. 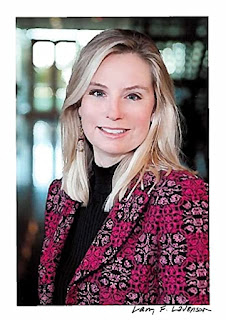 Sounds like a great addition to a fun series.

I love this series. It's so funny.