Or would “Punctuate, People!” be a better way to write it?

It does make a difference.

Lynne Truss produced a book illustrated with cuddly pandas entitled Eats, Shoots and Leaves (Harper Collins, 2009) that turns out to be about the importance of commas, not about the after-feeding activities of murderous pandas.

A surprising number of misstatements surround food, perhaps because many references are presented not as a narration, but as truncated menus and signs.

Outdoor seating on the sidewalk in front of a restaurant: “Tables are for eating customers only.” How many customers do they lose to being eaten?

At the entrance to a library: “No smoking food or beverages permitted.” Smoking food takes a while and produces lots of smoke. It probably would damage the books.  Not sure about smoking beverages.

And the ingredients in a vegetarian salad: Lettuce, tomatoes, red onions, mushrooms, goats, cheese.” The addition of “goats” would remove it from the vegetarian category.

In the October 2010 issue of Tails magazine: "Rachael Ray finds inspiration in cooking her family and her dog." 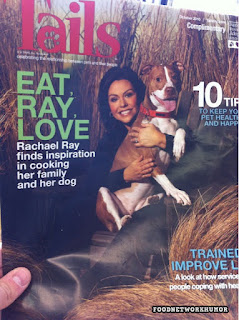 Probably not the publicity she was seeking. 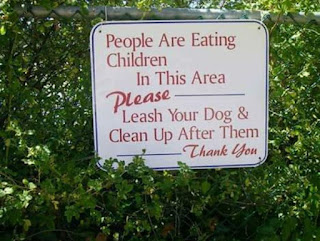 There’s a difference between a picture of a man eating chicken, and a man-eating chicken. One is mundane; the other is scary.

Can you think of a time when punctuation changed the meaning of a passage?

In 2017, a court case was decided by the lack of a comma. Here is the portion of the law under dispute:

Workers and their employer agreed the list of items included canning, processing,preserving, freezing, drying, and marketing. What they did not agree was if the rest of the sentence included one item or two.

The judge recognized that Maine rules for drafting laws do not use the Oxford comma, but in situations like this where the lack of an Oxford comma causes ambiguity, and as the labor law was designed to protect workers, the interpretation favoring workers should prevail.

Here's a URL you can look it up: https://www.cnn.com/2017/03/15/health/oxford-comma-maine-court-case-trnd#
The employer said it included two: (1) packing for shipment, and (2) distribution.

Workers insisted there was only one item remaining: packing for shipment or distribution (shipping and distribution being two things the packing could be preparation for)

The court sided with workers. The judge wrote that had the legislators intended for there to be two items, they could have signified their intent without ambiguity by including an oxford comma to separate the last two items. Since they did not use an oxford comma (intended or otherwise) the law included packing for distribution, but did not include the distribution itself.

Thanks, Jim. I remember that case cost the employer, a dairy, over $5 million in back overtime wages.

Love this one, Kathleen. I always laugh when I see these sorts of signs. How about: Try Our Gluten Free New Owner.

Ah, the importance of the comma! But lately my edits have included removing the comma separating compound sentences and before adverbs like 'too." These days I know less about commas than I once thought i did.

Signs can certainly be fertile ground for misstatements, Judy.

Like everything else with language, punctuation evolves, Marilyn. I find myself eliminate the comma after an introductory word like "So..." etc, especially when I'm writing dialogue. One writer's grammatical error can be another's stylistic choice.

I'm with Marilyn. I thought I knew commas. Now, although most commas and I seem to be strangers, the Oxford comma and I are still good friends. Think of all the grandmas whose lives have been saved by that little squiggle.