An Interview With Laurie Loewenstein

One way I discover new authors is by attending writers’ conferences, where I get to meet authors and hear about their books. For example, I met mystery author Laurie Loewenstein at Bouchercon a few years ago about the time Death of a Rainmaker, the first book in her Dust Bowl Mystery Series, was released. Recently I heard her speak at George Mason University’s Fall for the Book Festival about her newest release, Funeral Train. The Dust Bowl of the 1930s is a period I knew little about, so I was fascinated by Laurie’s talk about what inspired her to set her mystery series during the Depression and the Dust Bowl and pleased that she was willing to tell me more about her series. In her gripping follow-up to the widely acclaimed Dust Bowl Mystery Death of a Rainmaker, Laurie Loewenstein brings 1930s Oklahoma evocatively to life.

Already suffering the privations of the 1930s Dust Bowl, an Oklahoma town is further devastated when a passenger train derails—flooding its hospital with the dead and maimed. Among the seriously wounded is Etha, wife of Sheriff Temple Jennings. Overwhelmed by worry for her, the sheriff must regain his footing to investigate the derailment, which rapidly develops into a case of sabotage.

The following night, a local recluse is murdered. Temple has a hunch that this death is connected to the train wreck. But as he dissects the victim’s life with help from the recuperating and resourceful Etha, he discovers a tangle of records that make a number of townsfolk suspects in the murder.

Temple’s investigations take place against the backdrop of the Great Depression—where bootlegging, petty extortion, courage, and bravado play out in equal measure.    www.amazon.com

Welcome to Writers Who Kill, Laurie.

The Dust Bowl Mystery Series features Sheriff Temple Jennings and his wife, Etha. The sheriff is left dealing with the murder following a devastating train wreck, possibly caused by sabotage, while Etha is coping with grief from the loss of their young son, a severe leg injury caused by the train wreck, and the hardships caused by a crippling economy. How do they have the strength to carry on? 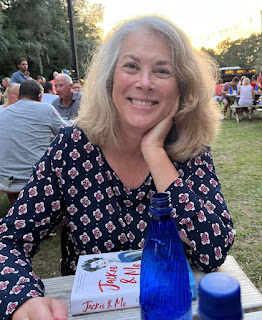 Excellent question. Temple and Etha, as many of the folks living in the Midwest and West at this time, were descended from pioneers. The qualities of endurance, stubbornness, and practicality were needed to survive in those early years of the frontier. Temple and Etha draw on their inheritance during times of crisis.

You set your series in Oklahoma during the Dust Bowl. What exactly was the Dust Bowl, and why this particular setting?

In the 1880s, white settlers began claiming land in the High Plains (Oklahoma, Texas, Kansas, and Colorado), ripping up the prairie grasses that were holding the dirt in place and plowing up the arid soil. Drought and increasing high winds emerged in 1930, so by 1935, more than 850 million tons of topsoil had been carried eastward. The pastures and fields of the High Plains became little more than scoured earth—no longer able to support farm families or livestock. This time and place speaks to me. I can’t explain exactly why. I first studied the Great Depression as an undergraduate and later in graduate school. Reading Timothy Egan’s The Worst Hard Time, a 2006 winner of the National Book Award for Nonfiction, reawakened my fascination with the folks who refused to move on, even when the winds howled, their children got dust pneumonia, and they woke each morning with a coating of dust on their pillow slips.

Funeral Train is a follow-up to your widely acclaimed Death of a Rainmaker. When you wrote the first book, did you plan to write a series?

As a mystery reader myself, I am constantly seeking a new series. Watching how the characters change and develop from book to book is part of the fun. I also enjoy becoming immersed in what becomes a familiar time and place the more I read. I wanted to provide that same experience for my readers.

In the series, Sheriff Jennings faces not only solving a murder but also dealing with running for reelection. Is the position of sheriff always an elected position? 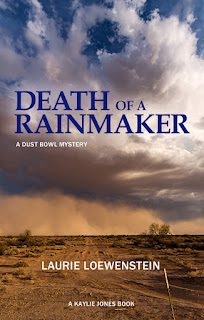 In the majority of counties across the states, the office of sheriff is an elected position.

Some of your characters worked with the Civilian Conservation Corps (CCC). What exactly was the CCC?

One of Franklin Roosevelt’s New Deal projects, the CCC provided jobs for more than three million unemployed men from 1933 to 1942. The typical CCCers got a paycheck, a bed in a bunkhouse, and three square meals a day in exchange for planting trees, building state parks, and constructing fire towers.

The fact that the segregated cars on the train were made of wood and not steel, accounting for more deaths in the wreck, was shocking. Did you set out to raise racial issues and injustices in your book?

Not necessarily, but as I researched train derailments of that era in preparation to write, the inferiority of the “colored” cars was cited as a cause of death more than once. Racial inequities also play a role in Unmentionables, my stand-alone novel. I believe race inequity is a critical issue in our country. As a historical writer, I feel obligated to do my best to portray what was actually going on in a particular time and place.

Your first book, Unmentionables, is the story of Marian Elliot Adams and her campaign for women to adopt sensible undergarments. What inspired you to write about undergarments and changes in American culture? 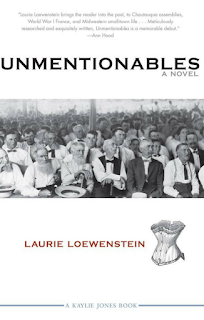 Browsing the library stacks one afternoon, I pulled out a reference book on women’s dress reform advocates of the early 1900s. It mentioned Nina Wilcox Putnam, an author and humorist who contracted tuberculosis as a young woman. She claimed she cured herself by throwing away her corset and sleeping in a tent on the roof of a tenement building for two years. Putnam had an outsized personality and was known for, among other things, striding around Greenwich Village in flowing caftans in Turkish sandals. I was enchanted and used her as the basis for my novel.

Reviewers have commented on how you successfully drew them into different time periods. What prompted you to write historical fiction?

I convinced my parents to take our first-ever family vacation in Colonial Williamsburg in the 1960s. That was the starting point of my fascination for all things historical.

Did your work as a reporter and obituary writer influence your decision to write about murder?

Probably not. I’ve had a preoccupation with the scary and creepy since first discovering the monster magazines that flooded drugstore racks in the 1960s.

Do you read your reviews?

I read those I can learn from—that help me improve my writing on the next go-around.

One reviewer said of your writing: “It’s a sad day that I've burned through everything she’s written.  I hope she is a fast writer.” Are you a fast writer? When can readers expect another book from you?

I am a slow writer. I average about four years between books. I hope to speed that up a bit, but I’m not necessarily hopeful.

What is the most valuable thing you’ve learned since you began writing?

That is a tough question. I try to learn something new whenever I read someone else’s book or write one of my own. I don’t think I’m ready to answer this. Ask me again in twenty years.

Thank you, Laurie. I hope we see another book soon.

For more information about Laurie Loewenstein and her books, go to www.laurieloewenstein.com

I’m very much reminded of Steinbeck’s The Grapes of Wrath. The dustbowl 30s were such a powerful era. Looking forward to reading Funeral Train ----and I have to check out Unmentionables! An intriguing topic.

Adding your books to my TBR list. Unmentionables relates to my family history. Dr. Harriet Austin, inventor of "The American Costume" was in business Dr. James Caleb Jackson (my great-great-great grandfather). You may have run across them during your research phase. Here's the wiki article on Austin

Thanks, Laurie, for visiting us at Writers Who Kill. It's a delight to find a mystery series that teaches us about a part of American history.

Welcome to WWK, Laurie. Your series sounds right up my alley. Thanks for the interview and introduction to another intriguing writer, Grace!

Thanks so very much, Grace, for the invitation an terrific qustions. I'm in great company with these writers. Thanks, too, to those who commented-- I appreciate your support and interest. I had not had heard about Dr. Harriet Austin, Jim. I can't wait to research her. I based my Unmentionables protagonist on Nina Wilcox Putnam, a founder of the Rational Dress Society, among a host of other activities. Here is a link that mentions Nina: https://www.looking-for-mabel-normand.com/visitbysuffragettes.htm

I love mysteries set in other times and places! One for the TBR list.