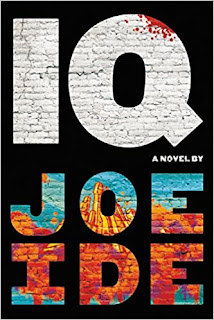 I met Joe Ide’s brilliant character, Isaiah Quintabe, in the first of his six-book series, IQ. Isaiah, like his creator, is a product of South-Central Los Angeles. Ide weaves Isaiah’s story with dual timelines and multiple points of view. His screenwriting background is evident with his seamless time and point of view transitions.

Isaiah is an orphaned seventeen-year-old when his older brother, Marcus, is killed in a hit and run accident. He’s determined to support himself and discover who killed his brother. Isaiah rents his spare room to Dodson, a high school friend, who helps pay the rent by luring Isaiah into various business ventures, legal and illegal. But no guns. Isaiah has standards. Isaiah assumes a Robin Hood role when he rescues a young woman and also provides financial and emotional support to a young teenager crippled in a gun fight.

Isaiah is a finder and a truth-seeker, assisting his neighbors with problems like missing wedding gifts as well as more lucrative gigs.

The behavior and training of pit bulls is a major part of the book. Isaiah consults knowledgeable breeders who identify a terrifying specimen, Goliath, “a pit bull on steroids” bred, at one time, from a Presa Canario, a breed of guard and fighting dogs. Goliath is a hundred-pound-plus trained killer. Isaiah respects and fears the dog, but is prepared to deal with him.

As a renovation enthusiast, and because I’m in the middle of a “beginning pages” class, I delighted in Ide’s opening paragraph:

“Isaiah’s crib looked like every other house on the block except the lawn was cut even, the paint was fresh, and the entrance was a little unusual. The security screen was made from the same heavy-duty mesh they used to cage in crackheads and bank robbers at the Long Beach police station. The front door was covered with a thin walnut veneer but underneath was a twenty-gauge steel core set in a cold steel frame with a pick-proof, bump-proof, drill-proof Medeco Double Cylinder High Security Maxum Deadbolt. You’d need some serious power tools to get past all that and even if you did there was no telling what you’d be into. Word was, the place was booby-trapped. A cherry eight-year-old Audi S4 was parked in the driveway. It was a small, plain car in dark gray with a big V8 and sports suspension. The neighborhood kids were always yelling at Isaiah to put some rims on that whip.” (p.7)

I'll leave it to others to determine if I've created likable and unique characters, but I do love Joe Ide and his books. Thank you for the review.

Readers seem to think Geneva, the ghost in my Haunted Yarn Shop mysteries, is likeable. I'm fond of her, too. She copes pretty well considering her circumstances - the major one being that she's dead.

Thanks for the review. I always pick up good reading suggestions from you.

Thanks for the review of a unique series.

I used to live in south Chicago, and the opening sounds like a west-coast version of that neighborhood. Complete with the "safe house," which was never a "stash house" since it would be too obvious.

Kait, Molly, and Kathleen, thanks for your comments.