Behind the Scenes of a Double Release by Jennifer J. Chow

Originally, the two landed on the same release day, but the publication dates have since shifted. I’m actually glad for the change. (It’s kind of like when I thought I’d be theoretically happier raising twins instead of a single baby—before realizing how much work that would take.)

My two new book babies have opposite literary personalities. My contribution to Midnight Hour is a short story while Mimi Lee Cracks the Code is a full-length cozy mystery. “Midnight Escapade” is also grittier; Kirkus Reviews says: "Jennifer Chow follows two old high school friends whose decision to meet in an escape room has unexpected consequences."

Mimi Lee Cracks the Code is in the same vein as my previous light-hearted Sassy Cat Mysteries, except this time it features a romantic getaway to Catalina Island gone wrong. Publishers Weekly says, “Chow offers original characters, clever banter, and a laid-back California vibe. This is perfect for lovers of crime-solving animal cozies.” 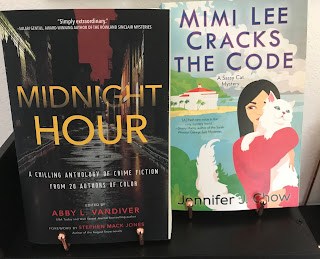 (*The Mysteries for the Modern Reader giveaway is happening now until November 19.)

Certain things remained the same. Both books got trade reviews, with Midnight Hour earning a starred review from Publishers Weekly. They also both made it on must-read lists: Midnight Hour on Black Fiction Addiction, and Mimi Lee Cracks the Code on POPSUGAR.

To keep track of two releases, I created a master calendar. Next to each activity or event, I make sure to specify which book I’ll be focusing on. I have updated bios on hand: mine is on my computer while the anthology contributors have listed theirs on a shared document. I’m also planning on marking passages in advance for each book, so I’ll be prepared for a reading.

Admittedly, all of this can be stressful. That’s why I make myself:

·         Get a treat: Celebrate completing an item on my to-do list, whether that’s a reward of a mug of steaming tea or a slice of cinnamon sugar pumpkin bread

How do you balance multiple pressing tasks?

Congratulations, Jennifer on your dual releases. To answer your question, when the pressure gets on, I buckled down and become ornery if anyone gets in my way.

Ha--that's funny. I'm sure I get super grumpy, too.

Hi Jen, congratulations on your double release!
I like your focus on the short term, one week at a time, otherwise it all gets too overwhelming!
And the emphasis on treats. I've treated myself with a trip to my favorite ice cream shop for every Meri Allen book :)

Congratulations, Jen! It sounds like you have the logistical skills of a general.

When I have a lot going on, I hunker down and get it done. Sometimes with more grace than others. I am taking a page from your self-care suggestions. They can make all the difference.

I cook ahead and hunker down with daily and weekly goals.

I get dizzy just thinking about it. I hope it all works out well and you continue to have success in your writing career.

Shari: Thank you! And the ice cream is considered research for you, right?

Kait: Yes on the self-care!

KM: Thanks so much! I'm getting dizzy with schedules myself.

Molly: Thank you! So kind of you.