“Not toxic friends,” I said.

Cynthia Kuhn, How to Book a Murder, Kindle 1358

In a heartbeat, Emma and her aunt Nora, a famous mystery writer, become suspects. Emma is sure the party’s over for Starlit events, until celebrated author Calliope Nightfall, whose gothic sensibilities are intrigued by the circumstances, implores the bookseller to create a Poe-themed launch event for her latest tome. Throwing a bash to die for while searching for additional clues is already enough to drive Emma stark raven mad, but another shocking crime soon reveals that Silvercrest has not yet reached the final chapter of the puzzling case.

Someone in this charming artistic community has murder on the mind, and if Emma cannot outwit the killer, she and her beloved aunt will land behind bars, to walk free nevermore. 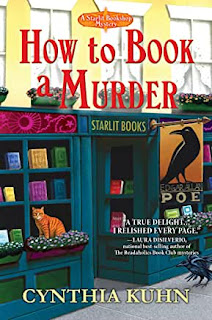 The fate of their late parents’ Starlit Bookshop is in the hands of sisters Lucy and Emma Starrs. Main character, Emma, the younger sister, decides to increase customers by planning store events. Unfortunately, the one off-venue event she accepts to help gain recommendations ends in murder. To get off the suspect list, Emma must find out whodunit.

Due to the murder victim’s complex life and finances, the case isn’t easy to solve. He was married to Emma’s high school nemesis, served as the chair of Aunt Nora’s Silvercrest College English department, and involved with several business deals that could have provided motive for his demise.

How to Book a Murder, the first book in Cynthia Kuhn’s Starlit Bookshop mystery series debuts on December 7. This is Cynthia’s second series. Her first, A Lila Maclean Academic Mystery series, is now on Kindle Unlimited!

There’s a river, mountain views and snow by Halloween. Where is Silvercrest in Colorado?

Thank you so much for having me on Writers Who Kill! We have had snow by Halloween in the Denver metropolitan area, which always seems a little surreal! The imaginary Silvercrest would be southwest of Denver, right at the foot of the mountains next to a river (that I also made up). The river’s proximity is inspired by Morrison and Estes Park, both of which have water running alongside the main street.

When high school nemesis, Tabitha, comes into the bookstore, Emma immediately feels as if she needs to prove something to the woman. Do we all feel like that from our high school detractors? Why does anyone go to high school reunions? People change.

Good questions. It probably could go in a variety of ways, depending on how we feel about revisiting people or places. But Tabitha has been positively awful to Emma (and others) in the past, so she prompts a strong reaction.

Even though Emma dislikes Tabitha, Emma makes a deal to oversee the murder mystery dinner when its planner vamooses. Why does she do that?

Starlit Books is floundering. They need the money and Emma has event planning experience from her doctoral program years, so she impulsively offers to take the job.

Why is their red tabby named Anne Shirley?

The sisters are fans of L.M. Montgomery, who was their mother’s favorite author. Backstory secret: their own names are also inspired by her work.

Although Emma is the younger sister, she takes on the challenge of planning events and marketing the bookstore to save it from bankruptcy. Why hasn’t Lucy done more to save the store?

Lucy was happy to take on the management elements but found herself overwhelmed, so she had to let the marketing and special events go. Her parents used to divide the same work up when they were in charge, too, so it does work better as a two-person job.

After finishing her PhD, Emma decided to return to Silvercrest to help save the store. Why did she apply for a tenure-track teaching position if she knew she couldn’t take it?

Emma didn’t know when she applied for the tenure-track position months earlier—it’s quite a long process—that Starlit Books was in trouble. When she found out, she immediately decided not to accept the teaching offer and went home to help instead.

What did Emma do for her dissertation?

Emma wrote a novel with a critical preface examining the works of women mystery writers of the Golden Age as a historical precedent. It was the kind of dissertation that creative writers wrote at the school I attended. (I was in the literary studies program there, so I wasn’t able to choose that option, but I would have loved to!)

Aunt Nora, Lucy, and Emma all like purple. What draws them to that color?

I honestly didn’t notice that they all did—how interesting! But I don’t blame them. It’s compelling to me too.

Calliope believes that bestowing a new name on someone is giving them a gift. It’s a little unusual, but so is Calliope, whom I adored writing. Her personality just kept getting bigger and bigger.

Is Lucy a talented artist? Calliope loves Lucy’s sketch of her.

Lucy is very talented and could certainly go further with her artistic abilities if she wanted to do so.

It would likely depend on the writing situation and her purpose.

What is a “terminal degree?”

A terminal degree is the highest degree awarded and can serve as an eligibility requirement for certain jobs (PhD, EdD, MFA, etc.).

When Tabitha publicly accuses Emma and Aunt Nora of her husband’s murder, why don’t they get a lawyer and slap her with a lawsuit to shut her up? Tabitha’s accusations could hurt the store’s business.

It never even occurs to them. They’re not the litigious type, for one thing, but also they think her behavior is, as always, simply terrible. In other words, it’s Tabitha being Tabitha.

What is “family language?”

Certain phrases that are learned or used within families—for example, Emma notices that two related characters use the same phrasing, which is attributed to their father.

Why does Emma have mixed feelings about joining Jake’s West Side writers’ group?

On the one hand, she and Jake have been in competition forever. There is definitely some baggage there. On the other hand, she wants to finalize her novel and thinks this group could help her do that.

When Emma is stressed with too many things on her schedule simultaneously, she focuses on the present, here and now. Is that her way of coping?

Absolutely! It’s the same principle as “one day at a time.”

Is a phone recorder actually the video function on the phone? In Colorado, is it legal to record a conversation if the person recording is part of the conversation?

Some states, like Colorado, have one-party consent, which may come from the person who is recording. And no, it’s not the video but the voice memo app.

Who is Phryne Fisher?

She’s a character in a series of detective novels by Kerry Greenwood that have been adapted into the TV series Miss Fisher’s Murder Mysteries (and film). The 1920s-era costumes are so gorgeous that they’ve been featured in an exhibition.

What’s next for Emma and the Starlit Bookshop?

In the second book of the series, there is murder and mayhem…at a library gala!

Cynthia Kuhn is an English professor and author of the Lila Maclean Academic Mysteries and Starlit Bookshop Mysteries. Her books have been Agatha Award and William F. Deeck-Malice Domestic Grant winners and were shortlisted for the Daphne du Maurier Award and Lefty Awards. She currently serves on the national board of Sisters in Crime and is a member of Mystery Writers of America, International Thriller Writers, Rocky Mountain Fiction Writers and the multi-author blog, Chicks on the Case. Originally from upstate New York, she lives with her family in Colorado.

How to Book a Murder: https://bit.ly/3hvzCgw

I cannot wait for this new series, Cynthia! Everything about it sounds just right.

This series sounds terrific! Congratulations, Cynthia, I wish you every success!

I KNOW I am going to enjoy this series..... just received a print copy :).

Looking forward to snuggling up with a warm afghan, a glass of wine and some fun reading on a chilly afternoon soon.

Thank you so much for having me on the blog today, Writers Who Kill, and special thanks to EB for her interview magic.

Much appreciation for the kind comments, Molly, Shari, Debra, and KM! I hope you enjoy if you give it a try. :)

Thanks for the interview, Cynthia! Good luck with the series--a fun read, which I'm sure will be a winner. Come back to WWK soon!