Creating a World of Place Names by Susan Van Kirk

One of my favorite pleasures in writing a series about a small Illinois town is creating an imaginary world with interesting place names and businesses. The Endurance mysteries are so named because they all take place in the small town of Endurance [population 15,000.] This pioneer town was founded on July 30, 1836, and I chose “Endurance” because I wanted to describe the hardy Presbyterian stock who traveled through harrowing hazards and difficult terrain, enduring harsh winters and tough beginnings to found a town and college in the wilderness of the new state of Illinois. 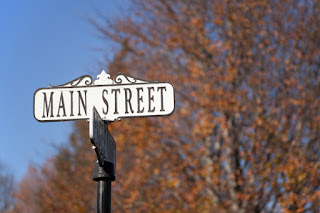 I also chose this name because it describes the strong protagonist of my novel, Grace Kimball, and the other strong female characters who support each other. Grace survived two terrible experiences that have only made her stronger. A fire in college killed her roommates, burning a scar on her hand and her heart, but she survived. Her husband died unexpectedly in his thirties of a heart attack, leaving her to raise three children alone. Her friends, TJ Sweeney, Jill Cunningham, and Deb O’Hara are always there to help, and when her former sister-in-law, Lettie Kimball, is laid up with a severe sprained ankle, a whole army of people come to the house to cook and clean, helping both Grace and Lettie. Endurance is that kind of place.

The town also has institutions that arise from its name. I created the Endurance Historical Society, where Deb volunteers; Endurance High School, where Grace taught; the Endurance Public Library, Endurance College, the First National Bank of Endurance, and the town’s newspaper, the Endurance Register. Not difficult to remember!

Next, I populated the town with various stores and places the inhabitants know. I often chose the names 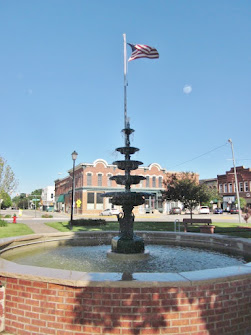 by their sounds. We have Patsy’s Pub, Binkle’s Shoe Store, the Little People’s Day Care Center, Gimble’s Paint and Wallpaper Store, the Clip & Curl hair salon, and The Depot restaurant (named because Endurance’s history includes the railroad). Other places people simply know because they’re familiar landmarks. When Grace receives directions to “the Kessler place” in the country, they simply tell her to turn right at Miller’s Corner. I did have fun with the last stops for most people: the Homestretch Funeral Home and Shady Meadows Cemetery, most recently the location of a Wiccan funeral in The Witch’s Child.

While Endurance is a small town, nearby is the larger town of Woodbury where the Endurance inhabitants go for additional shopping and services they can’t find in Endurance. When a terrible fire occurs in Three May Keep a Secret, eight different towns, including Woodbury, send fire trucks and men to help fight the fire. They have reciprocal agreements as far away as Charlotte and Lexington, towns named by early settlers who traveled from the East Coast.


In Marry in Haste, I had such fun imagining the town of Endurance in 1893. This mystery has a double plot in the present day and in the late 1800s. Some 21st century characters had ancestors in the 19th century plot. I mapped out the town with its public square surrounded by dry goods stores, the telephone office, the library and reading room, hardware stores, livery stables, and gunsmiths. “For the ladies” there were milliners, dressmakers, and notions stores. On the edges of town were the flouring mills, soap and candle works, creamery, pottery, steam and gas fitters, coal and lumber yard, grain elevator and coal dealer, brickyard, and the railroad depot. Of course, professional offices dotted the square also, as did banks, printers, and the courthouse, jail, and sheriff’s office. Then there is Mercy Street, a street stretching south of the square where no decent lady should be seen because it was filled with bars and brothels. The Second National Bank of Endurance appears in both the late 1800s and in the present day in the same location.

Creating an entire town as the setting of a mystery is great fun. However, keeping the location of all these places straight over the course of the series is the price you pay for so much detail.

And who says you can't have fun while making stuff up.

I use real places and businesses when I can get away with it, but if something bad happens or the bad guys own a business, those I make up.

The difference is mine are transitory (the bad guys tend not to make it to other books, with the exception of one particular bad guy who will be there forever, maybe). Your names Endure!

Ha, ha. Yes, I know, Jim, about locations and bad happenings. I, too, have tried to disguise places enough to pass. But you’re right about fun.

This is definitely a fun part of writing! Being able to create a town is pretty wonderful, isn't it? Naming your town Endurance was brilliant, since it reflects the town, people and Grace so well.
One of my author fantasies is having a map of "Mystic Bay" or "Penniman" printed inside the books. I've made sketches of the town and floor plans of buildings to help me keep things straight, and as a reader I love seeing maps in books. Perhaps you can convince your publisher to add one to your books.

Imaginary towns take a lot of work, but they are fun to create. Sounds like you've done a great job, And I second Shari's love of maps in books.

Endurance sounds like a town I need to visit! I'm looking forward to starting your series.

A great subject. I always create a locale for my series—imaginary with elements based on towns and places I've visited.

Shari and Kathleen, I’ve always wanted a map inside one of my mysteries. Alas, no publishers have been interested. I’ll keep trying.

Thanks, Korina and Marilyn!

You do a fine job of keeping the places and names straight. It's because the stories and characters live in your heart.

You've put a lot of personality into Endurance, Susan, and a lot of love. Really nice job.

I like to envision a town in the nineteenth century and how it evolves to present day. I love your shop names.

Maybe you could draw/have a map drawn for your website?

Thanks, Molly. You do the same for your Scottish highlands.
That’s an interesting idea, Margaret. I will check with my web person about map possibilities.

Thanks for sharing about how you created Endurance, Susan! What an amazing job and great name selection!