A Journey Through Short Classic Crime Fiction by KM Rockwood

I love short stories, and I often read one at night before I go to sleep. I’m especially fond of mystery stories, so I’m always on the lookout for anthologies and collections that I haven’t seen before.

Recently I found a treasure, an anthology that is not only chock full of a month’s worth of entertaining stories, but also an educational journey through the history of the genre, illustrated with superb examples.

The name on the spine of the book caught my eye. Donald E. Westlake, one of my favorite crime novel authors. He passed away in 2008, but not before producing over one hundred books under several names, including Richard Stark.

Was this a collection of his short stories I had somehow missed over the years? 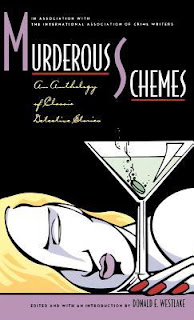 It turned out to be an even more exciting find titled Murderous Schemes: An Anthology of Classic Detective Stories.[1]

With the able assistance of J. Madison Davis, Westlake had selected eight conventions of crime short stories. He wrote a brief history of each of the conventions and selected four stories to illustrate his short essays. He also included commentary on each author and story included in the book.

A glance at the table of contents showed such masters as Dorothy Sayers, Rex Stout and Agatha Christie.

Some of the stories are old favorites of mine, but many are ones I’ve somehow failed to read previously. Familiar characters such as Father Brown, Nero Wolfe and Raffles abound.

Westlake gives us stories using classic techniques, like “locked room” murders where the victim is found in a sealed room with no apparent way for the killer to have escaped. Also included are the “only one among you,” when a group of people are isolated (classic technique is a group of guests stranded in a country home by a snow storm) and the murderer must be one of them.

From “armchair detective” to “hoist with their own petard” tales, the book leads us through a fascinating reading of the history and development of crime short stories.

If you’re not familiar with this book (and I suspect many a student of mystery writing has encountered it, in a classroom or out) it’s well worth a read.

How have I missed this one?

Interesting collection, which I had also not heard of. Thanks for bringing it to my attention.

I'm not sure why I have never encountered this informative anthology before, but it was a pleasant surprise to stumble upon it.

I almost ordered this one a couple of years ago, but realized I had most of the stories in other places... However, hearing about the organization and focus, I might need to revisit and pick up anyway!

Interesting, Kathleen! One more for my TBR pile.

This sounds like a great collection. Thanks for sharing about it! (Confession: I had to look up "petard" to figure out what it meant.)