One Route to Authorhood 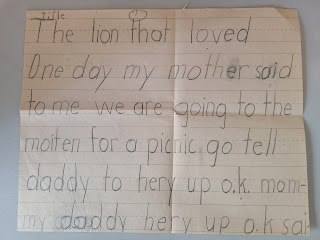 My road to becoming a published author has been rather circuitous. Recently my octogenarian parents handed over our childhood memory boxes, trophies (from the days when not EVERYONE got a trophy, but still not worthy of display), report cards, band medals and innumerable faded photos of BFFs long forgotten (is that what the second ‘F’ stands for?). Toward the bottom of the box, I found a couple of stories I’d written in First Grade, on that landscape paper with the triple lines. Does that paper still exist? In my childish print were childish stories of friendly lions and Laura the Ladybug. Though I recall none of it, apparently my writing gene activated in grade school, then took a long hiatus, reigniting only five years ago when, after writing an introductory textbook of anesthesia with my mentor, he suggested we write a novel together. Unfortunately, he fell ill and passed away before we made much progress, but those first chapters (which were awful by the way), sparked a fascination in me. I’d read widely, but never considered the craft involved. Even major issues like POV had never crossed my mind. As always, when faced with a challenge, I dove in head-first, beginning with research.
I read craft books on writing, soon discovering an entire world and breadth/depth of knowledge so far from the medical research articles I’d been invested in for two decades that I became enamored. After my first writing conference, I fell in love with the supportive character of writers, unlike the more competitive nature of medical conference attendees. And so I learned, and read, and wrote, and re-wrote, and pitched, and reeled from innumerable rejections, and bounced back with the help of amazing writer-friends, and finally had some short stories published, and received my first writing-related paycheck ($3), and volunteered to moderate a medical panel at Bouchercon, where I met an amazing fellow physician/author who invited me to submit my manuscript to her publishing company and here we are, a year later, and my debut comes out in March.

Many hurdles lie ahead, finding an agent being foremost. Oh, and navigating my first book launch while being a practicing physician in a pandemic. And not failing the main characters of my first novel, Fatal Intent, in their sequel. I’m told the only thing harder than writing the first novel, is getting the second published. Wish me luck!

What hurdles have you cleared so far? What’s next?

Tammy Euliano’s writing is inspired by her day job as a physician, researcher and educator at the University of Florida. Her short fiction has been recognized by Glimmer Train, Bards & Sages, Flash Fiction Magazine, and others. Her debut novel, a medical thriller entitled “Fatal Intent,” will be published by Oceanview March 2, 2021. You can sign up for her newsletter and find more information at https://www.teuliano.com.

What's next for me is I am working on a spinoff from my Seamus McCree series: rewriting book 1 to reflect my editor’s comments and 40% through the first draft of book 2.

Congratulations on your success and thank you for teaching the Guppies craft class. It was an eyeopener.

Hurdles are what life is all about. I have been published with a small press. Took a three-year break from writing during which I was in the process of plotting, planning, and writing a new series. First book done, second underway! Next hurdle--in addition to finishing book two—the amazing agent search. Never a dull moment.

Good luck with book two. I’m betting you rock it.

You're stellar! Congratulations. Sometimes it feels like every day, every sentence, every word is a hurdle. I have a hurdle race going on right now, though, with three deadlines looming -
an outline due this week for a book due in September, a sample chapter due mid-month for a book due in January, and a book due mid-April. Hurdling shoes on . . . and . . . go!

Impressed with your story. For me, next is revising and submitting Five Belles Too Many, the 5th book in the Sarah Blair series and working on a new idea that I have.

Congratulations, Tammy, on the upcoming publication of your first book. With all you have going on in your life, it's amazing what you've been able to accomplish.

Welcome, Tammy. It's wonderful you have the evidence of your early interest in writing. Mine no longer exist, but I took an elective of creating writing my freshman year of college and enjoyed it. I can't wait to read your book.

Congratulations, Tammy! And good luck with your debut launch! Savor every moment.

The hurdles are many and varied and keep coming, so just keep writing and plunging ahead!

Congrats on your upcoming release!