Novels to Novellas: The Long and Short of It by Susan Van Kirk

Several years ago, after writing my first novel about the small town of Endurance, I did something very uncharacteristic. I wrote a novella and published it only as an e-book. I called it The Locket: From the Casebook of TJ Sweeney. At first, I wasn’t sure how I’d like writing something much shorter than a novel, but later I decided I enjoyed the experience immensely. It was certainly a change from writing novels. It fit between my first and second Endurance books. 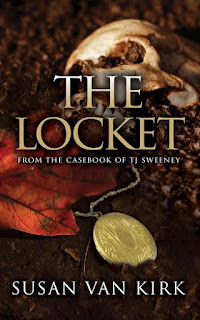 The Locket afforded me three advantages compared to the Endurance novels I’d written. First, I was able to expand the character of my detective, TJ Sweeney, by writing her story instead of Grace Kimball’s. Grace, the protagonist in my novels, put in a brief appearance as a minor character. Second, I mixed up the tone from cozy mystery novel to a slightly darker police procedural. Finally, I made it more compact, an 82-page mystery for readers who preferred a shorter reading experience.

I made several changes in my thinking and decision-making when I switched from writing novels to writing a novella.

Length was the most obvious consideration. My cozy mysteries ran anywhere from 71,000 to 82,000 words. My research dictated a novella should be 20,000 to 40,000 words. The Locket ended at 25,000 words, which translated into 82 pages of content. It was readable in one or two sittings, the perfect length of an afternoon reading break or a commute to or from work on a train. This, of course, affected other decisions.

A novella couldn’t have numerous subplots. In fact, I wrote TJ’s story with one main plot. Period. But it had to allow for quite a few complications. I chose a cold case from the 1940s which emerged when human bones and a skull were found during a building foundation dig. Once Detective Sweeney determined this was a murder, she had to figure out the identity of the victim and what happened to her. How could she identify this murder victim who died long before DNA databases existed? Or missing-person databases? Who was the killer? Why? The twists, turns, and dead ends pushed the plot more quickly compared to that of a novel. The time difference alone—1940 to today—created many possibilities for quick plot twists based on the changes in investigative technology.

Choices about character and viewpoint were also differences I had to navigate. No longer did I have the luxury of several major characters and a supporting cast of minor characters. A novella generally had one or two main characters, and the supporting cast members had to be few and have a darn good reason to be in an 82-page plot. I discovered that rarely did novellas have more than one viewpoint while a novel might have several. Again, it was condense, condense, condense.

The conflict in a novella had to be recognizable early and then continue as the focus of the plot. I didn’t have the luxury of side problems or minor conflicts. The pace of the conflict had to be fast, so complications occurred very quickly. The number of complications determined how long the novella would be. In The Locket, the investigation of the cold case was primary, but TJ Sweeney’s strong identification with the victim provided a roller coaster to complicate the plot and further develop my detective’s character and backstory.

Revision was another consideration when changing from novels to novellas. Unlike the luxurious, rambling pace of a novel, a novella had to be streamlined. I had to be merciless when it came to cutting unnecessary words and too much description. And I was.

What resulted was The Locket: From the Casebook of TJ Sweeney. It was a delightful ride after plodding through an 80,000-word novel. This is the short summary.

The Big Band Era—Dancing on the Rooftop—Romance in the Air—And Murder in the Shadows. After solving a double homicide in the hot Midwest summer, TJ Sweeney isn’t given long to rest. A construction crew has found human bones while digging a building foundation on the outskirts of Endurance. Sweeney’s investigation soon concludes this was a murder victim, but from many decades earlier. Trying to identify the remains and put a name to the killer takes the detective through a maze of dead ends and openings, twists and turns. And then it becomes personal…

Now I need to read The Locket!

Excellent and concise comparison. Writing shorter is so hard.

My general preference is to write novels, but I have thoroughly enjoyed writing the two novellas that are part of the Seamus McCree series.

Looking forward to your novellas!

I love writing novellas! Early in my romance-writing career, I wrote several very short (as few as 15K words) novellas for Harlequin. It wasn't easy to write a convincing love story in so few words, but it was fun and challenging. Your advice is spot on. The writing must be tighter, the characters fewer, and there should be one plot -- although I managed to slip in one subplot a couple of times. I still write at least one novella a year, but now I allow myself to go to about 30K words.

I also love reading novellas. Sometimes I'm impatient for a quick resolution, and a novella delivers that. I downloaded The Locket and hope to relax with it tonight. :)

Thanks, Kait. If I ever get some time between writing novels, I will get back to novellas.

Hi, Jim, and I enjoyed reading your novellas.

Thanks, Barbara. Your plan sounds like a good one. Maybe I'll have to rethink my schedule and slip a novella in between novels. Hmmm. Hope you enjoy my detective.

Hi Susan, Okay, now I'm torn. I like your novels too much to want you to take time off between them!

I cut my writing teeth on short stories for Woman's World-only 800 words. Boy, does that determine what is important. I still prefer to write short, mostly 17,000 words.

Oh, my gosh. 800 words! I don't know how you did that. I noticed, when I was teaching, that everyone liked a particular grade level. You'd never get me to teach junior high or middle school, but some of my more saintly friends loved it. So I guess it's that way about writing too. You find your niche. I still think I'll write another novella or two. 17,000 words is really a tough test too.

Kait, Thank you. Working on another novel now. Susan

There's room for fiction in all lengths! I especially enjoy meeting old favorites from novels in briefer works.