“THE END” is the Beginning 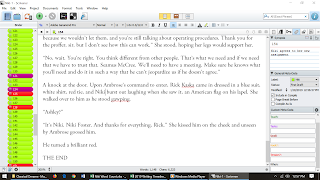 Last Friday I typed “THE END” to the first draft of the manuscript I’ve worked on for the last three months. It’s a domestic thriller and its 104,201 words took longer than I expected for a variety of personal/family reasons.

Getting to the point where one can legitimately type “THE END” provides physical proof that the first step in producing a marketable novel is complete. It’s a step many wannabe writers never achieve and always a reason for celebration.

For me there is another reason to celebrate. By the time I typed THE END, I had finally figured out who the bad guy(s) is/are for this story. [See this 2018-11-04 WWK Blog in which I discuss my approach to determining the villain(s)] Once again, I didn’t figure it out until close to the end. This time was worse than most. I finished the manuscript on a Friday afternoon, and this is where I left it Thursday:

Niki opened the door slowly, standing well back from it in case someone inside had a gun or tried to charge her. She protected her gun hand, holding it close to her body.

She sensed more that heard a movement and assumed a shooting position, training her pistol into the void. “Come out with your hands up so I can see them.”

“That won’t be necessary,” a voice from behind her spoke. “Lower the gun to waist height and drop it. You just couldn’t leave it alone, could you?”

I read that passage to Jan before dinner. She asked, “Do you know who’s saying those words?” I replied that I thought so, but you never knew what might change overnight. The next day I found the last 2,105 words to complete the story and knew for sure the mind behind the mayhem.

My celebration of finishing the first draft was brief; I know typing “THE END” is just the beginning. My first drafts are an unholy mess: They include subplots that no longer make sense. They rarely include enough setting. Four of the five senses are under-represented. Some subplots must be expanded. I have transitions to add, many to shorten. Word choices need much work. Although I probably have the right number of commas, they need to find their proper places in sentences.

My second draft will fix most of the story issues. Later drafts improve the writing. I’ll use as many drafts as it takes to get it right. But the first thing that needs to happen with this WIP is rest. The worker bees under the surface of my conscious will keep thinking on this novel even while I turn my attention to polishing the final draft of False Bottom (Seamus McCree #6) I expect the bees to unearth a few gems; I’ll include them in my notes of things to change in the next draft. Sometimes after reflection, I’ll reject those suggestions. Mostly they are good, and I’m glad for them.

Readers do you enjoy knowing how the book-sausage is made? Authors, what’s your process?
AN UPDATE: This post was written almost two years ago, so you might be curious what has happened in the meantime with this manuscript. Draft two straightened out the storylines, more or less. Draft four went to my editor last fall, and I am working on draft five to reflect her suggestions. It's nearly to the polishing stage, but not quite ready and still coming in at 104,000 words -- which I expect to get under 100,000 before I am done with it.
I am 30,000 words into the first draft of the second novel in this spinoff series. In the meantime, I've published the sixth novel in the Seamus McCree series (False Bottom) and a follow-up novella (Furthermore).
~ Jim

Congratulations on completing your draft!

I love opening a new Word document and letting it rip, but the mopping up process at the end takes too many time-consuming revisions.

Instead, I'm freewriting in circles, trying to nail down the plot and subplots of my next book while I write random scenes. Almost there. New characters to create, too.

My first book I wrote as a pantser. I found it frustrating and the revisions slow because I needed time to analyze what needed revising and how those changes impacted the plot and other characters. One revising begat other revisions. I felt as though I were rewriting the entire book. So getting out that first draft quickly had little meaning, which is why I don't understand how or why you and other authors endorse doing that. Margaret's process seems eclectic, which appeals to me. But Linda Rodriguez starts with characters, and I think she's right. It's the characters that make me want to read more, often the backstory to me is more important than the plot. I'm doing a bit more planning this time. I don't want it to be cookie cutter, which can happen with a too well planned book, but I'm hoping that with a combination planning/pantsing approach, I'll have less revisions. For those authors in contracts--who have to produce a book in nine months--they have to have worked out some method that cuts down on revisions.

Congratulations on getting that first draft out, Jim. What a relief.

After years of pantsing, I have found an outline system that works for me, and I'm using it. I also find it helps me to edit each chapter as I finish it. Both of these events make the second draft quicker and cleaner and cut years off my work. That said, I was looking to leave the panster life behind. Each writer is different, each process is different what counts is what works for you.

Elizabeth George writes in 50 page chunks which works for me too.

I use an outline/timeline more now than when I started to write to get the sequence down. When my characters refuse to go on I know I have corrections to make. It's their story and I have to get out of their way.

Finishing a book, even if it needs lots of work, is quite an accomplishment. I don't know how you do it writing a complete draft without knowing who your villain is. But then, I'm a plotter through and through. Probably comes from years of writing technical documentation.

I love seeing other authors' book sausage - it makes me feel like my Wannabe Plotter/Pantser/Puzzler approach isn't quite as weird as it is.
And Nikki - hooray!

Margaret -- I've found that whatever works best is what we should do. Sounds like you've found something that works.

EB -- In previous blogs I've talked about why I wish I were a plotter, but for me it does not work. Better to have a sloppy first draft then no draft at all. As I commented to Margaret, people should do what works for them; for me that is pantsing the first draft.

Kait -- I am delighted you found an escape hatch from the pantser problems!

Warren -- I agree characters know better (as in my subconscious understands people much better than my conscious mind).

Shari -- Glad I can make you feel at home in your writing style by being even crazier! (And it's Niki with one k.)

Jim I'm almost finished with the first draft of my tenth book. However, lately I've been reading some of my published books and have decided to go back to make some changes with the current book I'm working on to add some previous characters in the earlier books. They're characters that my readers seemed to like. I still have to decide on who will be my bad guy murderer. I'm glad I'm retired with nothing to attend this coming week so hopefully I can make it all work out.

Gloria, I'm sure you'll get it right.

Congratulations, Jim, on your progress especially considering the changing venue and events in your life all the while during the Covid-19 crisis.

Thanks, EB. Feeling like the turtle racing against all the hares that are already out of sight.