Communing With Your Characters By Shea E. Butler 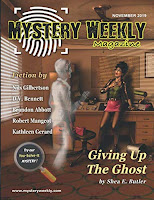 I am relatively new to the publishing world, having been published for the first time in the November 2019 issue of Mystery Weekly Magazine (a short story titled “Giving Up The Ghost”). Since then, I’ve had short stories published three more times, twice in anthologies and again in Mystery Weekly Magazine (as Sally Field once said, “You like me.”) But I’ve also sold several television scripts, written several feature film scripts and a comic book. They are all vastly different animals in terms of format and structure, as well as character and story arcs. One thing they do have in common, however, is that they all have characters who talked to me.

What, you may ask, do I mean by that? Exactly what I said. They all have characters who talked to me. Creating interesting, multi-faceted characters who are each unique, well-rounded individuals, and who speak and act like real people, is hard. Okay, let’s be real. Writing is hard. But writing great characters that engage your readers is especially hard. We all have our own way of creating those characters and keeping them within their story line and doing what you want (and need) them to do to move the plot and story forward. But they don’t always do what you want them to do. At least, mine don’t, and I have some lively conversations with them trying to convince them to do so. 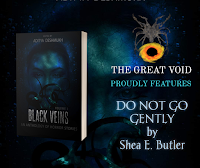 Do you commune with your characters? I do. In fact, it isn’t until I do start communing with them, whether via a dream, talking out loud with or shouting at them, free form writing or daydreaming about them and what they’d do or say, that I feel like they are really coming alive and popping.

I will freely admit that I’ve gotten some strange looks as I’ve communed with my various characters. Like the time I was sitting by myself at Starbucks writing and having a very lively argument with one of my characters. Out loud, no less. I was totally engrossed in my conversation and unaware of the odd looks thrown my way. Finally, one of the other patrons asked me if I was okay. I was a bit impatient as my conversation with my character had been interrupted. I hurriedly said I was fine and went back to my conversation. Yes, I do tend to be stubborn. I wanted to win that argument with my character. After all, I had created him. But the concerned and genuinely nice patron wasn’t going anywhere. However, as soon as I explained that I was a writer and that I had an ornery character who was insistent that he wouldn’t fall in love with the woman I plotted out for him to fall in love with (Nick told me he had a crush on the guy who lived in the apartment across the hall from him), the worried look left the woman’s face and she burst out laughing. Seemed that she, too, was a writer and totally understood. In fact, thanks to my more-stubborn-than-me (yup, I lost that argument thankfully) character, not only was a new plot line developed for my story, a wonderful friendship was born.

Just like we’re told to have pen and paper next to our beds so we can write down our dreams when we wake up, I use said pen and paper to write down the conversations I have with my characters when I dream about them and the various situations I put them in. I do the same in the car for those times I’m stuck in L.A. traffic and my imagination wanders into the world of my newest story. Helpful to have when my characters start communing with me about what they’d say or not say and what they’d do or not do. I believe (okay, hope) that the drivers next to me think I’m singing along to the radio and not talking to myself. If not, perhaps I’ll make another new friend!

Sometimes, while riding my horse, my mind will also wander into the world of my most current story. My characters will pop up and start going on tangents, straying from their well-thought-out story arcs. Some good (like my character Nick’s new romance), some bad. Riding a horse in the middle of Griffith Park is not conducive to writing down new ideas for your story or dialogue for a character. But not being able to jot down the essence and specifics of an idea or the snappy dialogue your character just gifted you with, is the pits. So, if you see a woman riding a horse in Griffith Park and dictating into her phone a plot point or some spiffy dialogue her character insisted upon, that’d be me. Handy little tool, that cell phone. 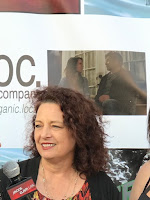 Shea E. Butler is, at heart, a storyteller. She’s a storyteller in many different fields: a television writer, a published author and an award-winning director/writer/producer for her short films and web series. She was that kid who huddled under the covers after “lights out” reading a book by flashlight. Born in Cairo, Egypt to American parents living abroad, Shea currently divides her time between Vancouver and Los Angeles. Her love for traveling and exploring worlds and cultures, both past, present, and future, was ignited at a young age. Shea’s most awe-inspiring trip was a horseback riding safari through the Okavango Delta in Botswana. Nothing like being charged by two lions to get your creative juices flowing!

Shea is currently working on her first novel and has a short story appearing on the SHORTZ phone app (chat stories) at end of January called “9-1-1.”

Shea’s most recent published work is “Neon Nights,” a short story which explores the age-old question, does the end justify the means? A burnt out, big city detective now working in a small southern town, has to ask herself just that when a serial killer and the FBI come to town.  Sammi’s fractured, tough but vulnerable, having seen too much working the city streets, but she still wants to do the right thing. But what, exactly, is the right thing? “Neon Nights” was published in the September 2020 issue of Mystery Weekly Magazine (available at https://www.amazon.com/dp/B08GV97SWV/)
Posted by E. B. Davis at 12:00 AM

I don't chat with my characters, but they are willing to pour out their deepest worries, fears, and hopes if I give them unfettered access to my fingers and keyboard and keep my own thoughts out of the way.

Congrats on your short story successes, and best of luck on your novel.

My characters talk to me all the time...usually telling me to get it right.

Congratulations on your recent publications.

Congratulations, Shea! They do like you, but you earned it.

My characters do talk to me, and they are usually right. On of my characters actually gloated that I'd missed all the clues and arrested a red herring. The character was correct and it was obvious when I went back and outlined the clues. Sheesh.