An Interview with Jane Willan by E. B. Davis

Youth itself could be so annoying.

The season of Epiphany is in full swing at Gwenafwy Abbey when ten new nuns from a convent in Los Angeles join the community of Anglican sisters in Wales. They bring energy, youthful enthusiasm, and more electronic equipment than Sister Agatha could have imagined. The arrival of the new nuns brings something else to the Abbey—a bit of unexpected notoriety. Claire McDonagh, an ambitious young reporter for The Church Times, interviews the new sisters for a feature story. Murder is the last thing on anyone’s mind when Claire is found dead on the beach, her mobile phone in the sand. A tragic death, says Constable Barnes. A selfie gone bad. Meanwhile, Sister Agatha is unconvinced and puts on her detective’s hat. Clues abound including the mysterious discovery of a missing key baked into the king’s cake for the feast of Epiphany. Sister Agatha’s tangled list of suspects includes even the abbey’s residents – and the beloved archbishop of Wales. Worst of all are her worries about the abbey's beloved Shetland pony, Bartimaeus, who may be reaching the end of a noble life. Time is running out as Sister Agatha uncovers a shocking reality. Will she reveal the truth hidden in an ancient document before it is too late? 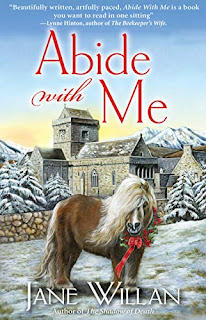 What I didn’t know when I agreed to read this book was that I’d already read a book in this series, loved it, wanted to interview the author, but the timing didn’t work out. Abide with Me, the third book in the Sister Agatha and Father Selwyn mysteries series, was released in November. It is a wonderful cozy page turner, and it is on Kindle Unlimited to read for free for those of you who subscribe to this service.

The Abbey becomes inundated with young women, ten young nuns from L.A. and a woman reporter from The Church Times, who is interviewing the young nuns. At sixty-two, Sister Agatha views the young women with kindness, but a certain tiredness that comes with age and too much experience. She takes up the investigation when the reporter falls to her death from the cliffs near the Abbey.

L. A. seems an unlikely place for nuns. Star hopefuls, models, surfers, etc., yes, but nuns? Are there really nuns in L.A.?

I’m glad to hear that L.A. seems unlikely—that’s why I put the convent there. I like putting things and people in unlikely places. It makes them more interesting. But to answer your question, I didn’t really do any research on West Coast religious orders although I am sure there are some.

Is the Abby Catholic? I was confused about the religion and the titles. Are there female bishops in the Catholic church? Why aren’t they called Priests, not Reverends or Fathers?

Gwenafwy Abbey is Anglican and the nuns belong to the Church in Wales. For a reference point, the Church in Wales could be described as the Church of England just in Wales. There are female vicars, certainly although I don’t know that there is a female bishop in Wales. Of course, all the better reason to create one in my book!

Why is the Abby in Wales tied so closely to Ireland?

Just for fun. It is near the Irish Sea and I thought giving it an Irish connection could lead to further storylines.

I loved the description of cheese making, which is the Abby’s source of revenue. Will eighty gallons of milk yield sixty-six pounds of cheese? Is the reduction of water the difference?

Hmmm…well, I thought that was correct when I wrote it. However, before you embark on heating eighty-six gallons of milk…look it up! Yes, it is the water reduction that makes the difference. I did take an all-day cheese making class a couple of years ago which was a lot of fun.

Why doesn’t Sister Samantha, one of the younger nuns from L.A., like the Reverend Mother?

It isn’t so much that Sister Samantha doesn’t like the Reverend Mother, it is that her world is falling
apart and so it is hard for her to like anyone.

Tomatoes for breakfast? Are they cooked?

Fried. And they are delicious.

What is a Welsh cake?

I love Welsh cakes. They are like little pancakes. Only better. Here is a link

What is Sister Agatha’s greatest wish and vanity? 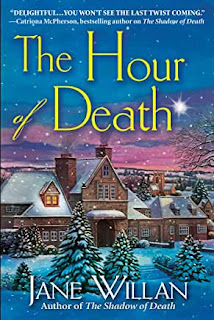 Because the Reverend Mother played basketball in her youth, she allows a few indulgences for herself and her charges. What are some of the few things allowed that defy the vow of poverty?

Well, Sister Agatha is allowed expensive journals to write in. Sister Harriet has her art supplies. Sister Winifred has the occasional expensive yarn spree. The vow of poverty is a gray area. I have been criticized by a couple of real nuns (Catholic) for misrepresenting the poverty of a religious life. They are probably correct, but the “indulgences” make for fun writing.

Although the victim took a selfie near the cliff where she fell, why did they assume it was a selfie gone wrong that resulted in her death. Couldn’t she have taken the selfie and been killed later? Wasn’t she old enough to know better?

Ah…the selfie!  No spoilers here. But Constable Barnes isn’t off the mark by assuming it is a selfie accident. The statistics on how many people fall to their deaths due to a “selfie gone bad” are staggering. And yes, she was old enough to know better! But the statistics are mostly about adults who take selfies that put them into danger.

What is a Welsh Brew?

Welsh Brew is a tea that is a popular tea in Wales.  I drink it all the time—when I am not drinking coffee.

Why is everyone just a little afraid of Sister Callwen?

Sister Callwen is one of those people who holds everyone, including herself, to a very high standard and she “doesn’t suffer fools gladly”. I think of her as a Welsh/religious version of Doc Martin.

Are intimate partners the perpetrators of more than half of women’s murders?

Yes. Women who are murdered are often murdered by those they were in relationship with.

The Epiphany cake sounds like that baked at Mardi Gras. Is there a correlation?

What is the significance of chalk on a lintel?

Chalking the Lintel is a way of blessing the house and asking that Christ is present throughout the year. The lintel is the horizontal support across the top of the door. The blessing that one writes with chalk (blessed by a priest) on the lintel is 20+C+M+B+21.  It is the year 2021 with the initials of the three magi in the middle. Caspar, Malchior, and Balthazar.

Once Constable Barnes is gone, Officer Clough collaborates with Sister Agatha to solve the murder. Why does he have so much faith in Sister Agatha?

She helped him solve a murder previously (in the last book) and so they have this detective’s bond. 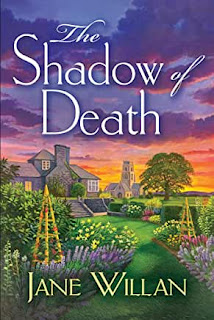 How did the word “snug” come about?

I got the word from an Irish restaurant that I go to. My clergy group meets in the “snug” at O’Connors in Worcester. When I found out its history, I incorporated it into the book.  This is from a webpage on the snug:

Irish women largely drank at home, dispatching someone else (often, their sons) to bring back a jug of porter. Some even sat outside pubs waiting for their menfolk to come back out. But inside many Irish pubs of the 19th and early 20th century, there would be a snug(little room) where women—and anyone else who didn’t want to be seen having a nip—could enjoy their pints privately. The snugs…would have a small window for bartenders to pass drinks through, so no one could see the patron order. They also had locks so that they couldn’t be opened from the outside, giving whoever was inside almost total privacy.

What is Perl Las cheese?

Perl las means “Blue Pearl” in Welsh. It is an organic blue cheese made by Caws Cenarth in Carmarthenshire. It is the most famous and highly regarded cheese in Wales.

Laver sauce is seaweed based? What happened to mint jelly?

Laverbread is made from an edible seaweed. It’s part of a traditional Welsh cuisine. I’ve never had it, but I hope to get the chance. No mint jelly…not as interesting!

Twypsyn is Welsh for “idiot”. I had a different Welsh word but my agent had me take it out because it wasn’t entirely a nice word and since Sister Agatha is a nun….she might not use it.

The Reverend Mother tells the story of a Welshman helping others from the World Trade Building during 911—is it a true story?

It is a true story. I heard the story told at a concert of Welsh choirs. It was told right before they sang Men of Harlech. Very moving.

Have you spent time in Wales doing research? Eating?

My husband and I went to Wales for our 10th wedding anniversary—2017 which was after I wrote the first book, but before the second.

What’s next for Sister Agatha and Father Selwyn?

I think it is time for Sister Agatha to find an agent for her novel and then perhaps….a dead body!

I've been craving a book set in Great Britain -now I've found it. Looking forward to a fun read and learning more about Bartimaeus, too. Long may he live :)

Kait,
This might be just the book-- or series-- for you. I hope you enjoy it!
Jane

Oh I hope so! it was a lot of fun to write so I am hoping that it is as much fun to read.
Jane

Hi Jane, looks like a winner. On my TBR pile. I love the sisters' little luxuries.

Creating the characters of the sisters was really fun. I hope you enjoy reading the book as much as I enjoyed writing it. Jane

Hi Jane, this sounds like it's right up my alley. I, too, love my luxurious little journals! Can't wait to read it. Congratulations!

Shari, so glad you are thinking of reading Abide With Me! I love little journals myself and so it was fun developing a character who likes them. Jane