A Writer's Take on "Little Women" by Susan Van Kirk

[Spoiler Alert: If you’ve never read Little Women and are planning to see the recent movie, you may want to stop reading HERE.]

Over the holiday I saw the new Greta Gerwig version of “Little Women” based on the novel by Louisa May Alcott. Truth be told, I plan to see it again this week because it has mesmerized me with its plotting and viewpoint. The first time I saw it was a delight, but the second time will be a study of how she did it. As both a writer and a viewer, I am intrigued by Director/Writer Gerwig’s choice—to tell the story in a non-linear plot, and to breathe a more modern voice into the lives of the March girls. This movie is unlike any version of the classic you’ve seen or read. 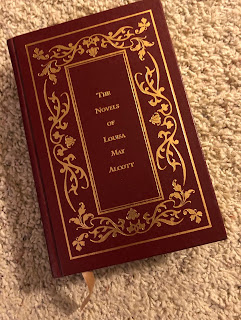 If you haven’t read the novel, here’s a very brief summary. Four sisters in the March family—Meg, Jo, Beth and Amy, grow from adolescence to adulthood beginning at the time of the Civil War. Their Concord, Massachusetts house also contains their beloved mother and a housekeeper, but their father is off to the war. This is a financially strapped household, but that doesn’t keep Marmee, their mother, from teaching them about generosity and kindness. They grow to adulthood navigating the social constraints women faced in the mid-1800s.

Alcott’s novel opens with the famous line, “Christmas won’t be Christmas without any presents” and proceeds in a linear fashion from the mid-1800s to their adult lives. But Gerwig turns this plot decision upside down, beginning the film seven years later when an adult Jo March is speaking with a New York publisher about her writing. She lives in a boarding house in the city and has met Professor Bhaer whom she will eventually marry. She doesn’t know that yet, but we do.

After this appointment, Gerwig crisscrosses back and forth with their younger lives in Concord. Back and forth. Back and forth. The New York Times review said it was as if Gerwig had carefully cut the book apart and put it back together in a different order. Like a book being stitched together—and yes, you see that too in the film—the viewers must pay close attention to the plot and which time period they’re observing. As a writer, this technique intrigued me.

Fiction writers deal all the time with what are called “backstory dumps.” How much of the past does the reader need to know in order to understand the plot and characters? Too much will bore the reader; too little may confuse her. Gerwig uses her back and forth plot to weave together the adult lives of the March girls with their pasts. She has a reason to do this as we’ll see.

Besides meeting Jo March in New York, we also meet a grown-up Amy studying art in Paris. She runs across Laurie, who was the March’s neighbor in Concord. We know she will marry him, but first we must go back in time and watch his earlier love, Jo March, dump him.

Meg March will end up with Laurie’s former tutor and, according to Aunt March, be doomed to a life of poverty. How did that happen when we saw her—in the past—go to a debutante ball and long for the life of beautiful clothing and handsome suitors? The back and forth scenes explain what happened.

Always there is the specter of the death of Beth March, the quiet, musical daughter, and that hangs over the scenes of the past like a dark cloud. We also see Jo’s desperate attempt to save her, and how Beth's death affects the family into the future. Time and memory is a complicated thing, isn’t it?

All these relationships play out in a world of gender, class, and time. This is beautifully displayed in the second literary technique I admired in Gerwig’s choices. As the publisher tells Jo, he can’t produce her book unless her heroine dies or marries—both of which seem to be weighed equally for women. Throughout the non-linear retelling, the question of a woman’s freedom, independence, and frustration with social constraints appears in many of the scenes. By using a nonlinear plot, Gerwig makes these points so clearly, and they resonate with the many decisions women must make for their lives today. This gives the movie a modern feel.

We already know the fate of each March girl, but by sewing the plot together with past and future intermingled, we see the “why.” We can sit back and consider how each of them responded to her place in a time when marriage was deemed an “economic necessity” for women, and a woman becoming an author was seemingly impossible.

Gerwig has used her decisions about plot and voice to delight us with the “becoming” of the four March sisters. Even the end of her movie is not an ending Alcott could have used—nor did she—but I believe she would have loved it.

Have you seen this movie, and, if so, what did you think?

Thanks, Joanne. You write such great movie reviews. I'm trying to catch up!

Definitely intigued! Thanks for your review!

It's been years since I read Little Women. I plan to go see the movie.

Unless I am getting my youthful reads mixed up, (which is possible) I was puzzled by the presentation that they felt sorry for themselves, being very poor, when there were others around them (the Hummels?) who were much poorer. And I think they had a housekeeper, or at least someone who came in to help. Seemed to me like the entire set-up was biased in favor of girls with pretensions, who could not afford to live luxurious lives, but did little practical to change their situation.

Thank you! I haven't seen the movie and am going tomorrow. I love your comments as much as I loved the book. Can't wait to see the film.

I understand your concerns, KM, but I didn't get the pretensions thing at all. Meg is the one who does love to think about a life with money, but she ends up marrying a poor tutor for love. The relative with money, Aunt March, is very much driven by money, and I'd not call her a lovely person. The point, I believe, is that in the 1860s with her husband off to war, Marmee had little choice about how to feed her family. There is nothing she can do. Even so, she is generous to her neighbors who have less. The options open to women back then were so narrow. If you do go to see the movie, let me know what you think after recalling the book.

Edith, I think you will really enjoy this movie, and it will cause you to think about the plot techniques days later.

Susan,
As you know, I loved this version of Little Women. The cinemtography is outstanding. I especially liked seeing the interplay and relationships of the 4 sisters, their relationship to their parents especially their mother, and to Laurie. His personality is certainly different in this version of Little Women. And so is Jo's thinking that she'd made a mistake by not accepting his proposal. Then she suddenly is in love with the professor? Doesn't quite work for me. Nor does Laurie's sudden change from an alcoholic do-nothing to a responsible loving husband and member of society. But these quibbles didn't take away my enjoyment of this wonderful film.

The movie sounds fascinating! Little Women was never my favorite--I much preferred Anne of Green Gables and Laura Ingalls Wilder. But I'm intrigued enough to see the movie.

I'd agree with you on your "quibbles." The men in this story are non-existent compared to the women. But I think that was true to the novel although it has been a long time since I've read it. I was intrigued by the way she changed the plot around and incorporated so many scenes that connected by the cinematography, the music (which was also luscious.) I think this may be my favorite rendition of the various films.

As a writer and a woman, Margaret, I think you'll find this movie intriguing. I've written some books that go back and forth in time, and it is always a challenge to connect the scenes. This writer/director seems to have done it effortlessly.

Thanks for the review, Susan. I haven't seen it yet, but it sounds intriguing. I often wondered when seeing one of the earlier versions whether I would have been quite as upset with Jo's decision to reject Laurie's proposal if he hadn't been played by handsome Peter Lawford.

We saw it New Year's Eve and I thought it was a terrific version. I liked the 90's version, but I believe I preferred this one because I liked the non-chronological pace. My sister said she was a bit skeptical at first, but came to appreciate it. Saorise Ronan is incredible; from Atonement, to The Lovely Bones, to Brooklyn, I have never see her play a false note. Laura Dern was great as Marmee and it was so good to see Chris Cooper again. All of the sisters were well played. And Timothy Chalamet did a great job as Laurie. I didn't care him for much when he played opposite Saorise in "Ladybird" but mainly because I thought his character was obnoxious. And I do believe that Greta Gerwig deserves an Oscar for directing; she did a fabulous job.

Thanks for this review, Susan. I've seen EVERY version ever made, I think, and I found the best so far was with Susan Sarandon (Susans of the world, unite!). So okay, I'm looking forward to this next one, later this month. It will be interesting to see this new approach, and of course, most of us already know the futures of all the girls (sorry, Joey, but yes, Beth dies).

Grace, Thanks for commenting. You are going waaay back with Peter Lawford playing Laurie. I think you would find this new version quite intriguing.

Judith, I agree with you about the Oscar for Greta Gerwig! I think you are right on the nose about the acting. I also loved both the music score and the cinematography. I hope the people who vote recognize what an amazing adaptation this is.

Susan, I, too, liked the Susan Sarandon version and I loaned it to a friend this week to watch because she needed a "refresher" on the story. Please let me know what you think of it after you see it.