Pursuing Your Dreams by Karen McCarthy

Is it ever too late to pursue your dreams? Is there a line that Life draws saying "Well, you are too old to be an author now? Should have taken care of that long ago." I'm afraid there are many secretly aspiring authors who think just that. I am too old. I don't have what it takes anymore. I really have no talent or it would have shown up by now. The fire in the belly is burned out. 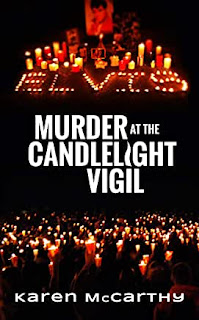 I am happy to report that this is not so. I have just published my first book Murder at the Candlelight Vigil, and I am 75-years-old. After a long and satisfying career of being a divorce attorney, I gathered up the tenacity and determination that got me though law school in my thirties, with a small child at home, and dragged out the varied and disorganized parts of that novel I had been pecking away at for year.

My "hook" was the idea of a murder taking place at the annual candlelight vigil at Graceland, Elvis's mansion in Memphis, where tens of thousands of fans congregate every August to commemorate his death. "Elvis Week" is a wild and zany time of Elvismania that makes a perfect backdrop for a mystery. And I had the fun of traipsing through all the Elvis sites to research the visits my characters would make. Well, until death pretty much ruined the party spirit for them.

The book takes place where I live, so all scenes that are real places are readily accessible. Thus, I worked around my age and the fact I don't have the energy anymore to travel to far flung places, or the patience to spend hours researching past times or other cultures. Touring Sun Studios where Elvis made his first record, or the housing project where he lived as a child was a treat for this lifelong fan. The candlelight vigil itself is a one-of-a-kind experience, with its combination of kitsch and devotion, candles and altars, flowers and Elvis tattoos, the velvet voice floating over it all.

The writing itself had been done at various times over the years, with long pauses when life got in the way, and putting it all together was greatly aided by two fabulous editors whom I hired to exert strict discipline with the red pencil. Many, many rewrites and revisions later, the finished product has been a surprising success and the warm feedback and accolades I have received (including 46 five-star reviews on Amazon thus far) made it all worthwhile. This was my ultimate bucket list item, and I have done it.

I am thrilled that self-publishing through Amazon has become a mainstream road to achieving publishing success. I am also relieved that it is no longer necessary to go through the horrors of time-consuming query letters, rejections and trying to get through the gatekeepers in New York. Learning the technicalities of self publishing was made easier by the dozens of courses or books available to take you through this step by step. You don't have to be a computer genius to figure this out!

Are you one of the writers who feared it was too late for you? Now is our time to fulfill our dream of being an author, and it is not too late!

Amid the zany madness that is Elvis Week in Memphis seven old friends reunite, with death as an unwelcome guest.
It's August in Memphis, and August means Elvis. For decades the fans have come from all over the world to pay tribute to the King of Rock and Roll. “Elvis Week” will be capped by the famous candlelight vigil at Graceland, his mansion south of the city. Among those attending are "The Magnificent Seven," baby boomers who were Elvis fans and classmates in college years ago.

One of these women will not leave Memphis alive. One of them is her murderer.

Mac McCalla, the Memphis lawyer who finds them all on her doorstep, is uneasy with the murky undercurrents between her old friends as they tour the Elvis sites. Her fears are borne out when a clash of past and present leaves one of them dead. Which of these seemingly ordinary women has crossed the line and become a killer?

As the carnival atmosphere of Elvis mania unfolds around her, Mac discovers that the answer lies in who these women were so long ago. The secrets that have followed them through the years are revealed one by one until finally Mac finds herself in a near-fatal confrontation with a friend unmasked as a murderer.

Cross an attorney who practiced law in Memphis, TN for twenty-five years with a life-long Elvis fan and you find an author who just knows it would be fun to set a mystery novel with a legal twist amid the bizarre and captivating atmosphere that pervades Memphis every year during Elvis Week.

Karen McCarthy is a baby boomer herself, and she liked the idea of a reunion of old college chums who come to enjoy the festivities, where one of them ends up dead. It was a Memphis story just waiting for a southern gal to tell. Her pro bono work with the Abused Women's Shelter and Legal Services gave her the idea for the plot and helped create the courtroom scenes. Having visited all of the hallowed spots favored by the King herself, she pilots her characters through the swirling fans that mob the city every August. The ghost of Elvis provides the crucial clue.

Karen is a world traveler, having been up the Amazon and down the Danube, from Tahiti to Russia and even saw a Tasmanian devil in Tasmania. Her love of the American West has resulted in multiple skiing trips and a long and hot four-day rafting trip through the Grand Canyon. She divides her time between Memphis and her home in Key West, Florida where she can be found out on her boat, the Dragon Lady, or kayaking and scuba diving. She makes flying visits to Dallas to see her son and his family who live with a dog named Presley. Presley is featured in the book under an alias.
Posted by E. B. Davis at 12:00 AM

congratulations on your publishing successes!

Thank you, Margaret! It was a long slog!

It's never too late! Follow your dreams. And congratulations on the publication. That in itself is a satisfying accomplishment.

Congratulations on your book and the great reviews. Frankly, my dear, age brings voice in the writer's world, at least that's my view!

Welcome to the club.

Thank you for the congratulations and I agree that age brings voice. It sometimes seems to be a young person's world, but this is an area where experience and sheer life lived through are an asset.