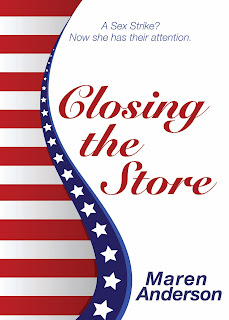 In 2008, I was trying to write my first novel. I wanted to write something funny and absurd, so I based my book on Aristophanes’s sex-strike play, The Lysistrata. When I was done, I thought I had written an off-the-wall novel about sex and politics, but to my surprise, the crazy presidential race I imagined in 2008 seemed, well, not so crazy in 2016.

The literary theorist in me makes the distinction between an absurdist story (like Rosencrantz and Guildenstern Are Dead) and absurd humor (like Monty Python’s Flying Circus). My novel Closing the Store is not a bleak story where characters try to cope with existential crises by endlessly flipping coins. Rather, it is a novel in which women try to attain world peace with a strip tease.

While I was writing the book, though, I wasn’t interested in whether it would be more Kafka-esque or Python-ian. I was simply having fun. Writing something with an absurd premise allowed me to use the tropes, stereotypes, and memes that made me happy. Since I was writing for my own enjoyment, I actually finished the book. But I never thought anyone would read it.

Fast forward eight years. In the winter of 2016, I was amazed by how weird the presidential election was becoming, so I offered my silly political novel to my publisher who published it.  As the campaign progressed, actual presidential candidates began behaving more and more like my absurd characters. Naturally, none of us knew that the election would turn out the way it did, but now my absurd book feels damn near prescient.

This brings me to the other supposedly absurd part of my book: whole sex strike thing. Aristophanes was pretty plain that, while the tactic worked in his play, he didn’t think a sex strike could actually be pulled off. His other plays contained truly absurd elements like talking frogs and ladders to the clouds.

However, in my lifetime there have been many sex and women’s strikes that worked. Notably, in 1975, 90% of women in Iceland went on strike (that is, they did no work, including housework or caring for children) to protest inequality. In 2003, women in Liberia held a sex strike (that is, rebellious celibacy) that helped rid the country of Charles Taylor. In 2016, Polish there was a women’s strike to protest a proposed total abortion ban. And the day after President Trump’s inauguration, 4 million women around the world marched to protest his election. I guess we don’t know if that last one has “worked” yet.

It blows my mind that both the political and the sex-strike parts of Closing the Store have gone from truly absurd to nearing normality in the span of eight years. It makes me wonder what Aristophanes might think. Perhaps he’d say that we are in for a spate of talking frogs.

Bio:
Maren Bradley Anderson is a writer, teacher and alpaca rancher in Oregon.  She teaches English at Western Oregon University and novel writing to new authors. She fills her days caring for alpacas, playing with her kids, and reading books that make her laugh. She has written two plays for the Apple Box Children’s Theater, and her poetry has appeared in The Timberline Review. Her novels Fuzzy Logic and Closing the Store are available online and through your local bookstore—just ask them to order them for you.

I saw a memorable performance of "Lysistrata Jones" at the U of Cincinnati last year, complete with an elaborate dance number on a basketball court on the stage. So funny and so wonderful.

This sounds like an interesting book, and quite timely, too.

Another example of life imitating fiction?

If anyone tried to write serious fiction about the recent election for president & the results, it would not have been accepted. It would be consigned to political satire and off-the-wall fantasy.

I hope you do well with your novel, which is now quite timely!