Lies and the Lying Liars Who Tell Them 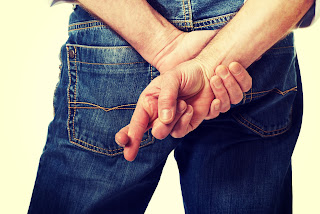 I was recently asked to give a speech at the very first college I attended, known then as Middle Georgia College. I love homecomings of all kinds, but this one was especially poignant because I was returning to the place where I received some of my first, and best, encouragement as a fledgling writer. I knew I’d be speaking to students, young people like I’d been thirty years previously, hungry for inspiration and wise words.

I tried to think of what good advice I could offer. And this is what I came up with: Learn to lie like a pro. Because until you can tell a good lie, you’ll never be able to tell a good truth.

Now, I’m not going to make a moral argument for or against lying here. I leave that to the parents and priests and parole officers of the world. After all, I make my living telling lies, big complicated ones. I’m working on Book Six of my most popular lie right now, an amateur sleuth mystery series, and one of the themes I explore in these books is the human taste for deception.

My narrator is a woman who used to work as a tour guide in Savannah, Georgia. Now if you think that means she traffics in facts, you don’t understand the nature of the Savannah tour industry. They recently filed a lawsuit against the city, which wanted to create an ordinance requiring that tour guides who advertised that they were giving historical tours should stick to, you know, historical facts. The tour guide association declared this proposed ordinance a violation of their employees’ First Amendment rights, and the city backed down, thereby enshrining interesting history over actual history.

So this is my narrator’s background. Just for fun, I hooked her up with an ex-SWAT agent as her partner in crime solving, a man recovering from a very specific injury to a very specific part of the right front lobe that—and this is a fact here, not a lie; I learned about it in Scientific American—renders people significantly better than average at telling when others are lying. Better even than CIA-trained operatives.

So I have her, a skilled and unrepentant liar, and I have him, a rule-obsessed straight arrow with a brain that’s a virtual lie detector. And I put them in books where people steal, blackmail, assault, connive, murder, extort, threaten, and, of course, lie about it. A lot.

This part is very much a reflection of American culture. Some studies estimate that for every ten minutes of conversation, Americans tell four lies. Look how rife our language is with words for lying, and how pretty those words are: prevaricate, exaggerate, confabulate, deceive.

Our brains are lying machines, and that is no small thing. Lying is one of those things so complicated we shouldn’t be able to do it, like driving. After all, telling the truth is a straightforward proposition. Telling a lie, however, involves not only knowing the truth, but being able to hold that knowledge in one hand, and in the other, create an equally compelling, equally plausible, fiction. Then we must be able to share that fiction in a persuasive manner, often making it up on the spot as we go along, without losing our grasp on the first story, the factual one. It’s mental gymnastics of a relatively high order.

So don’t be afraid to give your lying brain free rein every now and then. Just be sure to use your powers for good, not evil, and don’t tell your mother I said any of this.

Tina Whittle writes the Tai Randolph mysteries for Poisoned Pen Press. The fifth book in this Atlanta-based series—Reckoning and Ruin—was released in April. Tina is a proud member of Sisters in Crime and serves as both a chapter officer and national board member. Visit her website to follow her on social media, sign up for her newsletter, or read additional scenes and short stories: www.tinawhittle.com.

Revisionist history - what a concept! Where would history be without all that revision? I admit to laughing out loud, Tina. Thank you -- a great way to start the day.

Interesting concept about how our brains, and lies, work. Makes me wonder about those folks who lie first and then wonder if the truth would have served them better. It's always fun to discover the tells. Then watch for them. Sort of a parlor game at times.

I think the tour guide association story you told is wonderful. Everyone listens to the truth, but what people really want to know are the legends--because there's a bit of truth in legends with loads of other possibilities--like good stories that make you wonder. And everyone knows that truth is merely someone's interpretation. Great speech!

One of my dearest writer friends is a professional historian -- he says the big secret of history is that it is all constructed narrative. He's very good at constructing that narrative so that what would otherwise be a collection of facts is actually a story (which is why he's also a fantastic writer of both non-fiction and fiction).

Lying and storytelling go hand in hand neurologically speaking, as does our appreciation and talent (or lack of talent) with each.

Here's to tells and legends!

You will always get a generous helping of both history and story in Savannah.

Hi Tina, Oh, this was great! I bet the students loved your talk. My mom always said, "Tell the truth and shame the devil" and look what happened - she got a professional liar (writer) for a kid.
Savannah is on my Someday Travel list - I can't wait to hear the stories, true and not-so-true.

I am shocked, shocked I tell you, to discover that there are lies on this website.

I'm so sorry to have discombobulated your Tuesday, Warren. If it makes you feel better, I am certain that everyone here at Writers Who Kill deals only in the pristine truth. Sure of it, I am.

Shari, I hope you get down Savannah way. We would love to join you on a story scavenger hunt. The devil would certainly approve.

"When the legend becomes fact, print the legend" - The Man Who Shot Liberty Valence

I really enjoyed reading this. I rarely tell lies, but as a kid sometimes I did so I wouldn't get punished. If I fudge the truth it's so I don't hurt someone's feelings. Afterall there are the good lies, too. When I was teaching third grade, I told my students they had to write thank you letters to an aunt or grandmother for something they got for their birthday or Christmas that they absolutely didn't like, and they were to thank the person without hurting their feelings. For instance, I would give them ideas of what they might have received that they wouldn't like. It was fun reading those letters because they had a terrible time trying to lie because they'd always been told lies were bad. That's probably why kids are so blunt and truthful when they make comments.

Funny and sort of true, too, Tina! Thanks for brightening my day. One of the best books on writing I know is by Lawrence Block and is called - wait for it! - Telling Lies for Fun and Profit.

And thanks for your story, Gloria. I don't think it's a coincidence that in Southern vernacular, "telling stories" in a euphemism for lying. And we do divide them up into little white lies and lies of the other variety.

One of the things about a well-told, and repeated, lie: it becomes our truth. If that fish we caught was 16”, not 12” and we tell the fish tale many times, we may eventually forget that the fish was, in fact, only a foot long.

And here’s another thing about lies: you have to have a good memory (or tell it so often it becomes our truth). This is especially true about interesting lies because other people will remember them!

You are absolutely right, Jim -- and our brain assists us in this matter by rewriting our memory to show a 16" fish. I've often heard neuroscientists say that the stronger the memory, the more likely it is to have been altered (because weak memories are culled --only those that we continually call up stay vibrant, but every time we call it up, we get our fingerprints on it).

I think we all get to the point where fact & fiction intermingle in our minds. I know I do. And then there's the entire area of perspective. History is written by the victors, and eventually their experience becomes "fact."

The more I learn about how memory works, the more I put quotations around the word "fact."