Where did that idea come from? By Paty Jager

I don’t know about you, but there have been times I’ve read a good murder mystery and then I meet the elderly lady, or the soccer mom, or the young man who wrote the book and think, “Whoa! That villain or horrendous murder came from that person’s mind?”
And yet, as I sit at my desk or drive a hay swather or tractor or even ride the hills on my horse, my brain is constantly looking for ways to kill a character in a book. Everyone at some point in their lives, whether they write or have just had tough times, has secretly thought about killing someone. The good news is most of the population only fantasizes, knowing it is morally wrong.
That is how I came to write my first mystery three decades ago. A married woman, who I thought was a friend and whose children were good friends with our children, fooled around with a married man, breaking up two families we knew. When she was confronted by her husband, she accused my husband of being the person she was fooling around with to throw her husband off the real person. Mad? I was furious! It not only ruined our friendship but the friendships of our children and the other family.
I had been thinking about dabbling in writing a mystery. That anger triggered me to write two novels killing off that woman in each book. It was very therapeutic! However, when I couldn’t find resources to help me hone my mystery writing skills, I joined Romance Writers of America and learned craft and the business of writing. I had a small mystery element in all the romance books I wrote, but I still really wanted to write a mystery series.
In 2014, I wrote the beginning of the Shandra Higheagle Mystery series, and I’m loving every minute of the journey with her and her sidekicks: Detective Ryan Greer; her helper, Crazy Lil; Sheba (a cowardly dog the size of a pony); and Lewis the cat who rides around Lil’s neck like a fur stole. 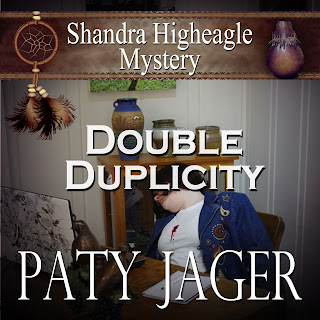 The first book of this series came about from my brother, a bronze sculptor who also does patina work for other artists. He was telling me about a piece that weighed three to four hundred pounds but had a detachable part that would make a good murder weapon. That kept swirling in my head until I came up with my amateur sleuth who is half Native American and is a potter. This put her in the art world and gave me access to a gallery with this statue, which became the setting for the murder in Double Duplicity.
After that I was hooked on my main characters; the ski resort community; the secondary characters that make up the people around Shandra; and her Nez Perce family that live on the Colville Reservation. The other thing that holds my interest in the series is coming up with Shandra’s dreams that include her deceased Nez Perce grandmother who gives her clues to the murders.
What aspects of a mystery series keeps you coming back for more?  I’ll pick three names from everyone who leaves a comment, along with a Facebook address so I can message you, for a code to download the audio book of Double Duplicity the first book in the series for free.
You can also get Double Duplicity for free as an ebook at all ebook vendors. Tarnished Remains, the second book, is also available in audio. Book Three will soon be in audio production. There are currently seven books in the series with #8 coming out the end of the month.
Paty Jager is an award-winning author of 30+ novels, novellas, and short stories of murder mystery, western romance, and action adventure. Double Duplicity was a mystery was runner-up in the 2016 RONE Award Mystery category and Reservation Revenge is a nominee in 2017. This is what Mysteries Etc says about her Shandra Higheagle mystery series: “Mystery, romance, small town, and Native American heritage combine to make a compelling read.” 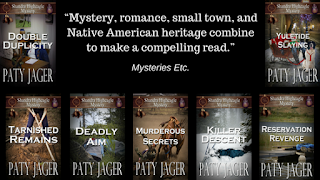 Thanks for sharing your thoughts with us. Ideas for stories are all around us, and as you point out, incorporating your own feelings into stories make for intriguing tales and infuse a strong sense of reality into them.

You gave us a good example of incorporating life events into fiction.

Good luck with your series, Paty! Thanks for blogging with us.

Paty, this sounds like a series I would love. As for wanting to murder someone in real life the closest I came to that was when my husband of 31 years had a midlife crises and left me.
What was most therapeutic for my was when I bought an old farm house and with my son, we took axes and hammers to the walls so my son could put new wiring into the house. Also, the first short story I wrote was called "Cheating On Your Husband Can Get You Killed," which won The Love is Murder contest and was in Crime Spree magazine. I let go of my anger less than a year after he left. I started a year or so later writing my mystery series, but I haven't murdered a cheating husband yet in it. Since I only read print books that I can hold in my hands, don't pick me.

I'm sorry I didn't know when this was posting. I'll spread the word today.
KM, yes, it helps to have a bit of yourself in the mix when writing. Thanks for having me on the blog.

Hi E.B., thanks for having me!

HI Gloria, Thank you. Sorry to hear your story but glad you have come through it and are writing great books.