In a Lonely Place by Dorothy B. Hughes: A Review by Warren Bull

In a Lonely Place by Dorothy B. Hughes: A Review by Warren Bull 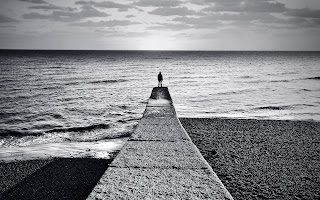 In a Lonely Place was published in 1947.  In 1949 it was made into a noir film staring Humphrey Bogart, which is considered by many to be a classic even though the film deviated considerably from the novel.

In a Lonely Place was one of the first novels told from the point-of-view of the criminal. In my opinion it is successful in conveying the story from that point-of view.  It is chilling without being gory. None of the actual murders were described as they happened. But the book maintains an atmosphere of menace. I am reminded of the shower scene in the movie Psycho. In that scene the viewer never sees the knife make contact with the victim, but it is shocking nonetheless to see the results of the stabbing.

By the way, if you are interested in the development of crime fiction over time, Jim Thompson’s The Killer Inside Me, another excellent work from a murderer’s point of view, was published in 1952.
Dortohy B. Hughes gives a believable account of the criminal’s thoughts and emotions. As a reader I felt the drive the criminal feels toward committing murder. I did not find the killer likeable, but I could understand, at least at a minimal level, the actions that he took.

This is not a who-done-it. It is more of a how-are-they-going-to-catch-him book. It is very skillfully written. The tension builds throughout. If you want to understand how to write suspense, this would be a good book to study. I recommend it highly.
Posted by Warren Bull at 12:00 AM

Warren, another good book review from you. I'd never heard of this book before or the movie.

This sounds like an early example of psychological suspense, a genre that I love. I will have to see if I can find a copy. Thanks for pointing it out.

I adore the writing of Dorothy B. Hughes. Thanks for this review. I haven't read this one.

A good book review as usual. Your reviews help me to choose the right book for reading. Thank you for sharing a selection of books for reading.