An Interview with the 2016 Agatha Best Short Story Author Nominees


The annual Malice Domestic conference, which takes place this year in Bethesda, Maryland, the last weekend in April, celebrates the best in the “traditional mystery.” Its Agatha awards (for Agatha Christie) recognize excellence in novels and stories that focus on crime resolution. This year’s short story author nominees are talented, versatile, and extremely creative, as their nominated stories clearly demonstrate.

We welcome Gretchen, Barb, Edith, B.K. (Bonnie), and Art to WRITERS WHO KILL to answer a couple of questions about how they weave their magic. Enjoy their answers, then take the opportunity to read their nominated stories (just click on the links above). You’ll be delighted by their inventiveness and skill. Thanks so much and best wishes to you all! -- Paula Gail Benson

TELL US ABOUT YOUR STORY’S PROTAGONIST. IS THIS PROTAGONIST A NEW OR CONTINUING CHARACTER IN YOUR WRITING?

I wrote “Double Jinx,” featuring July Jackson, to introduce her into the core cast of characters in my Davis Way Crime Capers (Henery Press). July is brand spanking new and here to stay. She goes on to fill the nanny position for my main character Davis Way’s toddler twins in the sixth full-length installment of my series, just released, Double Up. 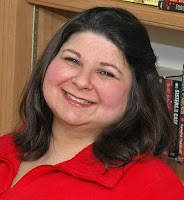 My main character is named Eloise Nickel. If that name somehow sounds familiar, it’s supposed to. Nearly every character in “The Best-Laid Plans” is named after someone associated with the Malice Domestic convention (including the convention in the story: Malice International). Sometimes a character’s name rhymes with the real person the character is named in honor of. Sometimes the character’s name associates with the real person’s name. (For instance, a character in the book named Cherub is in honor of a real-life woman named Angel.) Eloise is a new character for me.

Eloise writes a long-established cozy mystery series. She’s considered a grande dame in the field, and she is being honored this year by Malice International for her lifetime achievement. She’s in her sixties and has a nice grandmotherly persona. This plays to her advantage because when Malice’s guest of honor--Eloise’s nemesis--crosses her (insinuating in Mystery Queen Magazine that Eloise is elderly and her books are boring), Eloise is able to craft a revenge plan that no one would attribute to her since everyone thinks she’s so nice. And indeed her plan is cozy. Eloise aims to inflict pain but not death. And she aims for it to all go down at the Malice convention. 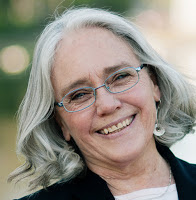 My story’s protagonist is Rose Carroll, an unmarried Quaker midwife and amateur sleuth in an 1888 Massachusetts mill town. She is also the protagonist of my Quaker Midwife novels - the first of which, Delivering the Truth, is nominated this year for Best Historical Mystery! Called to Justice, book two, releases on April 8, and I am under contract for at least five books in the series (so far). Rose is a good listener and cares about her pregnant and birthing women. She experiences ongoing tension between her love for a non-Quaker doctor and the strictures of her faith, but her faith also conflicts with mainstream culture. 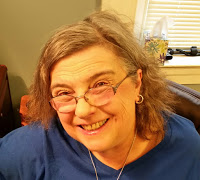 “The Last Blue Glass” is a stand-alone story, so Cathy Morrell is a new character. Cathy’s not a glamorous, exciting protagonist. She’s quiet and unpretentious, the sort of person others tend to discount and take for granted. Her most striking characteristic is her devotion to her husband, Frank. She considers him more talented and sensitive than she is, and she does all she can to protect him and make him happy—accepting his decisions even when she thinks he’s making a mistake, putting her own hopes on hold, working hard to help him live his dreams. Almost anyone looking at their marriage, including Cathy, would see Frank as its dynamic center, see Cathy as playing a supporting role at most. But in the end, Cathy discovers that she can be stronger and more determined than she’d ever imagined, and that someone who discounted her may have made a deadly mistake.

Maggie, the young mother in “Parallel Play,” is a new character, and while I don’t anticipate returning to her story beyond this, I feel she’s maybe as sharply focused a character as I’ve yet been able to create: a woman still trying to navigate new parenthood—her relationships and responsibilities both to her son and to her husband, the whole dynamic—and suddenly finding herself having to defend so much that’s near and dear to her. I wrote this story while a new dad myself, and while none of the parents here are my wife or me (a necessary disclaimer, as you’ll see!), channeling the concerns and pressures of parenthood into the story introduced what seemed to me some greater depth of character and tautness of tension that I’ve sensed in my earlier work.

HOW HAS YOUR SETTING CONTRIBUTED TO YOUR CHARACTERIZATION AND PLOT DEVELOPMENT?

My series is set in a casino, my main characters are the staff of a covert security team, so setting plays a huge role in characterization and plot development. By its very nature, the casino setting lends itself to endless plots centered around cons, scams, and the occasional dead body, giving my characters ongoing opportunities to shine.

I wrote the story with the actual setting of Malice Domestic in mind, and it plays into the plot of every scene. The long hallways outside the hotel rooms, the atrium signing area, the bar in the lobby, the bathroom by the bar, the two restaurants attached to the hotel, the three-flight-long staircase connecting the lowest level of the hotel to the penultimate level. I also made use of typical Malice programming, including The You’ve Got Fan Mail panel, the timing of signings, and the honoree interviews. I served as Malice program chair for six years and know the convention inside out. I figured I’d make use of my knowledge.

The setting also affects the characterization of the protagonist and the antagonist, and that’s all I’m going to say about that. I don’t want to spoil the story for anyone who hasn’t read it yet. Happy reading!

My physical setting is the town I live in—Amesbury, Massachusetts—but in the late 1880s. The time setting governs certain crime-solving techniques, of course. Fingerprinting and blood typing were not in use at the time. And it contributes to the characters acting in a manner consistent with the era—mostly. Rose Carroll is a bit of an outsider: she’s a Quaker, didn’t grow up in the town, and is a forthright independent businesswoman of 24. These mattered a lot more back then than they might in contemporary times. Her outsider status also makes her a good amateur sleuth, as does working as a midwife, where she goes places and hears secrets the detectives aren’t able to.

I had fun with the settings in “The Last Blue Glass.” The story begins and ends in Boston, where my husband and I went to graduate school right after we got married. The middle scenes take place at a bar called Taps, located on the road between Lynchburg, Virginia, and Charlottesville. We lived in Lynchburg for several years, often drove to Charlottesville, and once stopped at a coffee house that served, very loosely, as the inspiration for Taps. So I enjoyed the personal connections. Beyond that, the different settings reflect different stages in Cathy and Frank’s marriage. In Boston, when they’re newlyweds, their lives are dominated by Frank’s family and friends. Virginia represents an attempt to break free, as Cathy and Frank try to carve out a radically different sort of life for themselves. But Frank buckles, they return to Boston, and Frank’s family and friends again wield a decisive influence in their lives, bringing conflicts to a crisis. I certainly don’t mean to demonize Boston and idealize Virginia—far from it! I love Boston, and I treasure our years there. But I wanted to have the story come full circle, and the changes in setting helped underscore that structure. 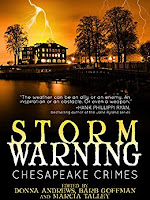 “Parallel Play” appeared in the latest volume of the Chesapeake Crimes anthology series, subtitled Storm Warning and with weather as the theme. The weather does indeed play a role here—a torrential downpour that helps set the plot in motion and maybe echoes the characters’ emotional storminess as well. But two specific places served as inspiration here as much as the weather. The story’s opening takes place in Teeter Toddlers, a fictionalized version of something like The Little Gym or Gymboree, where parents bring their young children for playtime and socializing. I took my own son to these classes every week for a long while, and I found it fascinating to watch both how the children interacted with one another (or didn’t) and how the parents formed friendships (or, of course, didn’t); thinking about the dynamics of that small community first sparked the idea for these characters and how they become entwined. The other place is a curvy road that leads from a major highway near our house in Northern Virginia to the small town of Clifton nearby. It’s a twisty road with lots of hills, which I hope might match the story’s own plot twists and emotional ups and downs, but the road has also struck me as a lonely stretch, and it’s that loneliness and sense of isolation, not just geographic but psychological, that ultimately proved the driving force for so much of these characters and their journeys.

Thanks so much for hosting us, Paula! So pleased to be part of this fine group of authors, and looking forward to seeing everyone at Malice!

I love hearing about my fellow nominees' stories from the inside! Thanks for hosting us, Paula.

We love having the Agatha nominees to talk about their work. What a stellar group of writers and stories this year. Thank you, Art, Barb, Bonnie, Edith, and Gretchen, for sharing your creativity with us. I am always looking forward to reading your next publications!

There is a lot of useful information for writers here.

Thanks for hosting us, Paula! I enjoyed responding to your questions, and also enjoyed reading my colleagues' responses. It's interesting to see how many of us choose settings that have some sort of connection to our own experiences.

Let me echo my thanks, too, Paula. I often come up with a useful idea when reading insights from my talented fellow authors, and today is no exception. I'm looking forward to seeing everyone at Malice Domestic in 3ish weeks!

Congratulations to all the nominees. You each are in excellent company.

Wonderful blog! Thanks for giving us the opportunity to hear from these great short story writers.

Congratulations to all the nominees! What a wonderful group of writers and what an intriguing and eclectic mix of stories. Short stories are such fun. Chocolate for the readers soul and eyes.

Thank you, Paula, for putting together this wonderful blog each year. It's great to see the thought processes that go into the nominated short stories. I love the form. Bonnie, Art, Barb, Edith, and Gretchen, you have made the voting very tough this year! Looking forward to seeing you at Malice.

I can't wait to read the ones I haven't read! Lovely interview, Paula. Good luck at Malice everyone!

Great blog, Congratulations to all the nominees, and I hope I can read every one of your stories.