Scribbler to Scrivener by Shari Randall 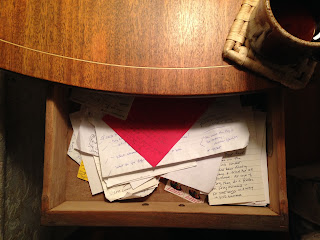 Emily Dickinson wrote poems on scraps of paper, the backs of envelopes, anything that she had at hand to capture ideas that could appear and disappear like a slant of light on a winter afternoon. Most writers carry a notebook in order to capture potential plot points, dialogue, and other ideas, but sometimes the notebook can’t be found. Then we make do with whatever is handy.

Or at least I do. I have a drawer of scribbles on napkins, envelopes, and credit card receipts, each covered with an occasionally legible plot point, snippet of dialogue, or other idea for my works in progress.

The Emily Dickinson method was fine when I was working on my own time, on my own for-fun writing. But now that I have an editor waiting for a publishable manuscript in seven short months, I thought it was time to give myself a present, a present that promises to boost my productivity. I bought Scrivener, a writing program that many authors use. The Scrivener website touts itself as “a powerful content-generation tool for writers that allows you to concentrate on composing and structuring long and difficult documents.” Scrivener’s “focus is on helping you get to the end of that awkward first draft.”

I bought Scrivener because I don’t want to be a scribbler anymore. I’ve scribbled notes on any handy piece of paper – the blank borders on newspapers, various notebooks, envelopes, junk mail. My forgetfulness (where did I put that notebook?) has conspired with my New England thriftiness (Don’t throw out that Christmas letter! I can outline on the back!) to create a disorganized monster. The time had come to corral my notes and scribbles and herd them into Scrivener.

So how is Scrivener working out? Downloading the program was simple. Tip Number One: Read the directions for downloading. They are not kidding.

The first steps were so simple I figured I’d be breezing through dozens of scenes in no time.

I opened the program and felt like an eight-year-old who had traded a skateboard for a Ferrari.

Did I mention that the digital user’s manual is 580 pages long?

Thank goodness there are Youtube tutorials for Scrivener. One of my favorites is by Karen Prince, who opens her tutorial “Scrivener: A Quick Review of How It Works and Some of its Coolest Features” by promising to show me how Scrivener works. How does it work? “Like magic,” Ms. Prince promises. Her clear description of steps and her wonderful plummy accent make watching the video a treat.

It’s only been two days, but I have a wonderful sense of possibility. All of my scribbles and the notes from my phone have been transferred to Scrivener. Everything is in one place. That I won’t lose that plot twist that came to me at 3 a.m. and I scrawled onto the back of an envelope with an eyebrow pencil is very comforting.

Many writers have sung Scrivener’s praises. Writers with series characters to juggle seem most pleased with the program’s many features. I’m still learning what those features are and I promise to fill you in. Just as soon as I find my notes.

Will it make an organized author out of me? Stay tuned.

Do you use Scrivener? Do you have any hints for new Scrivener users?

I use Scrivener; it allows me to be marginally more organized. I write in scenes and one of the things I like the best is the ability to move scenes around with my mouse. I can also see at a glance the pattern of the multiple POVs. And I enjoy its ability to generate an outline when I provide a synopsis for each scene.

Lots of other tools as well, which I use with good effect.

Some swear by Scrivener for everything. I do my final editing in Word because I use styles for my formatting.

I've heard a lot about Scrivener, Shari. I'd love a report on it. How is it different than Word? Does it convert to Word for submissions? What features does it have that make it a better product? Okay, we'll wait for your report. Perhaps it's just what I need.

Please keep us posted on your progress, Shari.

I've looked at Scrivener, but I have such trouble with all things computer, and can't make Word do what I need it to without a major hassle. And now my old computer "is no longer supported," so I anticipate increasing problems with that.

I do have a "new" laptop, but that works differently from the desktop, and while I have made myself cheat sheets on how to do some things,I haven't attempted much else. The whole process is daunting.

I've used Scrivener since it became available for Windows. I love it, but I confess, most of its features are mysteries to me. I use it for first drafts, always complete the synopsis cards so I have a running outline, code my povs, etc. Once the first draft is done, I do a complete read through, see if any scenes need to be moved and compile to word. In the early days, you couldn't put your document back from Word to Scrivener without manually breaking the chapters. I think you can do that now and you could always do it in Mac, so I may need to look into that feature if a book needs an extensive re-work. At any rate, once my first draft is done, the rest of my editing is currently done in Word.

To answer Elaine, yes, it will export to Word, also to a number of other files including Mobi, but I have never used that feature either.

I think you will love it, Shari. And like most Scrivener users, you'll quickly figure out what works for you in the program become addicted.

Shari, I'm a note scribbler, too. But when starting a book although I don't outline, I do write down different characters and a general plot plan. As for Scrivener, like KM, it has taken me enough time to get comfortable with Word and even with that I sometimes have problems with it since I'm not terribly tech savvy so I doubt that I'll take on Scrivener anytime soon.

Hi Jim, it's encouraging to hear from others that they like Scrivener and find it useful. It's usually those of us who write in scenes. Non-linear types, unite!

Hi Elaine, I will keep everyone posted. The ability to keep track of and move scenes around is what attracted me to Scrivener. I've had to restructure timelines in Word and it was a pain. I hope Scrivener will make life easier. Many authors have sung its praises, so I figured it was time to dive in.

Hi KM, I hear you on computers. Scrivener's video tutorials have been very good. Try watching a few and see what you think. I haven't found anything comparable for using Word.

Hi Kait, I know what you mean about Scrivener - I don't think I'll get much more than an inch deep into what it can do, but for now I like it. The synopsis cards and ability to move chunks of manuscript are the reasons I took the plunge. So far the only thing I don't like is what they call chunks of text - "scrivenings" - ugh.

Hi Gloria,
I know what you mean about computers, Gloria. They are supposed to make things easier, but it takes a whole lot of effort to get to that point. And then there's a new computer program to learn….

Hi Shari,
I've been using Scrivener for several years and still don't know how to use all its features. A couple of things I like are being able to keep up with characters. The character sketches are right there on the left. With the latest revision you can access your research from the internet without having an internet connection. With Word I would need numerous folders to keep up with everything. Scrivener makes it so much easier. Good luck with your journey.

I've used Scrivener for several years and I love it. Like Jim, I love the fact that it is so easy to rearrange scenes. I also like to color code my scenes (first draft, revising, needs more work, etc.). It helps me see at a glance how much I've done or how much I have left to do. I haven't tapped all of Scrivener's features, but the ones I use make my writing life so much easier.

Looking forward to your further adventures!

Shari, I'm so glad that you are chronicling your experience for us. Like others, I've heard about Scrivener, but have not used it. I look forward to learning your evaluation. Best wishes on your wonderful project!

You inspired me to download Scrivener, then, of course, I got overwhelmed by the instructions!! Will try again. Keep us posted.

Shari-Thanks for posting this and sharing your adventures with Scrivener. I have been thinking about getting it for a few months and maybe this is just the push I needed. Thanks, also, to the rest of you for sharing your experiences and thoughts on Scrivener V Word (or should I say Scrivener + Word?)
Debi Huff

Hi Mary, Thank you. I am so glad you posted. I had known about the character sketch options! Today has been a tutorial in Scrivener.

Hi Julie, I love that you color code scenes to track your progress. Totally stealing that! Thank you!

Hi Paula, I am learning so much from the comments today. I hope I will be able to report lots of progress in the near future.

Hi Carla, It is overwhelming, right? I think we'll get there - eventually.

Hi Debi - I think you have it exactly right - Scrivener PLUS Word. Word isn't going anywhere. Thank you for posting!

I, too, am a Scrivener fan. Gwen Hernandez offers a powerful class on getting the best from Scrivener. She's also author of Scrivener for Dummies. I recommend both. P.S. The "Prove you're not a robot" images are not friendly to the visually impaired.

I like to switch back and forth between writing on my iPad and my laptop but I don't think Scrivener has a version for iPad so it would limit me to using only my laptop. :( Not sure I want to invest in that case.

I helped to edit a new book called Scrivener Superpowers which is currently available as an ebook only. It was published with The Write Practice and written by Matt Herrin. Here is a review from a pantser you may find helpful: This is the best instructional manual for Scrivener I've encountered anywhere - and lest that sound boring or dry, let me emphasize that it is not.

This is extremely readable, entertaining, and deeply helpful for any writer who wants to take their tool-usage to the next level. I highly recommend this book. HIGHLY.

I received this manuscript as a pre-publication beta-reader, and I'm deeply glad I did. Fellow writers: get this book. Even if you think Scrivener is not for you, this book will change your mind.
Beth Schmelzer, new Guppie in 2015

I typed Matt's name incorrectly. It is Herron.