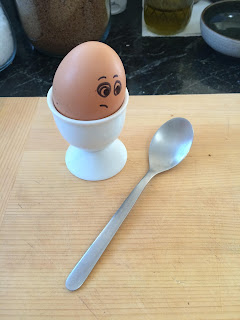 My wife, Judy and I moved to Portland, Oregon on Christmas day. The flight was not full and the fare

was much cheaper than for other days around that date. Since then I have been moving my electronic

addresses and finances.  I have also been starting my new connections such as at the bank and the

library. Separating from friends and my writing life is harder. Finding new friends and a new writing

people would arrive on January 6. Next when the truck was three days late, the moving company staff

members told us the truck should arrive on the 18th.  On the 13th, we got a call saying the driver

assigned to pick up our load found that his cargo was already overweight. He left our things in the

We have minimal possessions here, expecting the major shipment to follow us closely. I have three

pairs of boxers.  We have three spoons. I suppose if I were more philosophical I might be more

sanguine about it. Ah, for the simple life. But I want my stuff. I want to have comfort in my condo. I

want to have my keyboard, even if I just plunk out tunes one note at a time. I want my computer with

the record of my submissions and publications

I don’t want to wash dishes and do laundry every other day.

The remodelers are also not finished but they have almost completed their work. I’m more relaxed

about them. I like the workers. What they have completed has been very well done. I might feel the

same about the movers if they had brought almost everything.

I want more than three spoons.
Posted by Warren Bull at 12:00 AM

Oh Warren, how sad and funny at the same time! We went through something similar a few years ago when we moved from Miami to Maine. The date the mover gave us meant we needed to complete the drive in three days (pretty sad when you're traveling over so much country you'd love to explore). One the day of arrival, no one showed. We called the mover and discovered our stuff was deposited into temporary storage as the driver who does New England was on vacation--for three more weeks. We decided to make the best of it (not much else to do) bought the barest necessities and were grateful that we'd thought at the last minute to stuff our sleeping bags into the car. Did I mention we moved in November...to the crown of Maine...

Moving is always an adventure, full of unexpected happenings. Some of them are welcome, but some are a royal pain in the you-know-where.

I hope this move works out well for you, and you find that writing community.

In a few months (or years) this will be an amusing story. But for now, I imagine you just want your stuff.

I have no doubt you will find a strong writing community there. And maybe they'll even share their spoons.

When we moved from Atlanta to Cincinnati, we lived with only beds, a kitchen table and chairs, television, loveseat, and computer desk for four months. It was an eerie and zen-like experience. And the last time the basement was clean and empty. Give yourself time. Explore. Wander. Strike up conversations. My focus was our high school freshman, who, in time, made the transition.

OH Warren! How frustrating. Hope you can find all the good things about the situation. Enjoy your new home.

Oh Warren, I feel your pain! Being a military wife, we've moved more times than I'd like to remember. So I am not jealous of that part of your experience at all! But being in Portland - that's cool! I hope you are getting out of the house, seeing the sights, and meeting the writing tribe.

I was looking around the other day thinking that maybe if I moved I could get rid of all this accumulated junk. Having read your story, maybe it isn't such a good idea. Hope you like the movers when you finally meet them.


When I moved into the old farmhouse I'd bought 25 years ago, my son and I were in the midst of remodeling, and I had no kitchen cupboard or sink. The cupboards were still in boxes in the middle of the living room. There was no trim around the walls or windows and only the drywall my son had installed after we took out all the old plaster and took it down to the 2x4s so he could replace the 1917 wiring and add insulation. Withing a month, I think, it was looking much better and I had new kitchen counters with a new sink and cupboards. My cousin's husband even bought a new kitchen window that was nicer and installed it. I had a lot of help getting my house in order from new wiring, new walls, sanded and refinished hardwood floors as well as the new kitchen and eventually all the trim and a library full of book shelves. One of my cousins came over and helped me with the painting and wall papering, too. A lot of work, love and memories went into making my old house livable and comfortable.

Soon you will be settled in quite well and love everything about your new home, and what's not to love if you live in a town that has Powell's?

Oh what a funny/frustrating story! Good luck in your new endeavors. I know you'll find a writing community there soon!