In the quirky, close-knit town of Dixie, party planner Liv McKay has a knack for throwing Southern-style soirées, from diamonds-and-denim to black tie affairs — and her best friend Di Souther mixes a mean daiquiri. While planning a Moonshine and Magnolias bash for a couple of high maintenance clients, Liv inconveniently discovers a corpse in the freezer and turns her attention from fabulous fêtes to finding a murderer. Together, Liv and Di follow a trail of sinister secrets in their sweet little town that leads them from drug smugglers to a Civil War battlefield, and just when they think they’re whistling Dixie, Liv and Di will find themselves squarely in the crosshairs of the least likely killer of all…
http://vickiefee.com

Years of working as a reporter in small Southern towns has given Vicki Fee terrific fodder for a humorous and entertaining mystery series. Her "Liv and Di in Dixie" mystery series is filled with quirky characters, lots of references to mouth-watering food, and parties with unusual, or what some might call strange, themes. In Vickie's books, when you attend a party, there's no guarantee that you'll be around for the final toast.

It gives me a great deal of pleasure to welcome Vickie Fee to Writers Who Kill and to hear about the publication of her first book.

In Death Crashes the Party, you give readers a strong sense of place. Your choice of words, family/friend relationships, character names, and food descriptions make Dixie, Tennessee, and the South come alive. Was it a challenge making it sound real?

No, because it is real to me! While Dixie is fictional and not patterned after a particular town, it is very much informed by my experiences growing up in the South, and especially working many years as a reporter in small Southern towns.

Liv McKay’s business is planning parties for some unusual and sometimes demanding clients. You’ve written so knowledgeably about it. Do you have experience or interest in planning parties or this type of business?

With my background as a newspaper reporter, research comes naturally to me and most of the information for the book was gathered from the Internet. However, planning large-scale events is something I have a teensy bit of experience with. Over the years as a reporter in small towns I was often included on community-wide event committees as the “publicity” person, since they depended heavily on the newspaper in that regard. Sitting in on these meetings, I was also privy to the other elements of planning the events. Plus my husband was president of our local Jaycees chapter, which held some large community events, including an annual haunted house fund-raiser that drew hundreds of people. I had a behind-the-scenes look at what it takes to make an event like that happen, including some of the technical stuff like event insurance.

You injected nice bits of humor in your writing. How do you keep your treatment of an unusual or strange character respectful and not appear to be making fun of that character?

I love these characters, quirks and all. While none are based on a specific person, they are authentic to the kinds of people that populate small towns — and even our own families in some cases! I feel very protective of them.

You’ve gone from living in Memphis to the Upper Peninsula of Michigan. That’s quite a change for a Southern girl. Besides having to add sugar to the ice tea you are served, what has been the biggest adjustment you’ve had to make? Are you losing your Southern accent?

I think I’m too old to lose my accent at this point, although I don’t say y’all as much as I used to. I’ve actually caught myself saying “eh,” which is a Yooper as well as a Canadian thing. I can’t say it with much authority though.

How did your career as a newspaper reporter, covering small Southern towns, prepare you to write fiction?

Working as a reporter was a great training ground — being observant, digging up background information, writing tight, making deadlines. Not to mention all the inspiration I absorbed for characters and setting. 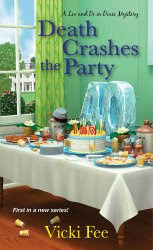 What writers have influenced you the most?

Well, you can’t be a mystery writer and not mention Agatha Christie. I discovered Miss Marple when I was about 12. But even before Christie, children’s author Mary C. Jane captured my imagination with Mystery on the Nine-Mile Marsh. It was the only one of her books available in our little school library and I checked it out so many times the librarian finally told me I couldn’t check it out again. (I was forced to get friends to check it out for me.)

As far as Southern cozy mystery writers, I think my biggest inspiration is the late Anne George and her Southern Sisters series.

What was the best piece of writing advice you’ve received along the way?

Jack London said something to the effect “Don’t wait for inspiration, go after it with a club.” I’ve found it to be true that I can’t finish a book if I only write when I feel inspired. But, if I’ve got my hands on the keyboard sometimes inspiration strikes.

Food plays an important role not only in Liv’s career but also in her life in general. Why is that?

The short answer is because she’s Southern! Gatherings in the South typically revolve around food. And in a small town like Dixie, the Town Square Diner and Taco Belles would be social hangouts.

The food your described in your book sounded wonderful. But I have to ask, what is crawfish cornbread?

It’s basically cornbread with crawfish, onions and cheese added — and jalapeno peppers if you like it spicy. It’s also gluten free, which is important at our house because my husband is gluten intolerant.

In the "Liv and Di in Dixie" series, why did you choose to have your main character, Liv, married from the outset?

I knew Di would have romantic feelings and complications with Sheriff Dave, so I wanted Liv to be in a stable relationship. Plus, as a married woman, I believe relationships between spouses offer plenty of opportunities for sweetness and sizzle—as well as some drama. There will also be some romantic subplots with other characters, including Liv and Di dabbling in a bit of matchmaking in Book 2.

Tell us about your journey to publication. Was it a bumpy ride?

The journey for this book was a sweet ride. I felt confident about the finished manuscript, honed my query letters and carefully researched agents. I queried twelve agents and received three requests for manuscripts. From those I got an offer of representation from one of my top-choice agents. Within three months of signing with her, I had an offer from Kensington.

I have to add, however, that this fairytale was preceded by about fifteen years of painful forays into fiction, including two really bad manuscripts I shopped around without success—or even much encouragement—and an impressive pile of rejection letters and buckets of tears.

What has been the best thing you’ve experienced since learning that Death Crashes the Party was going to be published?

There have been so many exciting milestones. But I guess I’d have to say getting my first book signing on the calendar. That’s just such a quintessentially “published author” moment.

Describe your favorite place to write. Not necessarily your most productive spot.

Since I have a habit of scribbling things down on bits of paper, the computer armoire in my home office gives me a spot to stack those. And I have a pretty nice view out the window of Marquette Mountain and a peek-through view to Lake Superior.

What’s next for Liv and Di? I hope we’ll see more of them.

Thanks, Grace. And thanks for having me on the blog.

It’s Your Party, Die If You Want To, the second entry in the Liv and Di in Dixie series, will be released in Oct. 2016. And the story is set at Halloween, so it should be a lot of fun.

Next up, Liv has her hands full planning a murder mystery dinner for charity and babysitting a demanding celebrity ghost hunter when she and some other ladies stumble across a dead body in a cemetery. There are plenty of people who may have wanted this party girl with a penchant for married men planted six feet under. Liv and Di encounter the unexpected and stir up plenty of drama as they set about trapping a killer.

Thank you, Vickie, for joining us at Writers Who Kill.

To learn more about Vickie Fee and the "Liv and Di in Dixie Mysteries," visit her at www.Vickiefee.com.

Nice interview. Liked what you said about feeling protective of your characters. We all feel that way, don't we?

Welcome to WWK, Vickie, and best of luck with your series.

Love your cover, Vicki, and your concept and play on words. I loved Anne George, too!

I enjoyed reading your interview, Vickie. It was entertaining and I could relate to several things, including living in the south and moving to Michigan! Although we moved back to TN after about 7 years, and it was y-e-a-r-s ago. This sounds like a series I could get addicted to. Good luck!

Welcome to WWK, Vickie. Nice interview. I think your book is one I will really enjoy as well as those that follow it.

Lovely interview, Vickie. I wish you much success. Terrie Moran

Thanks for the well wishes, everyone. And thanks, Grace, for the interview!

Yes, Carla Damron, I think our characters are like our children. And some of them were a very difficult birth!

Thanks, E.B. Davis! Anne George was the best, wasn't she? I still miss her, but console myself by rereading the Southern Sisters series. Even after having read them multiple times, Mouse and Sister can still make me laugh.

Thank you Sylvia A. Nash! We just got back a couple of days ago from visiting family in Tennessee and I'm looking out my window right now watching the snow fall!

How in the world did a Memphis girl come move to Yooper-ville, eh? Yah, between the Finns and the Canucks, that's an entirely different world. Have you looked for agates in the frigid waters of Lake Superior? I did that once in July...just about froze my feet. Great interview, Vickie, and I love your characters.

Thanks so much Gloria Alden and Terrie Moran!

Hi, cj -- thanks for the kind words! I have not waded more than ankle deep into the waters of Lake Superior, but I enjoy looking at it out my window! The Finns and Canucks are kind and generous people. But the Finns can get testy when you mispronounce the word sauna. The first syllable rhymes with cow not saw, they insist. They even have T-shirts that say so :-)

Vickie, your books sound like so much fun! Thank you for stopping by WWK. Best wishes for much success with your series.

Thanks, Shari! I've enjoyed hanging out with you guys today :-)

Thanks for sharing. It sounds like a fun read.

Sounds like you've put your experiences and research productively to work! Sometimes it's pretty obvious when an author is fond of his/her characters, even the weird ones, and it makes for a much deeper story. I look forward to reading this!

Thanks, Warren! Thanks, KM!