Birthing a Book! by Carla Damron

I am about to give birth. Not to a child—but to my version of a child. My novel, The Stone Necklace, will be released later this month. I’ve written about this project before. It’s not a mystery novel, but a more literary endeavor, something I’ve worked on for several years. The “what if” exercise that began the project was this: What if a man who happens to be a hypochondriac actually has the heart attack he’s been dreading? What if this causes a car accident? What happens to all the people connected by that crash?

From this little exercise, characters emerged, took shape, and told me their stories. The man’s wife, Lena, is a breast cancer survivor. His fifteen-year-old daughter, Becca, struggles with a hidden eating disorder. A young mother is injured in the other vehicle. The ICU nurse has just returned from drug rehab. And a homeless guy, Joe, was the man’s quiet benefactor. Through the braided stories of these characters, The Stone Necklace is ultimately about the bumpy path of recovery. 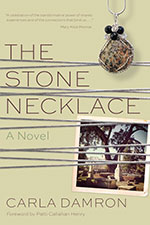 As the “birth” date approaches, I find myself feeling both excited and nervous. A few amazing things have happened; The Stone Necklace was selected to be the “One Book, One Community” read for Columbia, SC, where I live. An audio version has been recorded. The wonderful novelist Patti Callahan Henry wrote a Forward that is far better than I deserve.  The Editor-in-Chief for Story River Books, my publisher, is the phenomenal Pat Conroy.

Here’s what he wrote about the novel:

“Ms. Damron takes full ownership of Columbia in a way no writer ever has, capturing the flawed soul of the city and the weight of its past hanging albatross-like on the throat of the present, yet she also shows us the glimmering hope of redemption in the lives of its citizens if only they will stand together as one family, one community.” (I may have this text tattooed on my arm.)

I am blessed to have a publisher like Story River Books. Before they accepted the manuscript, they asked for several rewrites, pointing out story arcs that needed strengthening, scenes that could be deleted or merged, and other ways to tighten the novel. I had to be open to this feedback and willing to dive back in.  Each revision taught me something about my own writing. Each change deepened the narrative. I didn’t agree with every suggestion, but I embraced most of them because I trusted the readers and their input.

For me, this is the key to success in writing: LISTEN to what people tell you about your work. DON’T respond with defensiveness.  Writing is two-part communication. Part one: I put words on the page. Part two: the reader reads these words and “gets” what I’m saying. The only way to know if the second half is working is to listen to honest feedback from readers you trust (probably not a family member).

As you can probably tell, writing and honing this novel was the hardest thing I’ve ever done.  I hope readers love it, or at least, like it. I hope I’ve lived up to the faith Mr. Conroy and Story River Books have put in me.

But mostly, I hope The Stone Necklace gives its readers a glimpse into the power of recovery.  The process of writing is like the story itself: the journey can be so very hard, but it is definitely worth it in the end.

More info about the book HERE

So thrilling, Carla. Congratulations on the birth of the book, it sounds wonderful. Can't wait to read it.

"LISTEN to what people tell you about your work. DON’T respond with defensiveness. Writing is two-part communication. Part one: I put words on the page. Part two: the reader reads these words and “gets” what I’m saying." The best editing advice ever. This needs to go on every writer's memo board.

Carla – I am sure The Stone Necklace will be wonderful. Congratulations on its birth – if only novels could be brought forth fully formed after only a nine-month gestation.

Part Two is the tricky part, which is why having many beta readers is essential. Not everyone will "get" what you're saying, but if most people do, you know you've "got" it. Congratulations, Carla! I don't know how you are so productive with working full-time!

Exactly. Part two is the hard part, but so very important. And yes, Jim, a loonnnggg gestation period for this one!

Congratulations, Carla! I am looking forward to reading The Stone Necklace. And, wow, you could not wish for a better experience from your publisher and mentors. (Pat Conroy! I writhe in envy.)

There's a fine line between defending your work and being defensive. Very tricky, but as Elaine points out, beta readers are a great help here.

Congratulations, Carla. I'm looking forward to reading it. I've always read literary works in addition to mysteries. The two book clubs I belong to mostly choose literary books. This will probably be one I'll choose when it's my turn to host a book club meeting.

Carla, I am so excited for you and cannot wait to read your book. Keep us posted as your baby takes its first steps out into the world!

Looking forward to celebrating your success, my friend. It couldn't happen for a more deserving person. Many congratulations!

Loved your previous books and look forward to reading this one.

Carla, congrats. Miss the Inkplots and your honest feedback of my writing. Looking forward to purchasing your book...maybe you, Debbie and I can meet for lunch and you can autograph our copies. Peace and blessings, always. Machelle