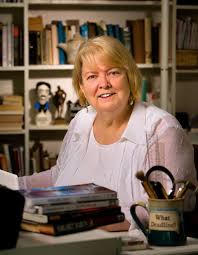 Sometime last spring I went back to reading Margaret Maron’s Judge Deborah Knott series all over. I’d read the first six or seven when she started publishing them and loved them from the beginning. When I started going to Malice nine years ago, I received a bag of books they give to all participants, and also bought books by new authors I discovered while attending. So my piles and piles of books kept multiplying as well as my interest in new authors I was reading; Louise Penny, Rhys Bowen, and many others. Added to that, I joined two book clubs after I retired so there were two additional books I felt compelled to read each month. Fortunately, I enjoyed most of them and was glad to not only read those, but to be introduced to other new authors.
As much as I love to read, I don’t have time to read for hours each day, and not because I’m a big TV watcher or Facebook fan. Like most people, I lead a very busy life, and my reading also includes the daily newspaper and Time Magazine. However, Margaret Maron’s books were still on my shelf and becoming more plentiful since I’d pick up new ones whenever I came across them or they appeared in the Mystery Guild Book Club I belong to. Since I wasn’t exactly sure where I’d left off, it seemed only reasonable to start at the beginning as I only remembered a few things, which didn’t include the plot, the murder or who done it with the earlier ones. Also, since I like to start a series at the beginning, I started with the Bootlegger’s Daughter, and fell in love with her writing all over again. I continued reading her books always with a few other books in between; book club choices, new authors to start, or other mystery authors like Elizabeth George, whose books have grown longer and longer with each new one she writes. Then there were the gift books I got for my birthday or books by authors interviewed on WWK. I just finished my 15th Judge Deborah Knott book this week. While I was waiting to fill in the gaps of books I didn’t have, I read the first three Sigrid Harold books that were Margaret Maron’s first series. I liked those, too.

When my Third Thursday book club met at my house before Christmas to go over the books we were going to choose for the following year. One of the three I suggested was Bootlegger’s Daughter. We chose it for January’s meeting which was last Thursday. Before we got started discussing the book, I asked them to write their opinion of the book and what they liked or didn’t like. As a group the only thing they didn’t like was the cover because they thought it didn’t relate to the book.  Following are their comments:

I’m all about characters. Maron introduces us to small town, believable folks complete with warts and beauty marks. I love that all the ends are tied up into a smooth strand, not a last minute knot. Best part – I guessed “who done it!” Linda Bailey

The setting and characters of this small town are refreshing and true to life. I could envision all of it. The interactions were truly representative of how people’s conduct is in a small town. Ann Cicero

Deborah is such a strong practical woman. Many or most of the characters seem to like and trust her allowing her to solve the secret of Janie’s death, as well as that of Michael’s and Denn’s. I was so glad that Deborah and her father seemed to be finding a kind of peace. Sue Johnson

The “cover” issue was a concern to me, because I often return to it as I’m reading the book to picture the scenes presented throughout. It only seemed to fit somewhat in the beginning. Otherwise it wasn’t related. It bothered me less than a third of the way through, but then Maron had me wanting to know what happens next, and what happened way before. I especially appreciated how well she acquaints the reader to the people and to the places. It reminded me of our little town, especially the specialness of so many of the people I met there and in our town. Even the description of the Dobb’s Ledger and the importance of the death and life of each person. The obits in the paper were not written as a list, but more as a person’s life story just like a home paper. I can hardly wait to get back and find out where she’s taking me. Jean Morningstar

While I realized that this is an older cover, I’m glad I didn’t have to judge the book by its cover. This older version seems to fit only the beginning of the book, not the spirit of it. I enjoyed the characters and their relationships. Another wonderful part was the vividness of the description of the photograph of Deborah’s parents. As a reader, I could see it as clearly as if it was in front of me. Carol Baker

Our group is not a large one, and we were missing a few at this past meeting because of weather or sickness, and another member goes to Florida for the winter. However, over the past nine plus years, with some members leaving and a few added, we have become a very tight group. We meet right before lunch at a restaurant to discuss the book, and then talk and laugh about a large variety of other topics. Some stay for lunch and others have to leave for appointments. We’re all retired and at least four of us were teachers and one is a retired librarian.  Almost all the members, except for me and one other, live in the small town we meet in. They in particular thought the small town characters were very believable. It’s rather rare that the comments about any book we choose are all positive. We have some members who almost always find something to criticize about a book, but for this book it was only the cover which few authors have a choice in the matter anyway.

What’s my opinion of the book? Well I wouldn’t have read it for the third time before we got together to discuss it if I didn’t love it. There isn’t much I could add to their comments, except that while continuing the series, more and more I feel I know the people and the area where Deborah Knott lives. A common comment writers hear is to write what you know.  Because Maron has lived in the area she writes about much of her life is one of the reasons it seems so real. I only hope Margaret Maron keeps on writing her Deborah Knott series because I’m not ready to quit reading them.

Have you read Margaret Maron’s Deborah Knott series?
What other series have you been hooked on?

I have not read any Margaret Maron. I continue to read a number of series: John Sandford’s Davenport series; Michael Connoly’s Harry Bosh & Mickey Haller; John Lescroart’s Dismas Hardy are four that immediately come to mind.

Jim, those are series I haven't read. It's good to find a series with characters that become so familiar to you that you feel they are people you actually know.

Multiple points of view, shifts between past and present, Maron does it so well in Long Upon the Land. I'll have to read all her books, in order.

My go-to cozy series: Cleo Coyle's Coffeehouse mysteries. Her latest is a cozy thriller set in Washington DC. It's a lark, a romp, with very interesting factoids about jazz and excellent recipes.

So many new authors to try!

Finding a "new" author is wonderful. I remember the snowy winter I discovered Dick Francis. And lived within walking distance of the library. It got me through many a snowed-in evening quite happily.

Margaret, I haven't heard of her series. I wrote it down to check it out.

KM, I loved Dick Francis's books partly because I've always loved horses, but it was more than that. He was an excellent writer, too. At one time I had all of his books. I'm a big fan of your Jesse Damron series, too, and can't wait for another one to come out.

I, too, am hooked on Margaret Maron, especially Deborah Knott. So rich! I did enjoy the earlier Sigrid books as well. I get very testy when I run out of books in a series. I guess for TV watchers this is comparable to having to watch reruns. Other fave authors. Susan Hill (Simon Serrailier), Anne Cleves (Shetland Island and Vera Stanwick), Louise Penny (Gamache) Dona Leon (Guido Brunetti) Martin Walker (BRuno chief of police)I wish that Bryan Gruley would come up with a sequel. Love John Lescroart(Dismas Hardy et all.

I haven't read any of Margaret's books, so I will look forward to them happily!
My husband and I have gotten hooked on William Kent Krueger this winter. Not my usual cup of tea, but he is a masterful storyteller. (WKK, not my hubby)

Sue Grafton practically lures you in with her alphabet series. I had Ann Perry's entire Monk series until I moved. I have Sharon McCrumb's series with Nora Bonesteel. I've only read a few of Margaret's book, but I enjoyed them.

Sarah, you have introduced me to some new series to try out. I've heard of Ann Cleeves, but haven't read anything by her yet. And of course, what'e not to love about Louise Penny's series.

Shari, I think you'll like her. I'll have to try William Kent Krueger. I've not heard of him before, or if I have, I've forgotten.

Warren, I loved Sharon McCrumb's series with Nora Bonesteel. I don't think she's writing anymore. At least I haven't seen anything by her in the Mystery Guild Book club monthly
bulletin I receive. I know my book club loved one of her books that I recommended some
years ago.

Love, Love, Love the Knott books, and I am devastated (as a reader) that the series is coming to an end. As a writer, I understand Maron's need to end it. I have read much of the series, but not all. I think it's time to remedy that with a mini-marathon of my own!

Kait, I'd heard that she was quitting, too, but I hope she at least starts another series, which I'm sure I'll enjoy, too. Katherine Hall Page is still writing her series, and I think she has more than 18 in her series, but I'm not sure. I don't have all of her books.

Martha, there are so many good series out there, aren't there. I wish I had the time to spend hours every day reading.

I've been working my way through a stack of books and I'm at Margaret Maron's Long upon the Land. It's strange that I don't remember reading her books before. I bought this one at a conference last year. Her point of view shifts at the beginning were a little disorienting, but her writing pulled me through till I was comfortable with what was going on. I've promised myself that I'm going to read Agatha Christie's books again. I have them all even though some are very old now because I started collecting them with my mother in 1967. I did read a huge number of Charles Todd's books last year interspersed with Louise Penny. M Stojak

Mary, I think if you start with Margaret Maron's first book and work your way through, you'll be more comfortable with the POV shifts. I have a whole long shelf of Agatha Christie books, too, but now where near the 80 or so she wrote. I plan on reading hers again, too, but not until I get caught up with other books I have.