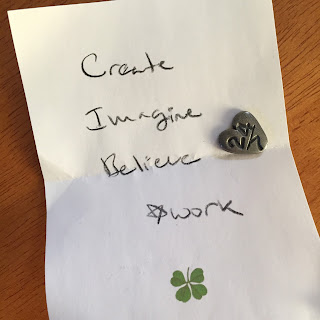 I said goodbye to 2015 by staying up to 9:30 (I'm such a wild child) reading a few pages of Lauren Groff's amazing Fates and Furies. I said hello to the new year by attending what was basically a moving meditation—high-intensity interval training with mantras thrown in—at a friend's studio. At the end of 75 minutes, sweat dripping down our faces, we were asked to write down three words we wanted to focus on in the new year.

My words for 2016 are above: create, imagine, believe.

Oh, and there's "work" with an asterisk because all of the things I want take work and nothing less and I felt that part needed to be documented too. We were told to put that little sheet and a 24/7 token into our wallets as a tangible reminder of what kind of energy we're putting forth in the new year.

I absolutely love this idea. I love the thought of focusing on single words rather than specific goals. Mostly, because many of my goals take other people to solve them and it's not fair to myself to make a resolution that revolves around others' actions. I'm in control of myself and nothing else—a hard thing to remember sometimes...especially after the 2015 I experienced.

2015 was a year of change of me. I said goodbye to my younger and only sister at the end of 2014. I lost my grandmother three weeks into 2015. While I was on bereavement leave for my grandma's funeral, some jerk blasting through an unprotected left turn totaled my car. I was fine, but when the tow truck driver came, I broke down and started crying. I really felt like I'd hit a major low. Personally, professionally, and now literally, I felt like I wasn't going anywhere.

Everything after that has been amazing. I'm on an uphill climb out of that valley and I'm up so high now that when I look back on 2015, it doesn't feel like it was a bad year at all. Even though it began with such loss, it was actually a dream year.

But with new adventures bring change. I'm on a different path than I was even a year ago and I need to respect that. And I need to make space for others who desire to bring change to their own lives. Therefore, I've decided to leave the WWK.

I am very conscious of what a wonderful resource the WWK is for mystery writers. It's a wonderful community both within the readership and the blog internally and I want to make sure I'm not filling a spot that someone else can use. My book deal is for YA fantasy, not for the mysteries I have locked in Dropbox, and it feels selfish of me to squat on a space on this wonderful platform when someone else currently writing mystery could benefit on so many levels from joining.

I will be back often to say hello to the WWK in the comments and keep up with the mystery community—my first love. The words in this space are always inspiring, thought provoking and interesting. I couldn't imagine my life without them. I'm very grateful to have been a member of the WWK for so long and I really enjoy each and every one of the writers and readers.

What a turbulent year you've had, Sarah. Extremes scare me, and yet what choice do we have but to hang onto the ride? I admire your courage and dedication to your goals. It's been hard work, and you've achieved success. Thanks for blogging with us. I enjoyed hearing about your life and your process. May our paths cross again!

I'm sorry to see you leave as my Sunday blogging "partner," but I appreciate your need to focus on creating, imagining and believing in your YA writing and giving it all your energy.

Best of luck, Sarah. I'll be rooting for you from afar.

Thank you, E.B. and Jim! I really appreciate being a part of this community! I look forward to keeping up with the WWK!

Sorry to see you leave, Sarah, but I'm happy for your progress.

Sometimes it seems like disasters in life come in bunches, and that the good things do the same. I hope you continue on this wonderful route, and wish you all the best.

We will miss you!

Sarah, thanks for being a true inspiration. Best wishes on all your endeavors. Please come back often and know you'll always be welcome. I'm so excited about your new YA book and hope you'll come to the YA'LL festival in Charleston, SC, to promote it. I look forward to meeting you in person there!

Sarah, we will really miss you, but I can understand all too well how much time blogging takes. It's amazing that you've done such a good job of it while working full time, writing and taking care of two little ones. So glad to hear you got your book accepted. Stop by and let us know when it's out.