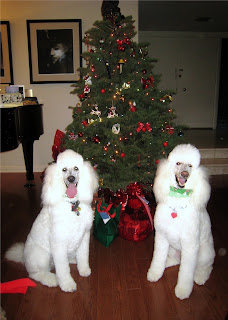 I once heard what you do on New Year’s Day will reflect your fate for the following year.  That the first person to enter your home after the stroke of midnight will forecast the type of luck you’ll have, which may have something to do with why lovers kiss at midnight and friends gather together to bring in the New Year. For me, however, this year’s celebration is difficult, and I’ve rocks in my stomach as the new year approaches.
In December, I lost Cosette, one of my two standard poodles. For years, Cosette and Eponine, named for the two little girls in Les Miz, after all, they are French Poodles, have been my training wheels. They’ve balanced me. We’d go for our daily walks, and they’d sit in my office while I wrote. Occasionally, when I’d read my work aloud, one would look up, as though what I’d written had some sense of brilliance about it, then yawn and fall back into a gentle snooze.  Cozy and Eppy were my support, my peanut gallery, and in many, many ways my best friends.
A writer needs friends like these. The demands of unfinished manuscripts frequently rob them of social engagements, missed phone calls with friends, and meals with family.  I am no different, except they were always there for me.  Chasing away my self-doubt, replacing the empty energy in my room with their constant presence, and occasional outburst when the postman would arrive.  But for everything, there is a season. Like the song, “Turn! Turn! Turn!” says, a time to every purpose under heaven.  And, as the year winds down I’m faced with the unhappy news that Eppy will soon join Cozy in a world I can only describe as an energy that I know surrounds me. 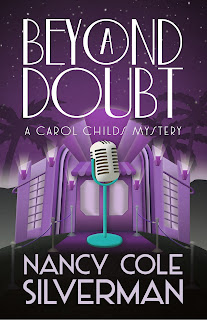 I felt that energy very strongly when the time came to visit the vet for the last time with Cozy and say goodbye.  I placed one hand gently on her heart and another on her head as she passed, and I felt her energy leave her body. The vet didn’t have to tell me she was gone.  I could feel her go and while there have been moments of sadness since, I know she is still with me. She has simply left her aged and pained body and now surrounds me in another form.
I tend to think of it like I do radio waves. Odd in that I spent twenty-five years in radio, and I find most of what I do or think about somehow relates to radio.  I still use it as the setting for my series with Henery Press today, and I can’t help but think that radio waves, that invisible frequency that man didn’t know much about until the mid-1800’s, has always been with us and always will. And because of that, I wonder, what other forms of energy surround us? What other dimensions can’t we see or hear, but only through faith, accept? 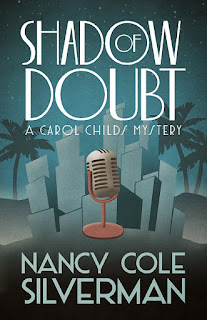 I’m comfortable with that idea. And, as I write this, Eppy sits on my red couch.  Her health is failing, and I know that as the new year comes, so will change. Like I said, I’ve rocks in my stomach. The road I must cross is bumpy, but I’m thankful for the gifts they gave me and the times we’ve shared.  So this New Year’s Eve, I’ll keep them both in my heart and in doing so, know that they will both be with me in the new year. Like those invisible radio waves, they surround me and are with me always.
Nancy Cole Silverman says she has to credit her twenty-five years in radio for helping her to develop an ear for storytelling. In 2001 Silverman retired from news and copywriting to write fiction fulltime. In 2014, Silverman signed with Henery Press for her new mystery series, The Carol Childs’ Mysteries. The first of the series, Shadow of Doubt, debuted in December 2014 and the second, Beyond a Doubt, debuted July 2015. Coming soon, in 2016, is the third in the series, Without A Doubt. For more information visit www.nancycolesilverman.com 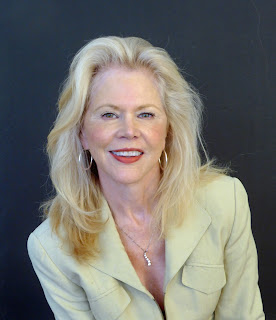 Welcome to WWK, Nancy. It’s hard to say goodbye to your animal companions, but they stay with us as long as we remember them. I wish for you a great 2016.

We lost our big black standard poodle Toby in June, age 15. It was his time. He was what my mother called "a character and a half." We'll never have another dog like him. The Toby stories! He was a regular on the soccer and cross-country circuits, the "comfort dog" when things didn't go well.

Fast forward five months, when I was walking Boo, our nine year old standard, thinking dark thoughts about the end of fall and winter, and an empty dog bed in the kitchen. I made some phone calls and in less than a week, we'd found Jazz, a four month old female standard full of sass and moxie. She's got the adolescent eye roll perfected, and spends hours digging up hickory nuts the squirrels have buried.

Losing our beloved pets is sad. We have an expected life span of about 80 years--unfortunately, our most common companion animals, cats and dogs, seldom make it to 20. For those of us who value having pets and get new ones, that translates into a lot of sadness (and a lot of joy, when a new animal enters our lives.)

My husband and I find ourselves in the position of getting a new "pet" for the lonesome one left behind, leading to an array of rescued animals, from a rat terrier named Queenie (undoubtedly after Truman Capote's childhood rat terrier) to an English mastiff named Xena, and through a bevy that's included a Hungarian Puli and any number of who-knows-what. We currently have a rescued labradoodle and a dog that, except for having floppy instead of erect ears, resembles a Finnish Spitz, including the distinctive reddish color. Vinnie comes from a prison program.

Nancy, a little over five years ago, I had to put down my beloved golden collie. Molly wasn't quite five years old when she developed grand mal seizures which left her hind quarters paralyzed. I had her from the time she was six weeks old, and I cried as I got down on the floor next to her at the vet's office, and as they injected her with what would put her permanently asleep, I sang our special song to her "You Are My Sunshine" as she licked the tears from my cheek.

I wasn't in a hurry to get another dog, but three months later my daughter located a tri-color
collie for me. Maggie was 18 months old, and it wasn't long before I totally fell in love with her. There personalities are different except for the fact that both were/are loving and gentle. Neither one would harm anybody or anything. Maggie and I walk every morning in the woods weather permitting just as Molly and I did, and both share/shared my home with me and my two cats.