WHAT NOT TO BLOG ABOUT 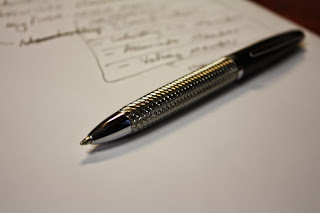 WHAT NOT TO BLOG ABOUT
Blogging is sort of like acting or singing in public.  It gives you the opportunity to make a fool of yourself in front of an audience.  And it is tempting at times.  I was recently informed that asking politely when assistance we had requested from  (government department name withheld) might actually happen, would probably move our names from wherever they are to the bottom of the waiting list.  I don’t know if that is true but we were advised by (another name withheld) who really should know.  I don’t think it would be wise to write specifics about that in a blog.

Some interesting interactions I’ve had with members of the mystery writing community would make fascinating reading, but I would be talking about things that would be recognizable to the people involved.  Changing names to protect the innocent wouldn’t be enough.  Another blog bites the dust.

And there was the time when (name withheld; action deleted.) I know (name withheld) reads blogs regularly.  And (name not mentioned) has occasionally commented on what I have blogged about.   It was amusing and maybe it gives a tiny insight into the thinking of whomever I might be talking about.  But you’re not going to read it here.

You might think one of my family members would engage in behavior that would result in a blog-worthy event.  You’d be wrong.  No one in my family ever (I’m not saying, you didn’t hear it from me or you must be kidding.)  Not even one person, nope.

I have advised writers setting up blogs that they should regard anything they put in their blog is equivalent to having it tattooed on their forehead.  Of course, you don’t want to write anything as bland as pabulum either.

There have been a few times when I gave myself sufficient time to cool down before writing about something that had steam coming out of my ears.  Other times I have decided to share local news and events that I thought would be of general interest.

At times, however, it’s been enough of a challenge to find a topic that I end up writing about what I don’t write about.

What don’t you write about?
Posted by Warren Bull at 12:00 AM

There are times when I feel like blogging. I could write a ton about the Outer Banks, shells, champagne--all topics of the book I'm now querying, but then I'd also have to write about angels and demons. Most people would think I'm crazy. I would probably end up grousing about D. C. traffic, rude people, and bad weather--boring!

Most of the time, I have to admit--I'd rather interview authors about their books, which is what I do, because that is the focus of the blog. How everyone else comes up with great topics every week is beyond me. My hat is off to each of you!

One should recognize that anything that you post on the internet will be available FOREVER.

However, if we shied away from all controversy, what a sad world this would be. Change comes from taking risks. (But refer to paragraph 1 before posting.)

Warren, good blog. I only write about deceased family members and never about any of my living family and friends. And, of course, those I write about is written with love for them. I also don't blog political rants, although I have strong political feelings for one party. I won't blog about religion, either, although it's a part of my life. Hopefully, none of my blogs are offensive to anyone.

Since my blog is about being a working mom, I do write about my daughter, husband and dogs, and the funny things my daughter says and does and what my dogs do. I try not to write anything mean about anybody; stories that might offend former places I lived in I don't share, even though some of them would make great stories, and I make sure I spend equal time poking fun at myself. I also stay away from partisan politics. I also never write any story about my daughter that I think would embarrass her if her friends somehow found it, so things like boys she talks about are not mentioned either.

Warren, you've hit the nail on the head. We have to be careful about what we blog about, and waiting until you've cooled down is such valuable advice. We've all seen people vent online and then it goes viral. Also, there is a very thin line between what may be interesting or boring--quite a challenge to a blogger.

It's difficult to blog about something meaningful yet not too personal. I tend to stay away from politics and religion. The only thing I publicly rant about is technology.

Kara, I join you in the technology rants!

You're right, Warren, a lot is off limits for blogs, or any other form of communication that is likely to offend people.

On the other hand, if we all always agreed about everything and never said a word about what bothers us, all the blogs would be pretty mundane.

A good post to remind us of the limits of blogging. Before I retired I advised my staff on emails, etc., with the same rule. If you think it would look bad on the front page of the local paper, don't write it. There is nothing private about the internet, emails, or any other social media. Of course, this means that we have to work harder to come up with something to write about. But we're writers. That's our job.

I agree with James above in that being too careful can and diplomatic can make you boring and stand-offish. Stating opinions or telling a story can always land you in hot water, but they're what people want to hear. It's about being careful and thoughtful, but not censoring yourself until you're fake.

I believe in writing hot (while the steam is coming out of your ears) then editing after you've cooled down. Waiting before posting a rant can help determine if you're portraying yourself poorly or are being relatable. And if you're trying to be at all informative, talking about bad experiences can be necessary.