I’ve Got A yellow Streak a Mile Wide…

“I may be wrong, but I suspect your problem is that you have a life. Do away with that. Like, adios to yoga and the gym, plus stop jogging, and Pinteresting, sky-diving, stamp-collecting and so on.”
—Calling Bullshit on a writer’s Top 10 excuses for Not Writing
Peter Mountford

“You just need to set aside time every day—eight to twelve, twelve to four, whatever—and write. You’d make more progress that way.”
—My wife

My dear Messrs. Thompson and Montford, and my dear, dear wife, allow me to tell you about the time I set aside yesterday to write. The previous afternoon I picked my daughter up from school, one which requires uniforms. She plopped into the seat and groaned—she’s a rather dramatic 14-year old. Don’t know where she gets it—“I really don’t want to dress up for dress-up day tomorrow.” 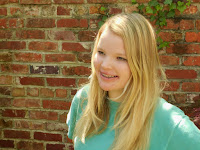 I replied, “Look at it this way, Nik, dress up one more time, and you never have to do it again.” She graduates from middle school in two weeks. Discussion over and forgotten.

This morning I popped the tab on an ice cold Diet Coke, cracked my knuckles, and placed my fingertips on the keyboard. Off to the races!

At 8:36 I received a phone call from the school. Nikki decided not to dress up after all and the principal told her to call me to bring her the proper uniform shirt. I did. She's sorry.

It’s exam week, so I told her I’d be back to pick her up at noon. She said, “No, twelve o’clock.” Damn, that private school education is paying off.

I return home and find the clothes I dried for an hour and forty minutes are indeed not dry. So I mash the buttons, as we do here in the South, again.

Before returning to the computer, I decided to go outside and link up Sparky, our sweet beagle mix rescue, to his lead since this morning I just let him out the door. I noticed his water bucket was filled with pollen and junk from the wind and rain we had last night. I dumped it and turned to head toward the hose.

I discovered as I'm falling face first into my rather large brick fire pit that Sparky has wrapped his lead around my right ankle and was pulling in the direction opposite the one in which I was walking. He’s yelping, I’m hopping on the free foot cussing up a storm, and still, the bricks are getting closer. 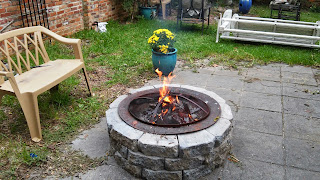 To avoid injuring my handsome face, I twisted and landed ass-and-elbows first in the fire pit, which, of course, is filled with ashy mud and rainwater. I stayed there about five minutes scratched up and wet, assessing what, if anything, was broken, and trying to determine ways to kill first the dog and then my daughter without having to serve prison time. Discovering no recourse, I got up, walked to the spigot to fill his bucket and found the first thing Sparky did this morning when I let him out was go to the part of the yard where he does not live and take a giant crap.

As noon—or twelve o’clock, as the case may be—arrives, I picked up my dear daughter who plopped down into the passenger’s seat, placed her hand on her forehead and said, “Oh. My. God. I’ve had, like, the most terrible morning.”

I left the school parking lot looking for a telephone pole to ram into to take us both out and realize the day is only half over!

Does this sound familiar, my writer friends?
Posted by Sam Morton at 12:00 AM

If we really understood what having children meant, most rational adults would choose instead to adopt someone else’s – once they reached about twenty-three or so. :)

Another typical day in the life of a writer.

I'll never forget the day my son and I were wrestling (he was about 4 years old), and he accidentally punched me in the face. I got ice cubes and wrapped them in a towel to avoid facial swelling. As a multitasking mom, I held my teething daughter with one hand, the towel in the other, and sat down. My daughter realized what was in the towel and begged for an ice cube to numb her sore gums. Yes, she choked on it and threw up all over me. It was my children's day of infamy.

Then there was the day my daughter used me as a trampoline. I was laying on the floor of our family room (for some reason I forget). She jumped off the sofa and onto my back. Back spasms for a week.

Another day my son put a stink bomb under my chair....

Or how about the time, as high school team mom, I packed the entire teams' dinner in coolers for an away game to be opened hours later, and the stupid coach immediately unpacked what I had spent hours packing. I think the kids lost that day since they ate an entire meal before the game.

Or the time one of my adorable brownie girls scouts (I hate GS, but volunteered for my daughter) kicked me in the leg for no apparent reason.

I'll stop here because I'm wondering what grandchildren will bring.

Your story is so funny, Sam. It had me laughing. loved it.

Since I had four kids in less than five years, my stories could fill a book. Most of the accidents are what happened to my active little ones, however I did develop a bad back from hauling kids on my hip. Because of this, a man who worked with my husband said he was able to manipulate the back and cure the problem. So he came to the house and had me get on the pool table in the rec room so he could work on my back. I don't remember if it worked or not, but I do remember one of my kids telling people some man they didn't know had their mother on the pool table. Did I mention my husband worked two jobs so I took the four little rug rats with me grocery shopping and almost anywhere else I had to go. I also was a den mother for Cub Scouts for 3 years and a Girl Scout leader for 10 years and taught CCD at my church for 5 years.

Okay, the kids are grown now and I live alone except for assorted critters, however, the interruptions of my writing time happen daily. If it's not my dog or two cats wanting attention, it's a family member or friend on the phone.

Yes, just set aside some time for writing. And watch it disappear.

I had planned to write all Thursday afternoon, but when I went to the doctor they were having a code white active shooter drill and I got to spend lots of time in an office with five strangers, one of whom was claustrophobic. Maybe there's a story in there somewhere….
Writing time - pouf!