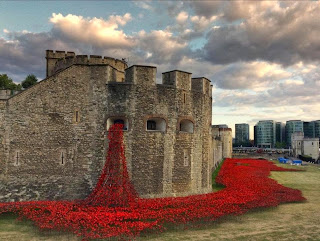 Poppies symbolize remembrance throughout the world. Last year, thousands stood in silent contemplation of the controversial Blood Swept Lands and Seas of Red art installation at Windsor Castle. A ceramic poppy symbolizing each of the 888,248 war dead of the United Kingdom in World War I ringed the castle in crimson.

How did the poppy become a symbol of remembrance? 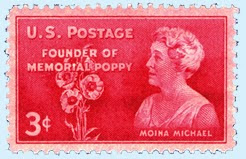 It all started with a poem and a teacher from Georgia.

Moina Belle Michael grew up on a plantation. At fifteen, Moina (pronounced Mow-EE-na) started teaching in her rural town’s school, and when years of bad weather ruined crops and bankrupted her family, her teaching paid the bills. Eventually the family got back on its feet and Moina continued teaching, becoming over thirty years an admired educator and influential professor at the University of Georgia.

When World War I began, Moina was in Germany, halfway through a European tour. As she wrote in her autobiography The Miracle Flower, “the very foundations of our world were shaken by a radical student who threw a bomb into the carriage of an Austrian archduke.” Moina’s group returned to the US on the RMS Carpathia, the ship that had rescued survivors of the Titanic two years earlier. Moina returned to Georgia, where she resumed teaching at the University of Georgia. But she ached to do something to help the war effort. 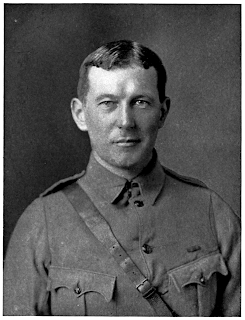 After a two-year search, Moina took the only position open to her as a 47-year-old woman with no medical training: working for the YMCA Overseas War Secretaries organization in New York City. While working at a conference, Moina read Canadian Lt. Colonel John McCrae’s poem “In Flanders Fields” in The Ladies’ Home Journal. McCrae, a Canadian surgeon, had written the poem after performing a burial service for one of his students killed in action. Scarlet poppies, one of the few flowers to thrive in disturbed earth, ringed the battleground.

“In Flanders Fields” moved Moina to write a poem in response, “We Shall Keep the Faith.”

Moina also did something that I don’t think many men would have done: she rushed to Wanamaker’s Department Store and bought up the entire stock of red silk poppies. She pinned one to her coat and distributed the others at the conference, asking delegates to wear a poppy as a remembrance of those who died in Flanders Field. Because of this, she became known as “The Poppy Lady.”

In the United States, Moina’s project struggled to gain traction until several veterans’ organizations, chiefly the American Legion and the Veterans of Foreign Wars, adopted the idea. Now, millions of small paper poppies are distributed each year.

Almost one hundred years after the United States entered World War I, Moina’s poppy remains a small but poetic tribute to the fallen. Moina believed that the poppy symbol transcended mere sentimentality, and by the simple gesture of wearing one she would honor the memory of the soldiers lost. 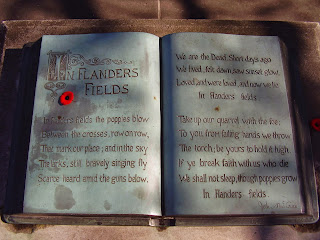 “In Flanders Fields” by John McCrae

In Flanders fields the poppies blow
Between the crosses, row on row,
That mark our place; and in the sky
The larks, still bravely singing, fly
Scarce heard amid the guns below.

We are the Dead. Short days ago
We lived, felt dawn, saw sunset glow,
Loved and were loved, and now we lie
In Flanders fields.

Take up our quarrel with the foe:
To you from failing hands we throw
The torch; be yours to hold it high.
If ye break faith with us who die
We shall not sleep, though poppies grow
In Flanders fields.

“We Shall Keep the Faith” by Moina Michael

Oh, you who sleep in Flanders Fields,
Sleep sweet – to rise anew!
We caught the torch you threw
And holding high, we keep the Faith
With All who died.
We cherish, too, the poppy red
That grows on fields where valor led;
It seems to signal to the skies
That blood of heroes never dies,
But lends a lustre to the red
Of the flower that blooms above the dead
In Flanders Fields.
And now the Torch and Poppy Red
We wear in honor of our dead.
Fear not that ye have died for naught;
We’ll teach the lesson that ye wrought
In Flanders Fields.

How do you celebrate Memorial Day?

I did not know or have completely forgotten the origins. The “War to end all wars” did no such thing. That war was brutal; and the peace was brutal in a different way.

Perhaps we should require everyone running for Congress or president to wear on their lapels a red poppy instead of their ubiquitous American flags. That might underscore a better sense of what patriotism is and the cost of foreign policies that lead to wars.

I agree, Jim. War seems to be the solution to every situation. It's become too predictable. Thanks for giving us the history, Shari. I read a few mystery series set during WWI, like Jacqueline Winspear, which have taught me about the brutality of this war and the effects, which have lasted into present day.

The War to End All Wars….so sad to think that people believed that.
I like your idea, Jim. Maybe we'll start a movement the way Moina did. I'm going to send my red poppy to my representative.

Shari, Thanks for the information. I knew only bits and pieces of it until I read your blog. A friend of mine wrote the following about war The loudest cheerleaders are those least likely to get into the game.

E. B., I love Jacqueline Winspear's books, even with the thread of sadness that runs through them. On her blog she has talked about how her work was inspired by her grandfather's experience in WW I.

I had no idea that the wearing of the poppy in remembrance started in America. That surprises me because when we go to England and Canada each year to attend Royal Marine events, we see everyone, and I mean everyone, wearing a poppy. Here in the U.S., you rarely see it.

My father belonged to the Disabled American Veteran's association, and I can remember selling the poppies to support the organization. So many Americans don't even know the symbolism of the poppy. Your blog will educate so many people about its significance. Thank you for helping to spread the word about this wonderful tradition.

Grace,
I think the idea of wearing poppies probably occurred to many people. This story about Moina struck me because of the difficulty she had trying to get the idea accepted here.
Now, sadly, you are absolutely right. I see so many people brush past the vets handing out the paper poppies. In Europe, the war's devastation probably drove the roots of remembrance deeper than here. A friend just posted on FB about a Belgian Memorial Day ceremony she attended - thousands of Belgians turned out, all these years later. We Americans will just go shopping and grill hot dogs. It's sad.

What a wonderful tribute to Memorial Day. I had no idea of the origin of the poppy as a flower of remembrance. I had always thought the poem was the origin. I guess, in a way, it was. Having come from an era where one memorized poems in school, Flanders Fields was my go to for all military holidays. Although the poppys in my area only made an appearance at Veteran's Day. Happy Memorial Day to all.

Thank you for sharing this story, Shari! I bought a poppy just the other day and wrapped it onto the strap of my purse. Now I know the history behind the poppy.

When I was a child, every year my father would read us "In Flanders Field" and we would help him sell poppies. We were instructed to give one to anyone who wanted it, and not demand payment (when I look back on it, it was probably donations requested, not that we sold the poppies.)

I wasn't aware of Moina Belle Michael and her role in it.

When my kids were in school, every Memorial Day they marched in the parade with their classmates, carrying flowers to place on the soldiers' graves in the Gettysburg cemetery.


Shari, although I knew the poem "In Flanders Field," I never heard of Moina Belle Michael. Thank you for sharing this beautiful touching story.

I had two uncles who fought in WWII, but fortunately they came back unharmed, although who knows if they suffered from PTSD or not. They never talked about it. A cousin of mine fought in Viet Nam and loss one of his legs. He still skies and dancers. Totally awesome. As for me, I plant the graves of my loved ones for Memorial Day.

I agree with Jim, and also read the Jacqueline Winspeare series which really portrays the war as it was. To much poetry and literature in the past glorified war.

Hi Kait,
I think the poppies are also distributed at Veterans Day. We are both from the days of more poetry in schools. I wonder if any students today know this one.

Thanks for stopping by, Sherry! I have one on my purse too!

KM, living so close to Gettysburg, you must have a different perspective on Memorial Day than most people.

Gloria, so true. This poem holds a lot of anger - of course, McCrae had just buried one of his students and that comes through. Maybe in this poem is the beginning of that turn away from seeing only glory in war and seeing the whole picture.

Oh my! What a powerful woman with a wonderful mission. Thank you for sharing her story.

Shari, thanks so much for sharing this powerful message. I hope you and Jim start a new tradition of sending poppies to elected officials.

Thank you for sharing this information, Shari. I had heard pieces of the story, but I never knew about Moina Belle Michael. I'm always amazed that one person can make such a big impact.

A woman truly connected to the Remembrance Poppy emblem is Madame Guérin – history has forgotten her. This gives a detailed insight https://poppyladymadameguerin.wordpress.com/