The Art of Detection in Winter 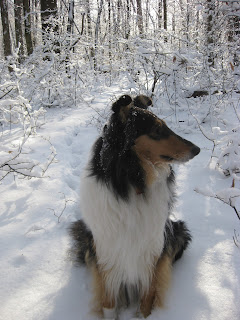 A part of my daily routine is a morning walk in the woods with Maggie, my collie. On those days when I'm unable to take those walks, I feel my day is incomplete. It's where I get many of my ideas for poems or mysteries. I already have an idea for one of my characters discovering a body while she's walking in the woods in a future book. I know the victim, the murderer and the reason for the murder. I'm just waiting until my series has a book taking place in the winter.

Every season offers something of interest to an amature naturalist like me, and winter is no different. In winter my deduction skills are honed as I try to solve real life mysteries. Fortunately, nothing involving murder or an actual crime. While Maggie uses her long nose for clues on what has passed through the woods in the night, I use my eyesight and knowledge of animal tracks. I observe deer tracks and know if it's a doe or a buck that's briefly followed my paths. A doe leaves neat clean tracks, while a buck tends to not pick his hooves up as high, thus leaving a dragging mark behind. Was it a dog, fox or coyote that went through last night? Dogs like Maggie travel erratically following scents while a coyote or fox is heading somewhere, and their tracks show this by little or no deviation from their route. The size of the tracks will determine whether it's a fox or coyote. Squirrels, raccoons, possums and rabbits are easy tracks to identify.

Several winters ago, I had a real mystery to solve. Human tracks appeared following my trail. They came from the directions of homes bordering the north side of my woods, followed the length of the back of my property and then veered west. In Holmsian deduction, I surmised it was a man - larger footprints than mine. Also, in the more than twenty years I've walked here, I've rarely come across anyone, and the several times I did, they were male hunters. So this was a logical deduction to make. Another reason I surmised it was a man, and not a woman, is because few older women like me go for solitary walks in the woods. I noticed the man had a dog on a lead. The dog tracks were close to the man's and did not veer off roaming like any loose dog would. My next deduction was that he was an older man and probably retired. His tracks appeared later in the day and on week days when most people are working and teenagers are in school. The tracks appeared on a daily basis, and I started following them beyond my my property so my morning walks became much longer into areas I'd never covered before. I saw the signs he used as markers - a broken branch here, the empty case of a shotgun shell on a twig where the trail turned, etc. - so I knew he must have been walking my woods and beyond for some time before the snow fell exposing his tracks.

Finally, one day when I'd been delayed and went for my walk later in the day, I met him. Yes, it was a man, a neighbor I'd never met. He was retired and had a beagle on a lead. We talked a while and then went our separate ways. I never got his name.

This year I didn't see his tracks. Of course, snow was late in coming, and we haven't had much this winter. I wondered about him. From his back yard, most mornings his beagle barks at us, and Maggie answers, but I've seen no signs he's been walking. Was he okay? Had something happened to him so he wasn't able to walk? Was he even still alive? And then last week, I saw him walking down the road in front of his house with his beagle. Another mystery solved. Well sort of. Why was he walking on the road instead of in the woods? Had he had a heart attack and had to take shorter walks? Was he deterred from walking in the woods because with the record breaking rain we've had this past year, parts of the trail are quagmires of mud, especially in the woods beyond me. Even with my rubber barn boots it's been rather unpleasant walking in spots, and I'll admit, most of the time I've skipped the paths beyond my own, too this winter.

Have you ever had a mystery to solve? Were you able to solve it?
Posted by Gloria Alden at 12:00 AM

Tracking down real life clues can be dangerous. Glad your sleuthing wasn't. But observing dogs smelling down clues can serve as reminders that there are clues where we least expect them. I hope Maggie is a good example, and that she gives you ideas for your mysteries. My favorite dog sleuth is Chet, Spencer Quinn's character.
Chet's favorite treat is Slim Jims, what is Maggie's?

Much of the fun part of writing my first novel, Abraham Lincoln for the Defense, was solving a series of mysteries to create a plausible plot line from historical facts and gaps in the available information about an actual historical murder trial, I felt like a detective and a writer a the same time.

Gloria, love to see Maggie in all her glory at the top of your post! Reading tracks is so much fun and a good workout for the imaginative muscles, I think. Great post!

You're such a sleuth. Writing mysteries makes us think about details that others skip. I love your clever deductions, Sherlock!

And, BTW, Maggie is gorgeous!

E.B. I don't think I'd be brave enough to actually sleuth if I thought I'd be in danger. Maggie likes bits of bacon treats for dogs or peanut butter. When she's being especially annoying while I'm trying to type, I smear a little peanut butter on one of her chew bones, and it keeps her away for a while. It's not easy typing with a big dog leaning against me, especially since my chair has wheels.

That sounds like such fun, Warren. I haven't tried writing historical mysteries, but I love reading them.

I agree, Linda. I did come across some tracks a few years ago that I couldn't read. It was a creature that was killing my hens, and I couldn't figure out how it was getting in. I thought of a weasel, but it turned out to be a mink - something I had no idea was in the area. I saw it weaving in and out of the weeds at the edge of my pond. Putting another layer of fencing with smaller holes at the bottom solved the problem.

Thanks, Krista. It's fun to have a non-threatening mystery to solve.

Congratulations on your Agatha nomination for short story, Krista.
There were a lot to choose from this year, weren't there.

Love Maggie's picture! Your blog is wonderful. Your mystery man makes us wonder how many people would have taken the time to follow his tracks and find out who he was. Your sleuthing - well done.
Mary