Writing Down the Hard Stuff

After much urging I have decided to start my seventh novel. It is set in a fictional town in Delaware in the 1750s. After some poking around in historical sources, I realized that I couldn’t write about Colonial Delaware without including slavery. In the 1700s half of the slaves in Delaware were born in Africa.

Delaware ran hot and cold on the issue of slavery. The colony was divided between the Quaker north, where slaves were house servants or worked small plot s of their master’s land, and the south, where larger plantations demanded free labor to survive. While there are no slaves in Delaware today, that division still exits.

Early on, people of color, free or enslaved, were not allowed to leave the state or return to it. This kept them from being sold south to the harsher work conditions on the large cotton plantations. If they left the state and were gone more than three days they couldn’t come back. This kept slaves from being purchased elsewhere and brought into the state, but it also meant that people were not allowed to return to their families.

Delaware was a Union state during the Civil War, but at the time there were 1800 slaves within our borders. Not a single one of them was freed by the Emancipation Proclamation, since it freed only slaves from the rebel states.

Newspapers offer useful details about runaway slaves or indentured servants: clothing, patterns of speech, country of origin, education, and the amount of the reward. Books by Delaware scholars provide understanding of laws, living conditions, and social interactions. It’s harder to find a narrative that tells what it felt like to be uprooted from your home and live the rest of your life in servitude.

The more I read the more I realized that slavery was going to be central to the plot, not just something to be mentioned in passing. How is a novelist supposed to deal with this? I need my main characters to be likable but they have to be slave owners. How can I strike that balance? I’ve read plenty of good books where the writer tackled cultures not their own. How does a 21st century white, middle class woman write about 18th century slavery? I will be working through this problem the whole time I am writing, and rewriting.

My plight reflects a split that has been present since the beginning of the colony, and is evident in the paper this morning. The black community is disputing the right of the city to award a grant to the Delaware Historical Society (run by people like me) to set up a black heritage and cultural center. 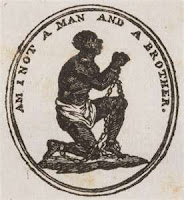 The other day I ran into this quote by James Baldwin: People who treat other people as less than human must not be surprised when the bread they cast upon the water comes back poisoned.

Seems like a pretty good basis for a novel.

I commend your persistence and your honesty. Slavery was important in the development of the colonies and then the states. I don't think we can ignore the truth just because it is uncomfortable/difficult/inexcusable. I've written two novels about Abraham Lincoln and one about "Bleeding Kansas." I have characters who are slave holders and who argue for the "Peculiar Institution." They were hard to write about, but it would have been dishonest to ignore them.

KB, I think if you are aware and try to write consciously and unflinchingly that this will be a great book. Good luck!

Interesting blog, KB.I think you can do it and quite well. Although there were some complaints about the author of THE HELP witing about black maids, all in all most people think she did a good job. Could the daughter or son of one of your slave holders be opposed to slavery? Just a thought. And then some slave holders honestly felt their slaves depended on them for their care. Misguided, of course, but that was often the thinking at that time.