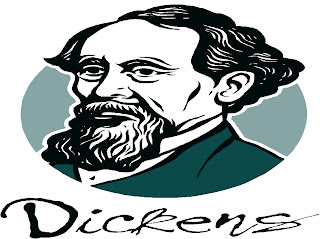 Thomas Carlyle on Charles Dickens wrote ". . . deeper than all, if one has the eye to see deep enough, dark, fateful, silent elements, tragical to look upon, and hiding amid dazzling radiances as of the sun, the elements of death itself."

When Dickens died in 1870, the world mourned his death. He was the J.K. Rowling of the time, a literary superstar. Although his novels were true to life and not the fantasies Rowling's are, he had passionate followers, who looked forward to reading each new chapter of The Pickwick Papers serialized in magazines and all the books to follow, serialized or published in book form.

Eventually, when books became cheaper and easier to publish and flooded the markets, critics and professors decided the public needed help in deciding which books were worth reading. In the twentieth century, it seemed that unless a book was complicated and difficult to read, it was not considered a work of great art. It was then Dickens started to fall out of favor, although not totally. There were always faithful followers.

Wilkie Collins is considered the father of the mystery novel, but in my opinion, Dickens was the true father. Collins was a youthful friend of his and most likely picked up all the important elemements of writing a novel, including mysteries, from Dickens, i.e. plot, suspense and cliff hangers to name three. Dickens wrote Bleak House in 1851, which had the first detective, Inspector Bucket. It was the same year he first met and became friends with Collins, who didn't start writing until later.

When Dickens died in 1870, The Mystery of Edwin Drood was appearing in monthly installments. But long before he tried his hand at writing a mystery, he wrote of good vs. evil - think of Fagin in Oliver Twist, for instance - and isn't that what mystery writers write about? Dickens created so many interesting characters that live on today like Pip, Cratchet, Tiny Tim, and a host of others.

And like his characters, Charles Dickens' books live on. Whether or not you like him - and I do - he has returned to favor among the literary elite, who decide which authors are worth being on the list of those who must be read. Christopher Hitchens wrote "Dickens was able to mine this huge resource of London life, becoming its conductor and chronicler like nobody since Shakespeare himself."

And now I need to get to that one thousand pages plus biography of Dickens that's been on my library shelf for some time, and also pick up a copy of Bleak House, one of Dickens' works I have yet to read.

Do you like Charles Dickens? If so, what is your favorite Dickens' book?
Posted by Gloria Alden at 12:00 AM

Good post, Gloria. Sorry, not much of a fan though I've seen all the movies. :)
Good luck with that biography, but I know how it is when you like something or someone. I can't tell you how many bios I've read about Jane Austen and I still have more on my list.
Patg

It is interesting to me how writer's reputations rise and fall over the years. Literary trends and criticism change over time but writing itself endures.

Very interesting post, Gloria. I love Dickens as well. When people are still talking about someone after all this time, it's obvious the impact he had on the literary world. His classics will live on forever.
Mary

Lovely post, Gloria. I especially love the quote from Carlyle that opens it. I think that catches the essence of Dickens.

CD is definitely an object lesson for all of us writers. After his death, his reputation sank in the hands of the academics (who preferred the aristocratic Thackeray). But everyday people kept reading him, and he's had time for the academics to come around.

Pat, The Dickens' biography will not be a quick read through. I have a lot of long books started and work on them gradually as the book club picks take their place for a while as well as the latest good mystery I want to read. But eventually I do finish them.

Warren, both you and Mary wrote,
no matter what the critics have
said, his writing lives on. Very
few still have their works read
and enjoyed this long. Jane Austin
was one of those few, also.

An American writer from the late
19th century, who I enjoy a lot,
is Sara Orne Jewett. She's not
terribly well-known, but she
writes with humor and her
characters, are much like those
Dickens'.I'm sure she must have
been a fan of his.

Interesting post, Gloria. Glad to share your love of Dickens.
I had the good fortune to have a Dad who bought me week by week one of Dickens' books with gold edges to the pages. I read most of them before I was twelve and loved his characters. Sure, savvy people today can say he's long-winded and sentimental but his readers didn't have an attention span of thirty minutes. I read that he acted out many of his characters. If a character crammed food into his mouth, Dickens tried it. If a character rolled around on the floor, so did Dickens.

Interesting, Pauline. I hadn't heard that before about Dickens. I was lucky that my parents, who didn't have a lot of money, still belonged to the Book of the Month Club so we got books in the mail every month. I still have many of those books because after my parents died, no one but me wanted them. I also have a really old book,The Posthumous Papers of The Pickwick Club that was my dad's. It doesn't have a copyright date and from the illustrations, I think it was probably a reprint from the late 19th or early 20th century. A little note inside said "This book would have cost, at the then established price of novels, about four guineas and a half. I do so love old books.

My favorite Dicken's novel was Nicholas Nickleby. My least favorite and one that I never completed was Our Mutual Friend. I read many of Dicken's novels while I was in high school.

They were a good reminder in the midst of teenage angst that I had it good.

How can you not love books with characters called Wackford Squeers, Newman Noggs, Mr. Pecksniff, or Podsnap. Podsnap would be a good nom de plume.

Anyone know who Our Mutual Friend was? Perhaps it would be good for me to give it another go.

It's interesting to reread books read when young. How different the perspective and understanding becomes in maturity.

Good post, Gloria. The way you love Dickens, I love Trollope, who was a favorite during the London blitz, was read in the underground, where people went during bombing raids. I recently read almost all of Trollope's 50 novels, all different characters. I like the way older novelists took the time to embellish minor characters. Carry on with this blog, you have good thoughts. Judy

Dickens was a fascinating character as well as an imaginative writer. He was a great speaker as well as writer. I have enjoyed his fiction writings as well as his account of his visit to the United States. he was a house guest of some of my favorite New England personalities, James and Annie Fields.

I really enjoyed your posting. It's easy to almost forget the great writers of the past and how much they have enspired those that have come later.