Recently I had my first ever in-person book signing. I hesitate to say my first event was a "public event" because it was on Fort Meade, a US Army base here in Maryland. By nature of it being a Department of Defense facility, access is only open to military service members and their families, DoD civilian employees and contractors. But I still had what I would call a successful event, selling about a dozen books and gaining a few website subscribers. (I am able to sell my own books since I am with a small publisher. Authors with the bigger pubs usually cannot.)

Before my event, I asked in my agency's Facebook group for advice on what to have on hand, besides the obvious books and a pen. I had to have a way to process credit cards (required by the venue) and got a Square card reader that I am extremely happy with. I had a few knickknacks to help set the scene for the books, my bookmarks, my QR code for my website, a signup sheet for my newsletter, hand sanitizer, and some candy. One piece of advice from agency authors that paid off was to have a pad of sticky notes or notecards for people to write down the name they wanted a book made out to. Fantastic advice, and I used quite a few note sheets.

For this venue, including candy backfired on me—many a mother gave me that look when their child saw those Jolly Ranchers, driving them further from the table instead of drawing them in. Also, not good when I decided it would be smart to eat one myself…which made me look like a chipmunk trying to smile at passersby. (And to think, I took hard candies instead of chocolate to keep myself from being tempted.) So, I will be leaving candy at home next time, or at least put it in a container that isn't at eye level for children. Lesson learned, consider the venue and audience before including candy.

My second event was a table at the Fright Reads Book Fest, held last weekend, only a few miles from my home. This is a newer fest, on its second year, and focuses on mystery, thriller, and horror books, and other seasonal craft vendors. (Candy was expected there!) I had planned to focus on the Chesapeake Crimes: Magic is Murder! anthology since murdery magic is more Halloween-esque than Hawaii or rural Idaho, but I took copies of my other books as well. I had a table adjacent to another author in the anthology, Cathy Wiley, and the plan was we would both sign the anthology for the customer. I took five to ten of each of my books, and was surprised to sell out of my copies of Welcome Home to Murder! Overall, I sold just as many books as I did at Fort Meade, but in five hours instead of two days. This goes to show that a book-centric event is definitely more effective than a cold-sales table in a general shopping mall. I also got a dozen newsletter subscribers there compared to three at the military mall.

Two additional things I experienced at Fright Reads cemented things I had believed before. One, the first in a series sells better than the follow-on, which is completely logical. Second, cover art makes a difference. 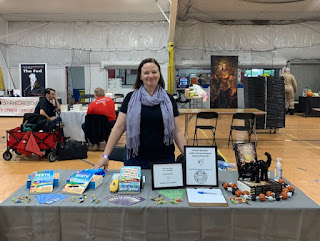 Before the Fright Reads Book Fest 2022.

At this venue, most people paid cash, which was a surprise. (I myself rarely use cash anymore since the pandemic.) I had to scramble to get additional change and my cash didn't quite add up in the end. I had swapped books with another vendor, a purchaser "tipped" me by rounding up, plus I got my own spending money mixed in. Doing all credit card like I had before was much easier to deal with. (Plus you get a neat report!) If I do another mainly cash venue, I will make a tracking sheet ahead of time. (Or just shrug it off since it's all my money anyway.)

Something to fix for next time is how to get emails for the newsletter signup. Sometimes it is difficult to read handwriting, and one address from the first event bounced back as incorrect. I'd like to find a way to combat that, most likely by using a tablet open to either a notes page or directly to the website, depending on wifi access. My concern there is for the tablet disappearing. Does anyone have other suggestions for this problem?

Writers, do you have any good stories or advice from your signings? Readers, what do you like to see on an author's table?

I use a simple newsletter sign-up sheet and have in big, bold letters at top asking people to PRINT LEGIBILY so I can read it. So far, that has worked.

I always have bookmarks available, both for those who purchase a book and for those who prefer to read electronically so they have something with my covers and a website link.

Good tips, Rosalie! I don't do many signings apart from conferences. When I do, I have recipe cards - book cover on one side, recipe on the other. I've used handwritten signup sheets for my newsletter (or slips, if I'm doing a giveaway) and always end up with a few illegible ones.

No advice, for you, but I learned a lot from this blog. It sounds like you had all successful events. Kudos.

Jim -- I'll try that! I do have the website link (and one with a QR code which so far has been wildly unsuccessful) and I make a point of saying my website has multiple purchase links, to include Indie bookstores. And yes, my bookmarks without covers are cute, but having covers are much more effective from a marketing standpoint, I think.

Molly -- That would require me to have recipes lol!

My main advice is not to be alphabetically close to any popular authors so that you get seated at a signing table alongside them.

I was once right next to Louise Penny and no way could anyone get close to me, even if they wanted to buy one of my books.

I ended up taking pictures of her fans along side her, and actually had a good time, but it didn't result in any sales for me at all. Or even anyone getting through to talk to me. And I had candy!