The Development of Character by Kris Neri

The worst day of school for me when I was a kid? Had to be the first. Sure, it was fun to see friends again and wear a new outfit. But the first day of school was also when we were invariably assigned to write an essay on “My Summer Vacation.” My family never took vacations. Never. Now I see that to be a minor part of our dysfunction. But then? The embarrassment overwhelmed me. I desperately longed to be more like other people, whatever I thought that meant, but I considered myself hopelessly odd.

For a few years I faked my way through descriptions of fictitious trips, always hoping nobody spotted my lies. Then, one year, I decided if I was going to lie, I should lie big. That year I wrote about my family’s vacation trip to the rings of Saturn, fleshing it all out with pure imagination. Did my teacher appreciate my creativity? She did not. She put me outside in the hall to “think about what you did.”

What I did? Are you kidding? I wrote a sci fi story! That day in the hall I came to two realizations that continued to develop over many years: 1) I really did march to the beat of a pretty out-there drummer. But I wasn’t odd, as I’d always regarded myself. I was quirky. I was, creative. And, 2) I came to see eccentric people as the most interesting. 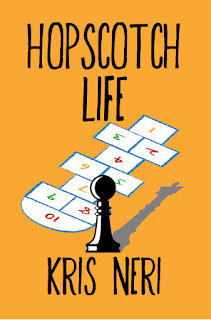 Since then I’ve made a career out of writing about one eccentric character after another.

The absolute quirkiest character I’ve ever created has to be Plum Tardy, the protagonist of my latest crime-women’s fiction crossover, Hopscotch Life. In her own words: Plum sometimes wondered if everyone else had received a rulebook at birth, complete with guidelines for every eventuality, which guaranteed a successful life. She knew that she not only hadn’t gotten one, she couldn’t even imagine how it might read.

Poor Plum. Between being saddled with a goofy name, to the way she misquotes adages, to her off-beat style of dress, rather than move in lockstep toward successes like more conventional people, naturally, Plum erratically leaps through life as if it were some giant hopscotch court.

Still, that doesn’t explain the startling way her life unravels. Plum catches her fiancé Noah Rowle cheating with a coworker. Together Noah and the other woman are pursuing a real estate deal designed to allow the soul-sucking Budget-Mart chain to gobble up blocks of land across the country. Thinking her life couldn’t get any worse, Plum also learns Noah stole money from her. Desperate to flee, she stumbles onto a bag of cash. Assuming that to be the booty Noah took, and believing it to be rightfully her own, Plum runs off with it.

She heads toward a destination that’s just a name on a map. There, she finds an unorthodox town that needs someone exactly like her. In one crazy leap, she not only makes that place her home, she thinks she’s hit on a way to stop to Noah’s land score.

Too bad what she took wasn’t actually her money. While Plum tries to help her new town halt the steamroller of progress, even with her unconventional perspective, she could not have predicted the way her past would collide with her present. Will her offbeat approach save her, or land her in behind bars in hopscotch hell?

Midwest Book Review has described Hopscotch Life as: “Showcasing a genuine flair for originality and the kind of deftly crafted narrative storytelling that keeps the fully engaged attention of the reader from first page to last…”

Personally, I still think quirky people rule. But then, you’d expect me say that.

Her novels have been honored by such prestigious awards as: the Agatha, Anthony, Macavity, Lefty, and New Mexico-Arizona Book Awards. She is a three-time Lefty nominee for her humor, and a four-time New Mexico-Arizona Book Award winner for her own novels, as well as books to which she’s contributed. Kris also teaches writing for the prestigious Writers’ Program of the UCLA Extension School and the Sisters in Crime Guppy chapter. She makes her home in the funky town of Silver City, NM, where she lives with her husband and two pushy terriers.

Best of luck with your latest, Kris. I keep reviewing my notes from the Humor class you taught the Guppy Chapter a while back, hoping some of it will rub off, but like Plum Tardy – I’m still looking for the manual.

Kris, I’ve taken, and loved, many of your classes, but I confess, I haven’t read a Kris Neri creation. Boy, is that gonna change! Where have I been all this time? Don’t answer that – it could be scary.

I remember those essays. Not the stuff of fun!

Hi, Kris! You and your characters are my kind of quirky. Nice to have you here today.

I love to read about these quirky characters!

My teachers had the sense to ask us to write about what we did over the summer rather than vacations, well aware that many of the essays would have to do with taking care of younger siblings or helping out with the family business.

I remember those summer vacation and spring break essays. Ugh. I read 59 library books. I learned how to dive without doing a belly whopper. Over spring break, one of my chores was washing all the screens and windows. What a glamorous life I had!

Thanks for the good wishes, Jim. I'm still looking for a manual, too!

Thanks, Kait. It's great connecting with you again here.

Thanks for the welcome, Molly!

KM, that is so much better than the vacation assignment. You had good teachers.