An Author Interview with Meri Allen (Shari Randall) by E. B. Davis

Justice will be swirled by amateur sleuth Riley Rhodes in the first in Meri Allen's brand-new mystery series, The Rocky Road to Ruin!

Riley Rhodes, travel food blogger and librarian at the CIA, makes a bittersweet return to her childhood home of Penniman, Connecticut – land of dairy farms and covered bridges - for a funeral. Despite the circumstances, Riley’s trip home is sprinkled with reunions with old friends, visits to her father’s cozy bookshop on the town green, and joyful hours behind the counter at the beloved Udderly Delicious Ice Cream Shop. It feels like a time to help her friend Caroline rebuild after her mother’s death, and for Riley to do a bit of her own reflecting after a botched undercover mission in Italy. After all, it’s always good to be home.

But Caroline and her brother Mike have to decide what to do with the assets they’ve inherited – the ice cream shop as well as the farm they grew up on – and they’ve never seen eye to eye. Trouble begins to swirl as Riley is spooked by reports of a stranger camping behind the farm and by the odd behavior of the shop’s mascot, Caroline’s snooty Persian, Sprinkles. When Mike turns up dead in the barn the morning after the funeral, the peace and quiet of Penniman seems upended for good. Can Riley find the killer before another body gets scooped? 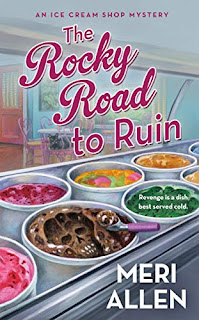 In the first book of this new series, The Rocky Road to Ruin, readers meet Riley Rhodes, the main character. Riley’s history provokes the question: How can a librarian also be a spy for the CIA? We learn a bit about Riley’s latest CIA caper, and I hope in subsequent books we learn more. As a writer, I see subplots abounding from Riley’s background. Food blogging? Another gateway to subplots or complications of the main plot.

The secondary characters supporting Riley are positive influences with the exception of her stepmother, who is unintentionally passive aggressive or perhaps, it is intentional. And yet, it may be that Riley can’t stop resenting the woman, but for what reason? In any case, Riley will have to deal with her stepmother in one way or another once she determines who or what is the problem.

What is the thinking on the name change? You are writing to the same cozy mystery market. Your writing was nominated for an Agatha award. Why change a successful brand with a new name? (I’m so against this because for me it’s the writer not the book.)

My agent says the traditional thinking is, “new series, new name.” He’s the pro, so I followed his advice.

Is there a Penniman, Connecticut? If not, where did you come up with that name? Is it a New England surname? Is there a Seven-Mile River? 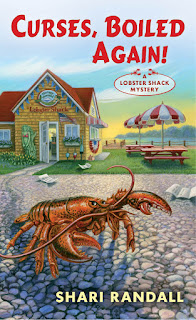 Penniman exists only in my book, alas, but it was inspired by my favorite bits and pieces of real Connecticut villages and towns – the covered bridges, the town greens, the unique bookshops and tea shops. The story is set in what’s called the Quiet Corner of Connecticut, the northeastern corner, and it is filled with many special small towns. But there is a real-life Eight Mile River near me. The name Penniman came to me because I’d decided to name Riley’s dad’s used bookstore The Penniless Reader, and I worked backwards from there for the town’s name.

Riley’s father was a former teacher and now owns a second-hand bookstore. Her stepmother, Paulette, was a nurse. How does Paulette have the money to support her champagne tastes?

Paulette’s first husband was loaded and she got a sweet alimony deal.

The ice cream store, Udderly Delightful, was created by Riley’s best friend Caroline’s mother Buzzy, who has died. Caroline lives in Boston and works as an art appraiser for an auction house. Why does she want to keep Udderly Delightful open?

For Caroline, holding onto the shop is holding onto Buzzy’s memory. Caroline and Mike were adopted by Buzzy after spending several difficult years in foster care. Udderly Delicious was Buzzy’s baby and a Penniman institution, and Caroline doesn’t want to give it up

Although Buzzy adopted Caroline and Mike, they are full siblings, and yet they have little in common. Why, if they were both raised by Buzzy, does only Caroline seem to have Buzzy’s values?

This is a great question. Nature vs. nurture, right? I think Mike’s brash, outgoing personality, and athletic prowess took him in a different direction than Caroline, who is shy, artistic, and introspective.

Even though Buzzy has died, she is very much a character. Riley’s mother died when she was two years old. Was Buzzy like a mother to Riley also?

Buzzy did fill that role for Riley, and that’s part of the reason she decides to take the job as the shop manager. Riley lived in Washington DC for many years and traveled extensively, so staying in Penniman also means she can be close to her dad. 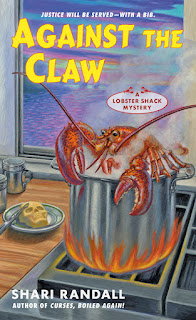 Was Riley released from the CIA’s employ, or does she feel the need for a career change after what happened in her last assignment?

Riley wasn’t fired, but a disaster in Rome made her doubt herself. She sees the job at the ice cream shop as a chance to regroup and shift gears. Riley has lots of creative ideas from her travel and food blog, so she’s eager to explore those possibilities.

When Riley is stressed, how can she possibly eat hot fudge sundaes topped with potato chips?

A potato chip topping is delicious! The chips add a nice salty crunch.

Buzzy’s cat Sprinkles (does she have a urine problem or does the name refer to those adorning the top of ice cream?) is also a main character, an antagonist of sorts. Sprinkles plays a game with Riley that could get her hurt. Is there nothing Riley can do about it?

Sprinkles, a fabulous snowy white Persian, is definitely named for the pretty ice cream toppings. She’s a diva who considers herself an adornment to every life she encounters. A former show cat, Sprinkles was kicked off the circuit for biting, scratching, and general bad behavior. She doesn’t want to share Caroline with Riley and resorts to all sorts of sabotage to get her way. It keeps Riley on her toes.

When a scruffy kitten appears on the farm, Riley names him Rocky because he looks like he’s already survived a few rounds in the boxing ring. But Rocky appears at the murder scene and has a nose for investigation. Will Rocky become Riley’s sleuthing sidekick?

Rocky is my nod to Koko and Yum Yum, the cats in The Cat Who series. He’s an inquisitive little thing. Though he leaves most of the sleuthing to Riley, he’s usually where the action is.

Will readers become familiar with Riley’s “Rhode Food” blog? Will there be excerpts?

What a great idea! There will be now!

You describe a waffle iron to make waffle cones, but waffle cones are thin and crisp. Is this a different type of waffle iron than those the home cook is used to? Are the waffles fried and then rolled while they are hot?

When was Riley in the army? Helicopter crash?

Riley went in the Army right out of college. The crash occurred during a training mission in her first year, so her dream of being an army officer was crushed. After rehabbing from several broken bones, she returned to running, a passion of hers in high school, and decided to follow her love of books into a library degree and an eventual job at the CIA library (yes, they have their own). Riley’s background and training in the army, plus her frequent travels, put her on the radar of some higher ups at the CIA and she was approached about doing occasional missions.

Why do Caroline and Riley indulge Sprinkles in her obnoxious habit, which is? (It makes me shudder!)

I didn’t think it was possible myself, until I saw a friend’s cat do it. We don’t want to spoil anyone’s breakfast, so I won’t say what it is here. Read the book and find out!

Wouldn’t the alcohol in Boozy ice cream prevent it from freezing? Is it more of a slushy?

Yes, alcohol lowers the freezing point of ice cream and sorbets, and an ice cream maker must take that into account. What Buzzy called Margarita Ice Cream is more of a margarita sorbet, and it gets even more delicious as it melts into a slushy.

How much ice cream research did you do to create the series? Was it fun? Delicious? Did you try to make any at home? Brownie Bomb, Peach, Sun Flower…homemade marshmallow topping…all of them sound like treats!

First lobster and now ice cream! Suffering for my art! I’m spoiled. I love taking road trips and followed lots of back roads to some fantastic ice cream shops. Because I set the shop in the eastern part of Connecticut, I concentrated the research there and discovered some fabulous ice cream shops: Buttonwood Farms (which also inspired the book’s sunflower festival), the UConn Dairy Bar, Michael’s Dairy, We-Lik-It – I ate a lot of ice cream while writing this book.

Like many people in 2020, my husband and I spent a lot of time at home, and decided to invest in an ice cream maker. That little machine has earned its counter space. There’s a batch of chocolate chip ice cream going right now.

What’s next for Riley?

Riley will be back for at least two more books. Book Two’s working title is Mint Chocolate Murder, and the murder will take place during a fantasy ice cream social. I’m having a lot of fun dreaming up ice cream treats for that one. 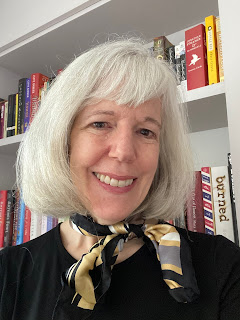 Congratulations, Shari. Best wishes for the new series and pen name. Sounds like another winner.

Okay, I’m hooked! Besides as a cat owner and former president of a cat shelter, I need to know what Sprinkles does when peeved – I could tell some cat stories here, but Piper has a paw to my head 😊

Congrats on a new series and name! I'll always remember this book's release in conjunction with the debut of mac and cheese ice cream.

Congrats on the new series...... Other than pizza, you picked something I can't wait to devour (your book, that is)

Now I'll go see if I need to put my morning banana and blueberries on ice cream.

Thank you, Jim! I hope you're right!

Kait, now I'm dying to hear those stories! Do tell!

Margaret, would you eat that ice cream? I'm definitely not going to go looking for it.

Debra, let's get a pizza and some ice cream!

KM, the ice cream research has been a hoot. I even have my own ice cream maker now!

Best of luck with your new series! It sure sounds like a winner.

Congratulations! I look forward to reading your new series. It sounds wonderful.

Love your writing, Shari. Keep up the great work! I'm a fan.