We are probably all familiar with the term “YOLO” by now. “You only live once” was a thing tossed around to validate careless or risky behavior. But the older I’ve gotten, the more value I see in the term. Not for risky behavior, of course, but more as a “why are you not doing this?”

I’ve shared before that I was motivated onto the journey I’m on now when a friend said, what are you waiting for? I had turned forty at some point previous to this and had thought about writing for years, but thought yeah, what am I waiting for? I’ll only live once! My husband made the point that you can’t make the hole if you don’t take the putt. (He’s a golfer.) Or, more famously, Wayne Gretzky said, “You miss 100% of the shots you don’t take.” In other words: YOLO.

At some point in my thirties, I got the wild hare to run a half marathon. I wasn’t ever a runner, but a swimmer, and some friends talked me into a short triathlon. After surviving that—and enjoying the training—I YOLOed that puppy, jumping right in and signing up for a half marathon. I didn't worry myself with doing a 5K or 10K first, building up from the shorter lengths. A few years and a few half marathons later, I signed up for a full marathon with that same lack of firing synapses. That’s 26.2 miles of limp, fizzled synapses for anyone unfamiliar with running distances, but at least it was in lovely Edinburgh, Scotland. (Destination runs are the best!)

But as with most things, if you don't prepare enough, it's not going to end well.

The “oh heck, why not—you only live once!” was beat into the ground one metallic step at a time by a man in a full suit of armor. I kid you not, shortly before the halfway point of the marathon, I was running so dang slow that a man in an actual suit of armor caught up to me. I could hear the clang of his metal feet as he got closer, and closer… I was in physical pain, tired, and just had had enough. That knight in shining armor squelched any motivation I had left. 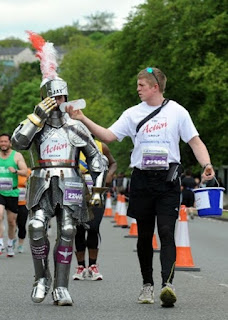 Absolutely true story, and this is him.

As we approached the halfway mark together, I wished him luck with his charity (his feat was a fundraiser), stopped, turned around to wait for the van that follows the end of the race. Imagine my surprise when I saw it was only about twenty feet behind me. I was literally in last place. But I had to consider my attempted marathon a half marathon instead—a completed half, instead of a failed full.

I ran one more half marathon after that one (an actual half that time), and then stopped running all together. I stopped running because I was failing by my own standards. Not anyone else’s. My kids and husband were proud of me simply for doing it. No one cared that I ran slower than a pregnant whale, and yes, I know whales don’t have legs.

When it comes to writing, you can’t be afraid of what others think. I mean, you can’t even let what you think stop you, as the imposter syndrome, like that knight in shining armor, can be strong. They are your words, no one else’s, and you’ve got to YOLO past it.

To struggle as a newbie author is pretty much a given. You have to look past the rejections and keep trying. It’s not failure if you’ve learned something. It is not personal. It’s just another rung on the experience ladder, another mile in the marathon. There might be some hills, or you might have to adjust plans—my marathon being self-redesignated as a half marathon—but keep chugging away, one foot in front of another, with the end goal in mind. Prepare yourself, because writing the book itself is just half the battle. 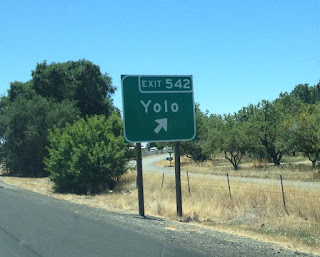 Exit sign for Yolo, CA. And no, I didn’t YOLO and take the exit.

So, what have you YOLOed? Or are you still waiting?

And if you are waiting, why? Get on out there. Take Exit 542 to Yolo and get going!

Lovely, Rosalie. I’m afraid I’ve YOLOed often. Started at a young age with jumping out of an airplane at the tender age of 16 – I lied and said I was 18. Why. Well, why not. Been doing it ever since. Despite being a runner, I have never run a half or a full marathon. Kudos to you for taking on the challenge. And as for the guy in the suit of armor. Triple kudos to him. My gosh that must have been hot! Bring on the Gatorade.

I maintain a bucket list that I have been whittling away over the years. Flying in a glider plane during hawk migration is still there. Covid-19 killed my most recent opportunity. Your piece is a good reminder that I need to work on that one.

Very amusing, Rosalie. I could never run any percentage of a marathon. I salute you.