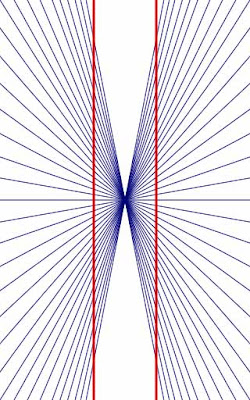 We call ourselves homo sapiens, meaning the wise or clever human. If ever there were a mislabeled product, we homo sapiens are it. Our big brains are easy to fool. Optical illusions use foreground or background to convince us to see something that isn’t there. This webpage has many terrific examples of optical illusions that “bend” straight lines (image on the right), make two lines of equal length appear to be longer and shorter, make the same color appear different to us, and more.

For example, in store one, you find a piece of attractive clothing in your size on the “remainder” rack. Its price tag shows mark-downs in stages from $149 to the current price of $39. What a bargain, almost 75% off. It’s not that you need it, but there’s only one left . . .and you buy it.

In a parallel universe, you find a piece of attractive clothing in your size on the “new arrivals” rack priced at $39. The surrounding racks have similar clothing priced at $29, $25, and $19.95. It would look nice on you, but you walk away without a whiff of regret.

Same clothing, same price, different result because surrounding clues affected your perception of the item. The first store presented you with a super-attractive “bargain.” The second presented you with the most expensive item of its kind.

Marketers know how to trick your mind. Restaurants will include an entrée priced well above anything else on the menu making the other entrées appear “reasonable.” Here’s an interesting article on other tricks restaurants use.

We often use anchoring when we make estimates. Quick: in five seconds give me your best guess of what the product of (1x2x3x4x5x6x7x8) is. Tick Tock. Tick Tock. Your guess is _________? In an experiment, guesses averaged 512. The same experiment asked a different group the question with the numbers reversed (8x7x6x5x4x3x2x1). Those people’s guesses averaged 2,250, more than four times higher than the first group. The actual answer is 40,320, demonstrating we’re lousy at math, but also showing that by starting with small numbers, we guessed a smaller result when presented with larger numbers first.

We build our knowledge of the world bit by bit, comparing the most recent information to what we already “know.” The first article of clothing seemed such a good buy because we anchored around it sitting on a “remainder” rack with a high starting price. We have a false confidence in our “knowledge” and give it priority over new information, especially if that information contradicts what we “know.”

That is why first impressions are so important for people. They become our anchor. We evaluate future actions given the model of the person we have accepted. If the first time we see someone, they are helping a little old lady cross a busy intersection even though afterward they return across the street and head in a different direction, we think them a good person, going out of their way to help others. If the next time we see them, they are strong-arming a youngster into the back seat of a car, we sympathize because we’ve all had to deal with our kids when they had a hissy fit about doing what we wanted when we wanted.

But, if the first time we saw the same person, one police officer was handcuffing him while another comforted a crying youngster, we’d have a vastly different reaction when we saw the “bad” guy strong-arming the child into the back seat.

Readers, step close and let me tell you a secret: authors manipulate you the same way marketers do. Shocking, I know. We show a character performing a nice or heroic act early in the story to “make” you like the person, and that positive vibe carries through even if later they’re going to do some nasty things. This trope even has a name: “save the cat.”

We create red herrings or hide clues by giving you false anchors. In Granite Oath (Seamus McCree #7), releasing at the end of August, a trail camera photograph shows two male thieves, one tall and the other considerably shorter. I think of myself as tall (I’m a six-footer), and so I picture the tall guy is my height, maybe a few inches taller. The short guy must be around 5’4 – 5’6”. Turns out the tall guy is nearly seven feet, and the short guy is taller than me.

When an author pulls the wool over my eyes, I enjoy flipping pages back to discover how they tricked me. Anchoring is often involved.

I’d love to hear in the comments about your fictional reading or real-life anchoring stories.

Very interesting! How clever of you to make that connection. I've never thought of the similarities. And even though I feel I'm pretty savvy when it comes to marketing tricks, I must say, I do fall for them from time to time. Congratulations on your latest in the series releasing in August.

Thanks, Korina. We're all susceptible. All we can do is try to be aware.

This is fascinating, Jim. I bet anchoring accounts for how we can return to a place and think, "It's so much smaller than I remember!" This is great stuff to chew on. Thanks!

No examples from me, but I’m still digesting the product example.

Interesting! I've shopped for far too long to fall for deceptive pricing practices (2 for $50 or $19.99 each). In addition, I told my kids a savvy shopper could calculate percentages and mark-downs in their heads.

I also agree that the best antagonists have some redeeming qualities.

Molly - you betcha -- when our eyes become higher off the ground, it gives us a different perspective.

Margaret - With smart phones, everyone should be able to calculate percentages and mark-downs. -- Not that they do, of course.