Juggling Two Series with One Memory by Susan Van Kirk

A decade ago I spent five years living as a snowbird in the Phoenix/Scottsdale area of Arizona. One of my happiest memories from that time was going to The Poisoned Pen bookstore to listen to intriguing mystery writers like Ian Rankin and Thomas Perry. They always ended their interviews graciously answering questions from those of us who devoured mysteries but didn’t write them.

I have so many memories of those magical evenings, but a particular night has stayed in my mind. One of those authors—who shall remain nameless—attempted to answer a specific question about a plot event in one of the series he’d written. At the time I was curious about his inability to remember the event in question, or which book it was in. That’s crazy, I thought. Why doesn’t he remember his own writing? Years passed without a satisfactory answer to that question. 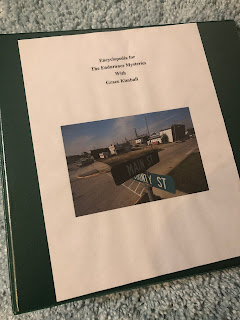 Flash forward to 2022. For ten years now I’ve had the luxury of writing one series, the Endurance Mysteries. The small town of Endurance, the main characters and contributing characters, the history of the area, and the events of the four books and one novella are firmly imbedded in my mind. I also have a looseleaf encyclopedia of those elements so I can look up details that might escape me while drafting book number five.

It’s true I also wrote A Death at Tippitt Pond during that time, a standalone book that didn’t particularly mix me up when it came to a different town, new characters, and other details. It had a more historical milieu than the earlier series. I had ended (I thought) the Endurance series, and my mind was strictly focused on this new book.

However, a pandemic and the magical stirring of unpredictable life events sent me down a different path. I signed a contract for a new series while making the decision to extend the Endurance Mysteries.

Death in a Pale Hue, which will come out in June from Level Best Books, is also about a small town, but this town is called Apple Grove. The protagonist, Jill Madison, is almost thirty years younger than Endurance’s Grace Kimball. However, their towns are similar and every so often I found myself typing “Grace” instead of “Jill,” or “Endurance” instead of “Apple Grove.” Thank goodness for word searches and a diligent editor.

On top of that, I occasionally must hold myself back from adding a scene in Apple Grove that’s like a scene from Endurance. I find myself thinking of crossovers that might be nice advertising gimmicks for two different shows on television, but that kind of gimmick won’t work using two different mystery series.

As I wrote Death in a Pale Hue last year, I was already thinking about the fourth mystery in the town of

That book came out in September 2021, and now I’m beginning the second book of the Level Best Book contract called Death in a Bygone Hue. So I think writing each series separately will work, but I do worry that I’ll get mixed up when answering a question at a book event. Will I mistakenly say “Jill” instead of “Grace,” or “Endurance” instead of “Apple Grove?” Will someone ask a question that stumps me because I now have two different universes colliding in my head?

It certainly answers the question I had about that author I heard years ago who couldn’t remember which character, which book. I’m walking a mile in his shoes.

I can’t wait to read the Apple Grove books, and like many readers, thrilled that the Endurance mysteries are continuing. You’ll do fine in the Q and A. You’ll see!

Thanks, Kait. I appreciate your support and can’t wait for both series to carry on.

You'll be fine. Ask the audience for help. And, congratulations on juggling two series!

Ha,ha. Yes, help will be helpful.

Looking on the bright side, juggling two series with one memory is better than juggling both with half a memory. Congratulations on all your wonderful books!

Oh boy! two series. I get mixed up moving from one short story to the next when writing them.

Speaking as someone who can't remember what I did with my face mask, I admire your perseverance and am awed by the juggling act.

keep juggling .. love the way you draw your characters, so I am sure I will enjoy the new series as much as the first (and will be able to prompt you if you get confused).

I'm hooked on the Endurance series and look forward to the next, but I will understand any gaffs. After naming my book Saving Irene, I kept referring to it, even in print, as Saving Grace. That just seemed to roll off my tongue!

Oh, Molly. Your comments always make me laugh. Thanks.

I guess, Vicki, we'll see if that happens to me. Crossing my fingers.

Kathleen, I am heading in your direction. Many times I've ventured toward a store door and realized I needed to go back to my car for my mask.

Thanks, Debra, for the offer to help. I may need it.

I can understand that, Judy. "The only saving grace is...."

Susan, I have no doubt you'll manage beautifully! Congratulations!

In my first full-length novel, The Blondness of Honey, written 11 years ago, I had two main protagonists, both women, and a secondary protagonist, also a woman (because: first book--must include every permutation of personality and character arc known to man!). All three women had different color eyes in the first third of the book, then traded eye color in the middle third, and I ended up with three brown-eyed beauties in the last third. In this same book, I had a romantic scene with two people and five arms because, see, I needed an extra arm to help with the Olympic-class machinations and body gymnastics as one leaned over a couch in an awkward attempt to...oh who knows! Even five arms didn't help that unholy mess! Only SOME of this has to do with memory. The rest is pure physics, and that's why I'm a writer instead of a physicist. Editors and beta readers have saved my pages as examples of what not to do!

At a conference I attended years ago Tim Hallinan was interviewed by someone who prepared by reading all his books. In one fun segment, the interviewer asked Tim in which novel certain things occurred. The audience ALWAYS knew the answer.

When in doubt, crowdsource.